Fehim Taştekin: “After gestures to US, Turkey turns to placating Russia” 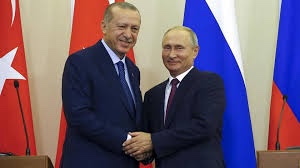 Turkey is back to its balancing act between Moscow and Washington after a series of moves to win favor with the Biden administration at the expense of irritating Russia.

The lead-up to the June 14 NATO summit saw Turkey take a series of steps in the Black Sea region to impress its Western partners and defuse tensions with the Biden administration at the expense of irking Russia. In its increasingly wearying game of playing Washington and Moscow against each other, Turkey has now turned to soothing and assuring Russia.

Foreign Minister Mevlut Cavusoglu hosted his Russian counterpart Sergey Lavrov in the Mediterranean resort of Antalya on June 30 to discuss a broad range of issues, from regional conflicts and Turkey’s controversial purchase of the Russian S-400 air defense systems to joint vaccine production and the resumption of Russian tourist flows to Turkey. Ostensibly, Lavrov left the meeting with the impression that Turkey would not bow down to US pressure to ditch the S-400s as well as assurances that Canal Istanbul — a planned artificial waterway parallel to the Bosporus  — would not disrupt the 1936 Montreux Convention, which Russia values as a safeguard restricting the access of Western naval forces to the Black Sea.

In a bid to mend fences with the West, President Recep Tayyip Erdogan has recently made notable investments in the anti-Russia front, selling drones to Ukraine and Poland and opening the Montreux Convention up to discussion at a time when the United States and Britain are eager to boost NATO’s presence in the Black Sea. In his latest move to win favor with Washington, he offered a Turkish military mission to secure Kabul’s airport after US-led NATO forces complete their withdrawal from Afghanistan in September. In return, he was hoping for gains in tough dossiers with Washington, including the S-400 row, the US trial of Turkish public lender Halkbank for helping Iran evade sanctions and Washington’s support for the Syrian Kurds.

Though Ankara’s gestures have failed to produce any visible change in Washington’s posture, they did help save appearances when Erdogan and Biden met for the first time as presidents at the NATO summit. Erdogan returned from Brussels somewhat relieved and with more room to maneuver, glad to have deferred — for now — a fresh escalation in bilateral ties and its potentially destructive impact on the ailing Turkish economy.

Russian President Vladimir Putin closely watched Erdogan’s efforts to sell Biden a midway formula on the S-400s and signaled his displeasure at Turkey’s close engagement with Ukraine and Poland when he reportedly spurned Cavusoglu’s plan to lead the Turkish delegation that traveled to Moscow in May to discuss the resumption of Russian tourist flows, disrupted by the COVID-19 pandemic. NATO military drills in the Black Sea and a British destroyer’s entry into Crimean waters made Lavrov’s visit inevitable.

In an apparent sign that Moscow is willing to ignore Ankara’s zigzagging for the sake of the strategic value of bilateral ties, Lavrov hailed Ankara’s “principled position” on the S-400s. Similarly, by resuming tourist flights to Turkey and supplying it with COVİD-19 vaccines, Moscow sought a “soft landing” after the bilateral frictions over Ukraine.

Ankara, for its part, is desperate for a positive agenda with both the United States and Russia, even as thorny dossiers remain stagnant. Erdogan had at least 19 phone calls with Putin last year and six in the first half of 2021. He is eager to please Putin nowadays, hoping for 5 million Russian tourists this year as a vital source of hard-currency revenues. Only about 560,000 Russians traveled to Turkey in the first five months of the year. Due to the pandemic, their numbers had dropped to about 2 million last year from 6 million in 2019.

This extraordinary dynamic in Turkish-Russian ties does not mean that Moscow has acquiesced to Ankara’s alignment with Kyiv against the Russian annexation of Crimea, support for Ukraine’s and Georgia’s bids to join NATO and collaboration with Poland’s anti-Russia agenda; both sides appear pressed to preserve a positive outlook, as evidenced by the talks in Antalya.

Cavusoglu said Turkey would continue to work with Russia on advancing a political settlement in Syria, maintaining “the quiet on the ground” and keeping humanitarian aid corridors open, while both ministers emphasized the Astana platform as the only effective negotiation format on Syria. Referring to US collaboration with the Kurdish-led Syrian Democratic Forces (SDF), Lavrov denounced “unacceptable” attempts “to promote separatist tendencies” in northeastern Syria. He said that Idlib — the northwestern province controlled by Islamist rebels — was also discussed, but spoke of no fresh understanding there despite escalating tensions, saying only that the Astana troika, made up of Russia, Turkey and Iran, would meet soon to discuss relevant issues.

Turkey’s calculus ahead of the Biden-Erdogan meeting rested on hopes it could convince Washington to at least confine its support for the SDF to the fight against the Islamic State in return for Turkey making things more difficult for Russia to the west of the Euphrates. Several deadly attacks on Turkish soldiers by unknown forces were widely seen as an indirect warning from Russia.

Still, Lavrov expressed satisfaction with the discussions on the issue. “During the talks, we stated that the plans for building the Istanbul canal will in no way affect the parameters of the presence of the foreign countries’ navies in the Black Sea,” he said. Russia apparently sees no urgency to play up the issue amid widespread doubts that the canal would eventually see the light of day. And as long as the Montreux Convention remains in place, the canal could be even beneficial for Russia as a second waterway into and out of the Black Sea.

On the issue of the S-400s, Lavrov expressed appreciation for what he described as “our Turkish friends’ intention to use the first Russia-supplied regiment of S-400 Triumph antiaircraft missile systems to ensure their defense capability.” His words might have sounded unsettling to Washington, but they might be also intended as a mere encouragement to Turkey, though the detailed terms of the S-400 deal remain unknown.

Another development on which Russia’s reaction mattered was the Shusha Declaration that Erdogan and his Azerbaijani counterpart Ilham Aliyev signed in June in Shusha, the main trophy that Turkey-backed Azerbaijan took from the Nagorno-Karabakh war against Armenian forces last year. Lavrov said Moscow saw Erdogan’s trip to Shusha as part of Turkish-Azerbaijani ties, adding that Russia and Turkey remained committed to promoting normalization between Azerbaijan and Armenia.

Yet Russia appears in no hurry to open the so-called Zangazur corridor under the terms of the cease-fire deal it brokered in November to end the fighting in Nagorno-Karabakh. Ankara sees the route as an opportunity to advance its strategic interests in the Caucasus, but it is no secret that Moscow is irked by Turkish quests for more influence in the region, especially through any military presence beyond the Russian-Turkish monitoring center inaugurated earlier this year. And if Moscow chooses to hold back its annoyance today, it is because Putin trusts Aliyev more than Armenian premier Nikol Pashinyan.

As for Libya, where they have backed opposing forces, Turkey and Russia have yet to take further action after a tentative understanding they reportedly reached at the Berlin conference June 23 to begin mutually withdrawing foreign fighters.

In sum, the conflicts in Syria, Libya and Nagorno-Karabakh continue to test Turkish-Russian ties as they alternate between rivalry and collaboration. Turkey’s bold involvement in NATO plans in the Black Sea has come as a serious challenge for Russia, prompting Moscow to remind Ankara of its red lines on Crimea. A series of risky and ill-calculated moves, from interventions in Syria to the S-400 purchase, have left Erdogan stuck between the United States and Russia, leading him to play the two powers against each other. Though this vicious circle may have paid off at times, it has failed to extricate Turkey from its self-made entrapment. And the more it repeats itself, the more wearying it becomes for Ankara.