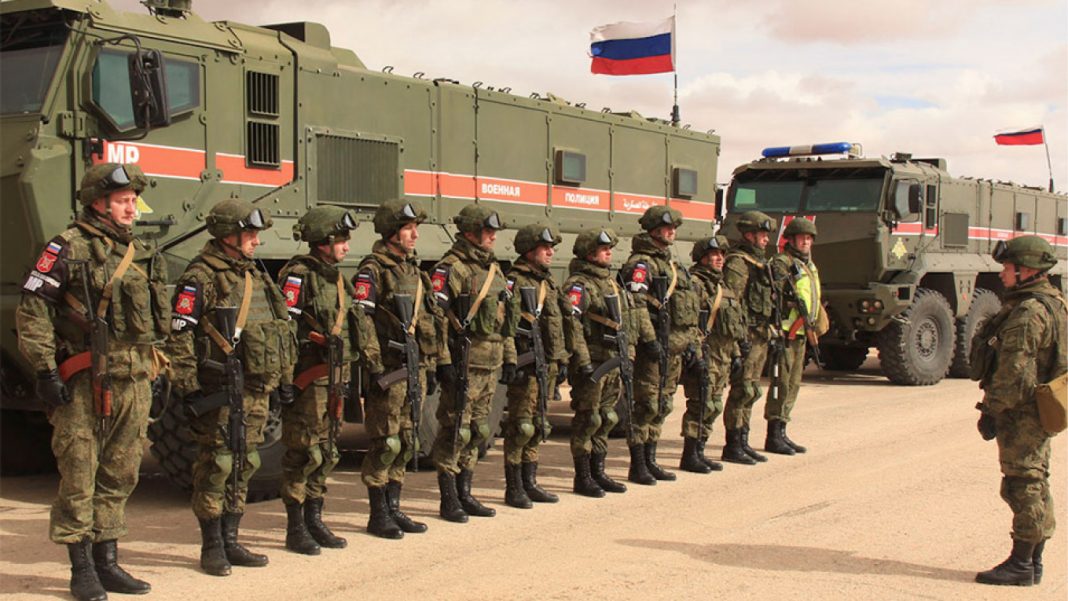 How the presidential changes in the USA will change the balances of power in the Middle-East for Russia? Is Moscow hoping the final months of outgoing President Donald Trump’s presidency will allow it an opportunity to reinforce its positions in Syria?
Anton Mardasov provides a framework to answer these questions. You can read his article published at Al-Monitor on 14 December 2020.

While Russian foreign policy circles have noted reasons why President-elect Joe Biden’s administration may see the Middle Eastern theater relegated further down the list of American policy priorities, Moscow sees the lame-duck period of Donald Trump’s presidency as an opportune time to shore up its positions in Syria.

This gap between the analysts’ expectations and the Kremlin’s real agenda is hardly surprising. One key feature of Russian policymaking in the Middle East is its fragmentation, with the opinions of the security services and private military organizations carrying the greatest weight. President Vladimir Putin remains the ultimate authority and beneficiary of the Russian strategy and has the last say on all the key decisions. In this scheme of things, the expert community is not supposed to advise the Kremlin or even explain its actions. All that is expected of experts, instead, is validating and justifying the authorities’ decisions post-factum.

The Russian military’s decision to set up positions around the northeast Syrian town of Ain Issa is one manifestation of Moscow’s activity during the current turbulent period. The move became possible thanks to the deal Russia made with the US-backed Syrian Democratic Forces (SDF). The deal’s aim is to reduce attacks from nearby areas controlled by Turkey and the opposition. However, few entertain illusions that the deal amounts to an improvisation on the part of the Russians in order to ease tensions in the region. Russia and Turkey coordinated their efforts to undermine the SDF, even when the tensions between the two countries had escalated after the shootdown of a Russian SU-24 aircraft. Moscow also facilitated contacts between Ankara and Damascus on the Kurdish issue on different platforms, including through Algeria.

According to a source knowledgeable on Russian military activities in Syria, Ankara and Moscow are doing their best to avoid provoking the Kurds and the Americans in the region to limit the possibility of a conflagration. Instead, they act in a somewhat “hybrid” fashion, the source told Al-Monitor. Thus, soon after Turkey’s attempt to press the Kurds in Ain Issa, Russia suggested the SDF either vacate the region or transfer it under the control of Syrian President Bashar al-Assad. Yet in the end, the two sides agreed that there would be a presence of Russian forces in those territories. This way of resolving the situation appears palatable to Ankara, as it gives it greater leverage in negotiations with Moscow, even though stationing Russian military elements in Ain Issa may spawn new contradictions between the two sides, the same source said.

Apart from that, Moscow is taking a more active stance in eastern Syria. The reason for this lies not so much with Russia’s participation in the Operation White Desert, aimed at clamping down on Islamic State (IS) diversion groups, as it does with its desire to avoid being associated with the subversive tactics employed by the Syrian intelligence services on the territories controlled by the Autonomous Administration of North and East Syria. Despite regular “road wars” between Russian and American military patrols, it is becoming increasingly obvious that the reasons for Russia’s strategic pause are traced to Moscow’s reluctance to be associated with the actor who is eroding the quasi-autonomy of the Trans-Euphrates region to preserve its ability to act as a mediator. Yet today it is becoming more and more obvious that the Russian presence accompanying the Syrian military in Trans-Euphrates will be expanded, especially provided IS’s increasing activity. This already led to the introduction of curfews along the M20 route.

But it is not just Moscow and Ankara looking to strengthen their positions and expand the range of options in dialogue and negotiations with an incoming US administration, which made clear it would not engage in direct negotiations with Assad or conceive of the political-window dressing in Syria as genuine change.

Tehran, too, is placing its hopes on the Biden administration’s ability to turn the page and seek a new form of compromise with Iran. Russian diplomats who are familiar with the situation in Iran and with whom Al-Monitor spoke to are not optimistic about the possibility of a restoration of the 2015 nuclear deal, though. Yet they do expect earnest and comprehensive negotiations between Washington and Tehran on various matters. Yet the Iranians must understand that any attempts at renegotiating the 2015 deal would likely include guarantees to limit Iran’s opportunity to be involved in the Syrian politics. Against this background, Iran is tentatively raising the stakes by ramping up its recruitment of Syrians to the branches of Shiite international forces in the Trans-Euphrates. Basically, Tehran ramps up activities it knows it can then roll back. All this should give Tehran enough leverage for negotiations and a range of items they could give up in negotiations. In the last few years, the Iranians have established a multitiered presence in Syria. This includes not just strengthening the Fourth Division commanded by Maher Assad, the Syrian president’s brother, or an increase in the influence of the Iranian formations within the Republican Guard, but also such projects as building electric power plans with the transmission network reaching all Syria’s provinces.

Activity overseen by the Autonomous Administration in the Trans-Euphrates region is also telling. The conference held by the SDF political wing — the Syrian Democratic Council (SDC) — was notable not so much due to the administration’s attempt at becoming a legitimate force by raising the prospect of new reforms as due to the presence at the events of the representatives of Moscow and Cairo platforms along with the genuine Syrian opposition. As Al-Monitor previously noted, those platforms are viewed by Moscow as an opportunity to bring the Kurds into political negotiations. Leader of the Moscow opposition platform Qadri Jamil, meanwhile, is viewed as a key lobbyist of Russian interests in Eastern Syria. During the SDC conference, Jamil praised the flexibility of the SDF and described its model as “the guarantee for eradicating Syrian corruption” before criticizing the breakup of the country and the US actions in an interview with Russian media.

By dealing with Jamil and other such figures, the Kurds leave room for establishing a model of viable coexistence with Damascus. That said, Al-Monitor’s sources in Russian security services do not place high hopes in the possibility of the Kurds’ deal with the Syrian regime. This skepticism can be explained by several reasons.

First, despite all the contradictions, the United States and Turkey can still find viable common ground on the Syrian dossier. Turkey is not just involved in schemes for the sale of Syrian oil via Iraqi Kurdistan and enjoys US support with regard to its action in Idlib. It is also a key actor the Americans rely upon to check Russia’s actions in Syria, a role that under the Obama administration was allotted to the European Union.

Second, while the United Arab Emirates and Egypt maintain contacts with the Assad regime (with Cairo and, according to some sources, Director of Egypt’s General Intelligence Service Abbas Kamel, doing their best to bring Syria back to the League of Arab States), the situation remains precarious. According to several Al-Monitor sources, Saudi Arabia is looking to increase its role in Syria, but not in a way conducive to the Syrian regime. Given the lack of Trump’s clear position on the Syrian dossier, the Saudis along with the UAE and Egyptian delegates have on multiple occasions visited SDF-controlled territories. Yet now Riyadh sees cooperation with the Syrian Kurds and tribes not as an insurance policy and an attempt to disseminate their influence beyond Damascus but as a necessity to support the “alternative vision of Syria.”

Despite the ongoing rumors concerning Saudi Arabia supposedly walking back its support for the SDF, there are signs that Riyadh is intensifying its activity in the east of Syria, a source in the Kurdistan Workers Party and a source close to the Russian Ministry of Foreign Affairs told Al-Monitor. Saudi Arabia is also trying to block efforts by Syrian and Iranian intelligence to win the sympathies of Arab tribes, they added.

Efforts by Damascus and Moscow to cultivate closer commercial ties with Saudi Arabia and the UAE via using border crossings in Jordan and Iraq are also facing hurdles. Should the United States tighten up the enforcement of sanctions stipulated by the Caesar Act, it may well force Syrian allies to rethink their current tactics of sanctions avoidance. Moreover, they may have to review plans for the planned reconstruction projects (that remain largely ceremonial in their character, as things stand).

Anton Mardasov is a military affairs expert and journalist focusing on Syria, Iraq and extremist organizations. He is also a non-resident expert at the Russian International Affairs Council (RIAC) and also writes about Syria as a non-resident scholar in Middle East Institute’s Syria Program. On Twitter: @anton_mardasov