‘Nothing left to burn’: wildfires and floods could turn the tide on Turkey’s climate policy – Guardian 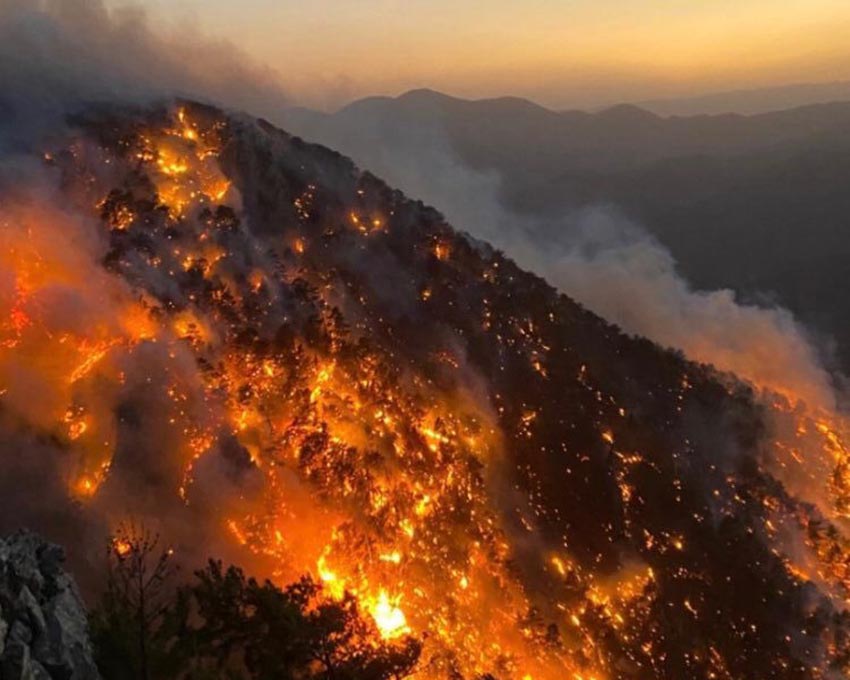 « Can a government addicted to concrete and profit turn around an appalling environmental record? » asks Bethan McKernan in Guardian.

Everything in Muhammet Şahin’s garden is dead: the plants, his chickens, the bees. This summer’s unusually ferocious wildfires in south and west Turkey swept down on to his restaurant in the village of Osmaniye from two directions. As the flames rushed down the hillside, he and his wife had to evacuate, leaving their home and livelihood behind.

The couple have managed to pay for a new roof and fixed glass windows that shattered in fires over two devastating weeks in August, when the blazes reached a heat intensity four times higher than Turkey’s previous record. But for Şahin and many of his neighbours there is still a lot of repair work to do, and serious questions remain

“I should have extinguished it myself but the electricity was out, the water was out. That’s why we had to leave,” the 50-year-old said. “If it happens again I will stay. The state was useless. It’s as if they wanted it to burn.”

Marmaris is a popular tourism destination because of its natural beauty. But above the sparkling turquoise waters of the Mediterranean, much of what used to be dense green pine forest is now nothing more than eerie skeletons, charred and bare. Ash stirred up by the wind catches in the throat; the sound of chainsaws removing burned trees deemed too unsightly to remain near roads and resorts echoes through the dead forest.

“We didn’t understand how fast it would spread,” said Fatma Aydın, a 60-year-old who sells butter, cheese and yoghurt from her goats at a local market. She and her husband are waiting on his pension to come in next month to finish the work that needs doing on their property. “We have been devastated financially but next year I hope it won’t happen again because there is nothing left to burn.”

Much has been said and written about democratic backsliding and the erasure of rule of law in Turkey during two decades of Justice and Development party (AKP) rule. But just as destructive, and much harder to fix, is the party’s addiction to concrete: the AKP has relied on large, job-heavy infrastructure projects as the engine of Turkey’s economy.

Concerns about environmental damage have long been ignored. But this summer, a culmination of population growth, industrialisation, urban sprawl and the climate crisis has finally made it impossible for Ankara to ignore the consequences of pursuing economic growth at the cost of everything else. Last month President Recep Tayyip Erdoğan finally ratified the Paris climate agreement, ahead of this week’s Cop26 environmental summit in Glasgow.

Erdoğan faced significant blowback over state mismanagement and unpreparedness after admitting the country had no serviceable firefighting planes. According to Dr Cihan Erdönmez, a lecturer at Istanbul university’s forestry department, lessons have been learned across government after the summer fires disaster: a new fleet of planes will be established and the forestry ministry is increasing staffing levels.

“However, it should not be forgotten that fires will always occur in this geography and the climate crisis will increase the number and impact of fires. Therefore, the real solution should be sought not in extinguishing fires, but in preventing fires,” he said.

And while the summer blazes were the biggest in living memory, they are far from the country’s only pressing environmental problem. Also this August, the northern Black Sea region experienced the worst flooding on record, in which 81 people died.

The biggest drought in a decade has left major cities with severely depleted water reserves and decimated this year’s wheat, barley and lentil crops; huge dam projects that have drowned traditional life in the majority Kurdish south-east have contributed to the drought problem rather than solved it.

Large natural lakes have dried up, killing fish and birds, and rising temperatures in Istanbul’s Sea of Marmara left marine life suffocating under layers of “sea snot” released by out-of-control growth of phytoplankton.

Europe’s plastic waste, sent to Turkey for recycling, has ended up illegally dumped, burned or thrown in the ocean, while the land has been scarred and polluted by the booming gold, mineral and lignite – low-quality coal – mining industries.

“Turkish governments dating back to the 1970s have made national energy security and independence a primary goal as Turkey doesn’t have its own gas and black coal resources,” said Deniz Gümüsel, an environmental engineer and climate policy expert, who is camped out at a mining protest site not far from Marmaris.

“There is no alternative in strategy other than relying on lignite for another 25 years, which exacerbates all of the problems. The fires and floods were interpreted as part of corruption issues and poor urbanisation policies in the country. [When it comes to climate change] there is still a lot that environmentalists must do to help society connect the dots,” she said.

In a speech at the UN last month, Erdoğan made a surprise announcement that the country would finally ratify the Paris agreement on limiting global heating.

Despite being the globe’s 16th biggest carbon emitter and a member of the G20, Turkey has dragged its feet on implementing the 2015 international treaty over disagreements on whether it qualified for financial and technical support from wealthier nations.

The only other countries yet to join are Iran, Iraq, Libya, Yemen and Eritrea. It emerged that the Turkish parliament took the final legal step earlier this month after Ankara was offered financial guarantees from several European countries and two development banks.

Details on the deal have not yet been published, but environmentalists believe Turkey has probably been extended a large credit line, as was the case with a similar initiative managed by the World Bank for a climate crisis strategy and action plan in 2009. Much of the $2.4bn (£1.7bn) was used to build hydropower plants in the Black Sea region, which have destroyed river systems and were blamed for exacerbating this year’s flooding.

A small green movement has existed in Turkey for many years, and the 2013 Gezi park protest movement was sparked by plans to redevelop one of Istanbul’s green spaces. But even after a summer of destruction, environmental issues remain low on the political agenda. Turkey’s small Green Left party was joined by a new Green party in 2020.

“We had no rain since March, so of course the fires were related to climate change,” said Mehmet Halil, a resident of Ormaniye who helped organise efforts to house displaced people during the fires. “Marmaris relies on tourists, they come and go, they don’t have to care … But this is our land. We will protect it.”