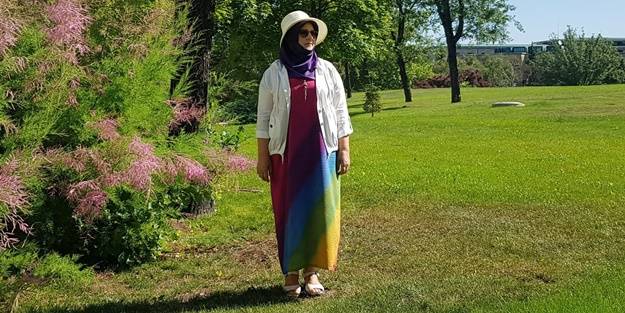 Hüda Kaya is a Turkish journalist, writer, activist and politician of the Peoples’ Democratic Party (HDP). Since June 2015 she has been member of the Turkish parliament, representing her Istanbul constituency. At the core of her political activism, Kaya fought against the Headscarf ban which she considered against the free will of a woman. In 1998 Kaya went to prison for 2 years, condemned for taking part in a protest against the headscarf ban and an article she has written.

Her gesture wearing a dress in rainbow in response to the police violence that took place against LGBT people during the Istanbul pride is the embodiment of Turkish society’s desire to unite its many colors, identities, against a polarising, marginalising and violent state. Bianet new network states:

Amid mounting discrimination, hate speech and violence against LGBTI+s, HDP’s Kaya says, “In the face of those who are enemies of everything other than a single color, I came to the Parliament today in the most beautiful colors of nature, with rainbow…”

In the wake of the police violence against the 19th İstanbul Pride March on June 26, Peoples’ Democratic Party (HDP) MP Hüda Kaya has gone to the Parliament in the colors of the rainbow, which are cited as « a reason for intervention » in protests and demonstrations in Turkey.

Wearing a dress in rainbow colors, Kaya has shared her pictures from the garden of the Grand National Assembly of the Turkey (TBMM) in the capital city of Ankara, attaching the note:

In the face of those who are enemies of everything other than a single color, I came to the Parliament today in the most beautiful colors of nature, with the rainbow…

Most recently, the LGBTI+ community as well as journalists, lawyers and rights defenders were met with heavy police violence during the 19th İstanbul Pride March, which was to be held in Taksim, but banned by the Sub-Governor’s Office of Beyoğlu earlier on June 26, 2021.

While the detention of Agence France-Presse (AFP) photojournalist Bülent Kılıç with his neck being pressed by police has caused a public outcry, especially among journalists, who then protested it in three major cities of Turkey, saying, « We cannot breathe« , Amnesty International has documented that « police detained at least 47 people, including two minors, one lawyer and a trainee lawyer and the journalist Bülent Kılıç » during the intervention against the Pride March in İstanbul on June 26.

A few fays before the 19th İstanbul Pride March, the İstanbul LGBTI+ Pride Week Committee organized a picnic in the Maçka Democracy Park; however, the police first did not allow people to enter the park in rainbow colors, including with masks in rainbow colors, then, they intervened against the group inside the park, taking one person into custody.

Earlier this year, a group of students were also briefly taken into custody in front of the North Campus of Boğaziçi University on the grounds that they were holding rainbow flags representing the LGBTI+ community. At the most recent hearing of the court case filed against the 12 students, the international travel bans imposed on them have been lifted.