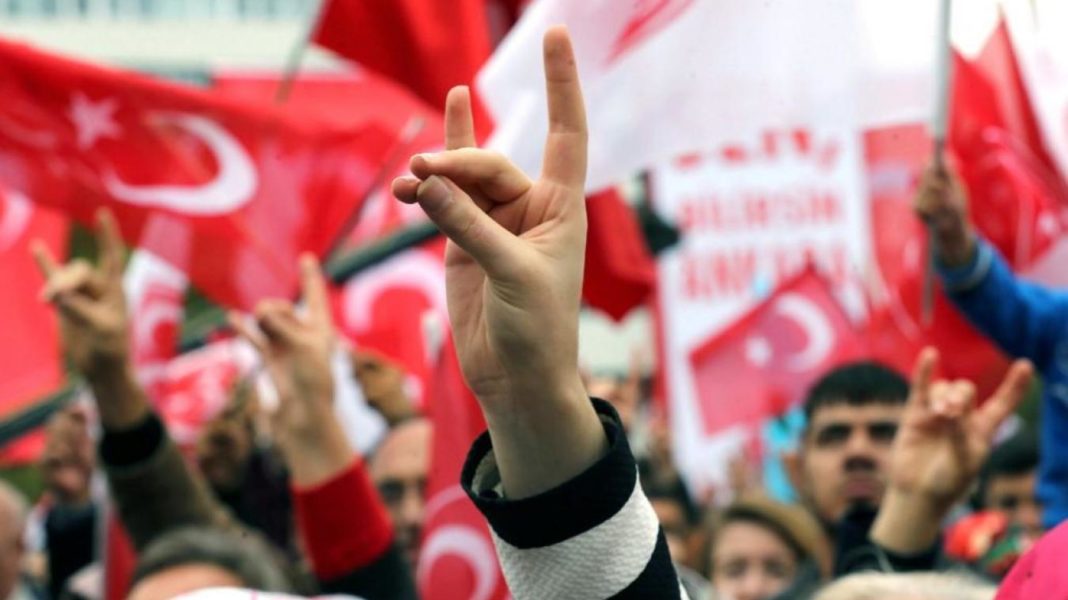 Reports by the European Parliament (EP) that decry a lack of progress on Turkey’s human rights are hardly a novelty since the European Union’s only directly elected body undertook the task of penning annual “progress reports » on Turkey in the 1990s. Neither are Ankara’s claims that the report is biased and unfair, the “toughest report ever. » Yet this year’s report, penned by Spanish Socialist Nacho Sanchez Amor, has ventured where no EP report has gone before: It suggested putting Turkey’s Grey Wolves, an ultra-right group linked to the Nationalist Movement Party (MHP), the government’s alliance partner, on the EU terror list.

The parliament called on the European Council, the decision-making body of the union, and the member states to “examine the possibility of adding Grey Wolves to the EU terrorist list.” The list includes four groups from Turkey: the Kurdistan Workers Party (PKK), the Kurdistan Freedom Falcons (TAK), the Sunni Salafist Great Islamic Eastern Warriors (IBDA-C) and the Revolutionary People’s Liberation Army/Front/Party (DHKP-C).

The move comes at a time when several EU countries are trying to increase scrutiny on the movement that they consider part of Turkish President Recep Tayyip Erdogan’s power abroad and marks the first time that an EU institution has linked the Grey Wolves to terrorism. Putting a person, entity or organization on the list means that its financial assets and funds can be frozen.

The EP urges a ban on the Grey Wolves associations and organizations in EU countries, close monitoring of their activities and measures to counter their influence. It is “especially threatening for people with a Kurdish, Armenian or Greek background and anyone they consider an opponent,” says the report, which passed with 480 votes in favor and 64 against at the plenary on May 19.

The EP report is “biased” and “unacceptable,” the Turkish Foreign Ministry said in an immediate statement. Turkish Foreign Ministry spokesperson Tanju Bilgic also rapped the wording on the Grey Wolves, accusing the EP members of “a lapsus mental” for seeking to ban it while tolerating the activities of Kurdish and Gulenist groups. Bilgic described the Grey Wolves as “a legal movement, which is associated with a long-established political party in Turkey.”

MHP Secretary-General Ismet Buyukataman tweeted that the decision on Idealist Hearths, the Turkish name for the Grey Wolves since its foundation by MHP leader Alpaslan Turkes in the 1960s, showed the parliament’s “hypocrisy and anti-Turkish attitude.”

While this is the first time that the EP has included the Grey Wolves in a report, European lawmakers have repetitively raised the issue of a ban at the national and European levels. Deputies from the EP’s Identity and Democracy Group, which brings together nationalist, right-wing populist and Eurosceptic parties from 10 European nations, have submitted two motions for a resolution and a parliamentary question on the possible inclusion of the Grey Wolves on the terror list in the last six months.

“Grey Wolves is a Turkish Islamist paramilitary organization known for its role in various conflicts, such as in Syria and Nagorno-Karabakh. … It has been involved in violent activity in Europe, including murders and attempted murders, in particular targeting Pope John-Paul II,” the motion by the ID Group’s French members said on Dec. 15.

At the national level, France banned the group last November, an act that further fueled tensions between Turkey and France. French government spokesperson Gabriel Attal said that the group carried out « extremely violent actions” and « incitement to hatred against authorities and Armenians, » citing an Armenian memorial near the eastern city of Lyon that was found defaced with graffiti reading “Grey Wolves” and “RTE” — the initials of the Turkish president. A statement from the Turkish Foreign Ministry mockingly said that France had banned an organization that did not exist, as there is no legal entity as Grey Wolves.

“Attempts to resort to imaginary decisions … reflects the latest contradictory psychology that this country lives in,” the statement read, but added that it was “unacceptable to ban symbols” that are « used widely in many countries and bearing no illegal aspects.” It was a reference to an earlier move in Austria to ban the wolf salute, along with several other “extremist gestures” including the two-finger sign of the PKK. While Ankara rapped the wolf salute ban, it welcomed the prohibition of the PKK salute.

In Germany, the call to ban the Grey Wolves — formally known as the Federation of Associations of Turkish Democratic Idealists in Germany — came from parties on both the right and the left. Cem Ozdemir, a Green deputy of Turkish origin, told German newspaper Die Welt that the members of the umbrella group “threaten members of the Turkish opposition and minorities in Germany. »

“The German state must protect these people,” he said. Dutch deputies have also extended a call to their government to ban the Grey Wolves, as well as seek a Europe-wide ban.

Sinan Ulgen, the chairman of the Istanbul-based Centre for Economic and Foreign Policy Studies, linked the EP resolution on the Grey Wolves to three factors. “First, there is growing perception in the EU member states that these groups have become more of an obstacle to the integration of Turks to the host country and that they are factors of instability within Europe,” he told Al-Monitor.

“Secondly, in most EU members, there is a growing far-right which has become tougher on Turkish and migrant communities. Platforms such as the Grey Wolves provide an easy target. It is no coincidence that the previous motions in the European Parliament all came from far-right groups,” he said, adding, “Lastly, bringing this to the agenda of the EP now is a sign of the state of the relations between Turkey and the EP. Looking at the overall report, those who support Turkey’s rapprochement with the EU are few, and frankly have nothing much to say, whereas groups who are against the Turkish rapprochement have become vocal.”

The report’s author, Amor, said that its tone reflected the grim situation in Turkey. The report says broad anti-terrorism provisions and the abuse of the anti-terror measures have become the backbone of “the state policy of repression of human rights and of any critical voice in the country.”

“This is the toughest parliamentary report ever on the situation in the country and a reflection of the serious and continued backsliding in the areas of the rule of law and human rights in Turkey in the last two years, » Amor said in a press conference at the European Parliament.

The report said that the EP “firmly insists … if the current negative trend is not urgently and consistently reversed,” the European Commission should recommend the formal suspension of accession negotiations with Turkey, for both sides to review in a realistic manner and through a structured and comprehensive high-level dialogue and explore “possible new models” for future relations.

“This is a conditional tense, not a downright call to suspend accession negotiations,” Engin Solakoglu, a retired Turkish diplomat who spent much of his career in Brussels and currently a columnist in Sol Haber, told Al-Monitor. Turkish EU accession negotiations are at a standstill, with no negotiation chapters opened since 2016 and none even provisionally closed since 2006.

Solakoglu said that it was unlikely that the European Council would hasten to follow the recommendation. “This is more of a political posturing on the part of the European Parliament, possibly adopted with the influence of the Armenian lobby,” he said. “Now that the EU is battling its own demons of the far right, taking a swipe at Turkish ultra-nationalists may sound tempting, but it is a move that would backfire.”

Solakoglu told Al-Monitor while some EU countries think that they are “tying the hands of Erdogan” by curbing the Grey Wolves movement, they are in fact doing just the opposite. “It is not an organization that is under the thumb of Erdogan, like International Democrats Union or others closer to [Islamist] National View.”

Selim Yenel, Turkey’s former envoy to the EU, also said that the wording on the Grey Wolves had more to do with “political posturing” than expectations of a listing. The members “are aware that listing or delisting organizations in the EU terrorism list is not a very easy affair. It took us much effort to put PKK and TAK there.”

“If there is a political will to do so, it might theoretically be done following a unanimous decision of the EU member states,” added Ulgen. “But this would mean opening a new front of confrontation with Turkey. It may also be difficult to establish a base of legitimacy for a European-wide ban on an issue that can be dealt with at national level if these organizations are involved in criminal activity.”

Nazlan Ertan is Al-Monitor’s culture editor. She is a Turkish blogger, journalist and editor who has worked in Ankara, Paris and Brussels for various Turkish and international publications, including the Hurriyet Daily News, CNN Turk and BBC Turkish Service. She served as culture and audiovisual manager for the European Union delegation to Turkey, director of the EU Information Centre in Ankara and director of communication, culture and information in Turkey’s Ministry for European Affairs.