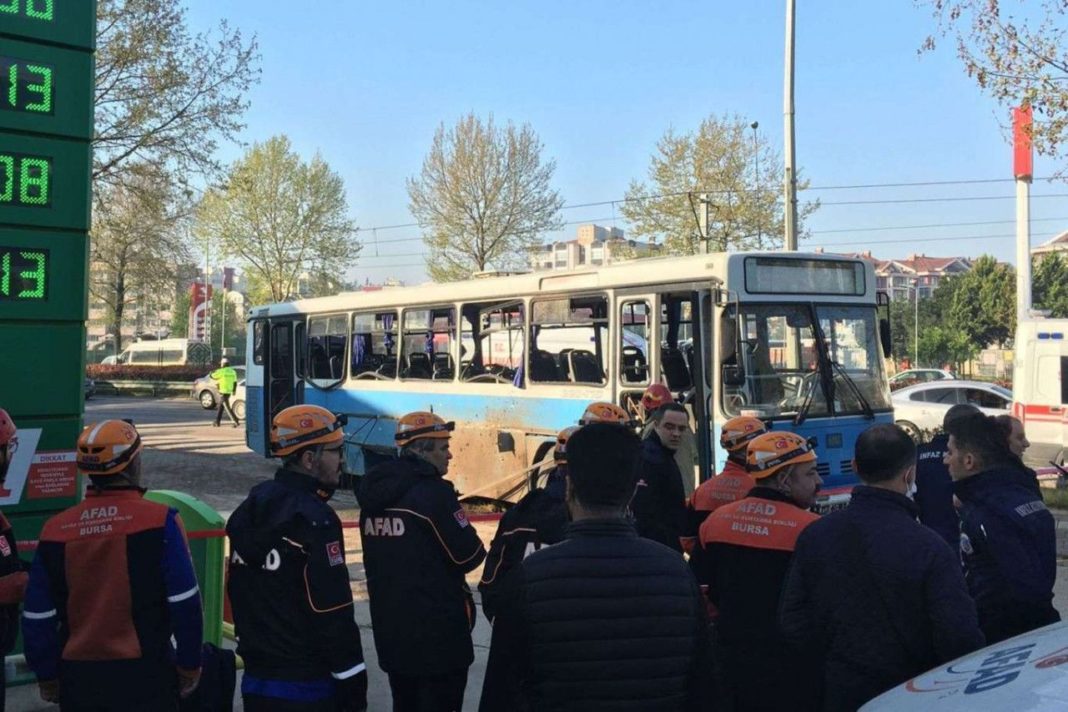 Bus bombing brings trauma of past terror back to Turkish cities

A deadly bomb attack on a bus carrying prison officers in Bursa raised the specter of a renewed terror campaign in western Turkey by the Kurdistan Workers Party (PKK).

A roadside improvised incendiary device is believed to have been detonated by remote control as the bus passed through the Osmangazi district of Bursa, Turkey’s fourth largest city, early Wednesday morning. One prison officer was killed in the blast and several others were injured.

The attacks came two days after the Turkish military launched its latest offensive against PKK bases in northern Iraq.

After the start of the Turkish air and land operation dubbed Operation Claw-Lock, a senior PKK member threatened to carry out attacks on Turkish cities. Duran Kalkan warned that the group, which is listed as a terrorist organization by most Western countries as well as Turkey, would “move the war to Turkish cities.”

Kalkan, a member of the PKK’s executive committee, also highlighted allegations of mistreatment in Turkish prisons, according to the Erbil-based Rudaw news website.

There was no immediate claim of responsibility for the Bursa bombing. Turkish officials declared it a terror incident but did not initially blame the PKK. “The first data shows us that this attack was a terrorist attack,” Justice Minister Bekir Bozdag said from the scene.

However, the PKK has a long history of targeting state officials, from police and soldiers to teachers and forestry workers.

If the PKK was behind the bombing it would be its first in a major city since January 2017, when a bomb and gun attack on a courthouse in the Aegean city of Izmir killed a police officer and court worker.

The previous year, the Kurdistan Freedom Falcons (TAK) waged a bombing campaign across the country that killed or wounded hundreds of civilians and members of the security forces. While the PKK claims to only target the police and military, it is widely believed to use TAK as a front to carry out attacks in cities where there is a high risk of civilian casualties, avoiding further international condemnation.

Berkay Mandiraci, a Turkey-based analyst at the International Crisis Group, said it was too early to name those responsible. “But the attack seems to follow some similar patterns we saw in previous attacks claimed by the PKK or TAK.”

He added that there are Islamic State group fighters who “constitute different degrees of threat [and] who may be responsible … but the PKK seems more likely.”

Security commentator Abdullah Agar told OdaTV that Kalkan’s message was for PKK supporters who had “lost their resilience and faith” in the organization. He pointed to last week’s arrest of a PKK suspect in Kocaeli, a province that lies between Istanbul and Bursa, for reportedly preparing an attack. According to the Interior Ministry, the suspect had been planning to attack public buses.

“The type of action [in Bursa] points to structures that act on the PKK’s axis,” Agar said. “It could be the YPS structure of the PKK that carried out the terrorist act. The actions in Kocaeli and Bursa are very much in line with one another.” The YPS, or Civil Protection Units, are a militant youth branch of the PKK focused on urban fighting.

In recent years, the conflict between the Turkish state and the PKK, which seeks greater autonomy for Kurdish communities in Turkey, Iraq, Syria and Iran, has been largely restricted to northern Iraq and northeast Syria.

The war in Syria saw the PKK’s affiliate, the Democratic Union Party (PYD), ally with the United States to root out the Islamic State group, leaving the PYD in control of a swath of Syrian territory bordering Turkey and Iraq.

Despite the relocation of the conflict outside Turkey, the 38-year conflict continues to rack up bodies as Turkish troops, artillery and airstrikes target the PKK in Iraq and Syria. According to the International Crisis Group, more than 5,850 people have been killed since the end of a two-and-a-half-year cease-fire in 2015.

“The use of Turkish armed drones has been a game-changer which enabled the Turkish military to more frequently target higher-ranking PKK members and penetrate into new areas,” Mandiraci told Al-Monitor.

He added, “The PKK’s tactic to escalate within Turkey could be a response to the Turkish drawdown against the group in northern Iraq and northern Syria. But besides generating new bouts of escalation, more attacks are unlikely to lead anywhere.

“We will see if, in response, Turkey will widen its operations in northern Iraq or northern Syria against the PKK or its affiliates.”