Ankara Summit on Syria : “A Win For Moscow And Al-Assad”? 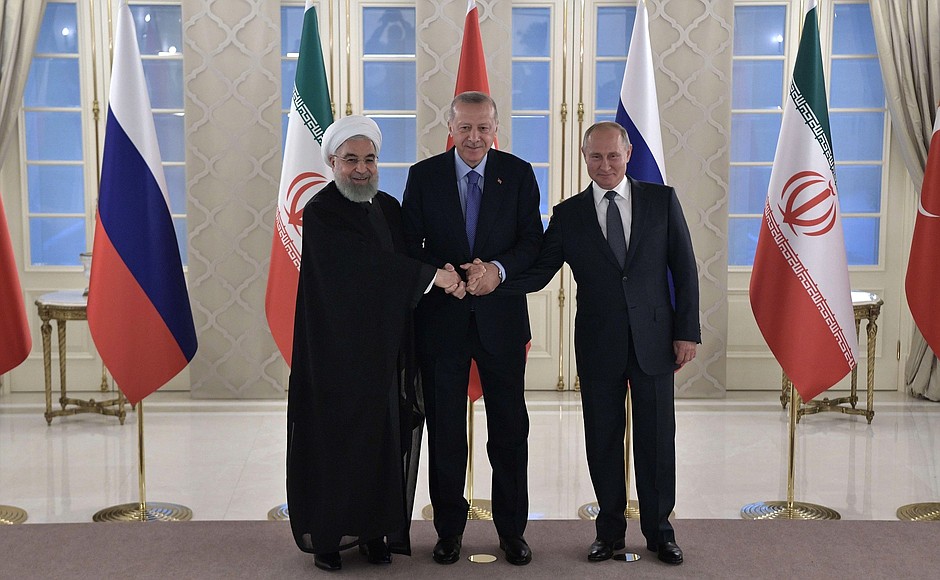 The leaders of Turkey, Russia and Iran have announced the formation of a committee to draft a new Syrian constitution as the first step in a political solution to Syria’s eight-year conflict.

Turkish President Recep Tayyip Erdogan on Monday hosted his Russian and Iranian counterparts, Vladimir Putin and Hassan Rouhani, for the fifth such summit since the trio launched the Astana talks nearly three years ago.

The meeting in Ankara was billed as a chance to focus on Idlib, the final rebel stronghold where an offensive by Syrian government forces, backed by Russian airpower, has killed hundreds of civilians and threatened Turkey with a fresh exodus of refugees.

Speaking at a news conference after a day of talks, the three leaders revealed the formation of a constitutional committee comprising government, opposition and civil society members.

Erdogan, who has backed various opposition groups during the war while Iran and Russia have supported President Bashar al-Assad, said that further initiatives would become apparent “in the following days”.

Meanwhile, Putin said: “We believe the work of the constitutional committee will be decisive in finally normalising the situation in the Syrian Arab Republic.”

‘A win for Moscow and Assad’

“It’s clearly a two-to-one majority and writing a constitution essentially does two things – it internationally democratises the regime and also legitimises it,” he said. “I think Moscow is right on target and it’s a win for Moscow and [al-]Assad.”

Kamal Alam, a London-based military analyst specialising in Syria and Turkey, said the creation of a constitutional committee “doesn’t change anything on the ground”.

Erdogan hosts Putin and Rouhani for new round of Syria talks (6:10)

“Out of the three countries, Russia is the loud and clear winner here. Iran is a pariah at the moment while Turkey is stuck in the middle of Europe, America and Russia,” Alam said.

“Russia is in the driving seat and that means al-Assad and the Syrian government are in a better position.”

Yahya al-Aridi, spokesman for the Syrian Negotiation Commission –  the main political opposition bloc – said all parties involved in the long-running conflict view the constitutional committee as the “gate” through which a political solution can be achieved.

While the committee for the al-Assad government and ally Russia is considered “the crowning of their military efforts”, al-Aridi noted that for the opposition, it is the first step towards implementing United Nations Security Council resolutions that safeguard the rights of Syrians.

“It is the only game in town,” he said of the committee.  “It will not grant the opposition or Syrians full rights … but at least it puts Syria back on track on issues related to freedom and democracy,” Aridi added.

The Ankara summit, part of a process aimed at paving the way for elections in Syria, heard Erdogan condemn the loss of civilian life in Idlib, where, according to the UN, more than 1,000 civilians have been killed since al-Assad’s forces started attacking the northwestern province in late April.

Putin and Rouhani highlighted the presence of “terrorists” such as Hay’et Tahrir al-Sham (HTS), formerly affiliated to al-Qaeda, as a reason for carrying out military operations.

Despite a ceasefire agreed to at the end of August, there have been reports of artillery attacks and air raids by government forces in recent days.

Caught up in the violence are approximately three million civilians living in the region. Tens of thousands are now gathered near the Turkish border as they try to escape fighting to the south.

Turkey, which already hosts 3.6 million Syrians, fears further fighting could create a fresh wave of refugees as well as an influx of fighters.

Ankara is also concerned about the threat to its troops based at 12 observation posts set up around Idlib as well as the enclave of Syrian Kurdish-controlled territory along its border.

Turkey has agreed, along with the United States, to set up a corridor along the border with the northeastern area under the sway of the Kurdish-dominated Syrian Democratic Forces (SDF).

Ankara considers the SDF a “terrorist” group with ties to the Kurdistan Workers’ Party (PKK), which has waged a 35-year armed campaign inside Turkey.

The SDF, however, has the backing of the US after leading the ground war against the Islamic State of Iraq and the Levant (ISIL or ISIS) armed group.

Turkey hopes to return Syrian refugees to the northeastern area, which it wants to extend 30 kilometres (19 miles) into Syrian territory.

Rouhani and Putin stressed the need to combat “terrorism” in Idlib and in other parts of Syria, suggesting alignment with Ankara’s view of the SDF.

“It’s not a good day to be an SDF member,” said Selim Sazak, a researcher at Brown University’s Watson Institute for International and Public Affairs in the US.

He added that Erdogan’s warning that Turkey would act unilaterally against the SDF if the US did not accept its demands in Syria’s northeast within two weeks indicated it had Russian backing.

“It leaves Turkey, Assad, Russia and Iran to have a four-power resolution in Syria,” Sazak said. “Turkey, by giving the US a two-week deadline is turning up the heat and if the Americans drag their feet, they’ll go with Russia.”

Russia and Turkey have strengthened their defence and energy ties in recent years, with Putin and Erdogan meeting several times so far this year.

The leaders also suggested the Astana talks could now be used as a template for other conflicts in the region, such as Yemen.

“This gives the opportunity for Russia to make itself an important power and conflict resolution agent in a region in which the US has failed,” Evin added.

Meanwhile, Sazak suggested the summit could herald further breakthroughs across the region.

“If we squint our eyes we might be seeing a grand bargain appearing in the Middle East,” he said. “It could solve everyone’s problems – not making everyone happy but giving something people can live with.”