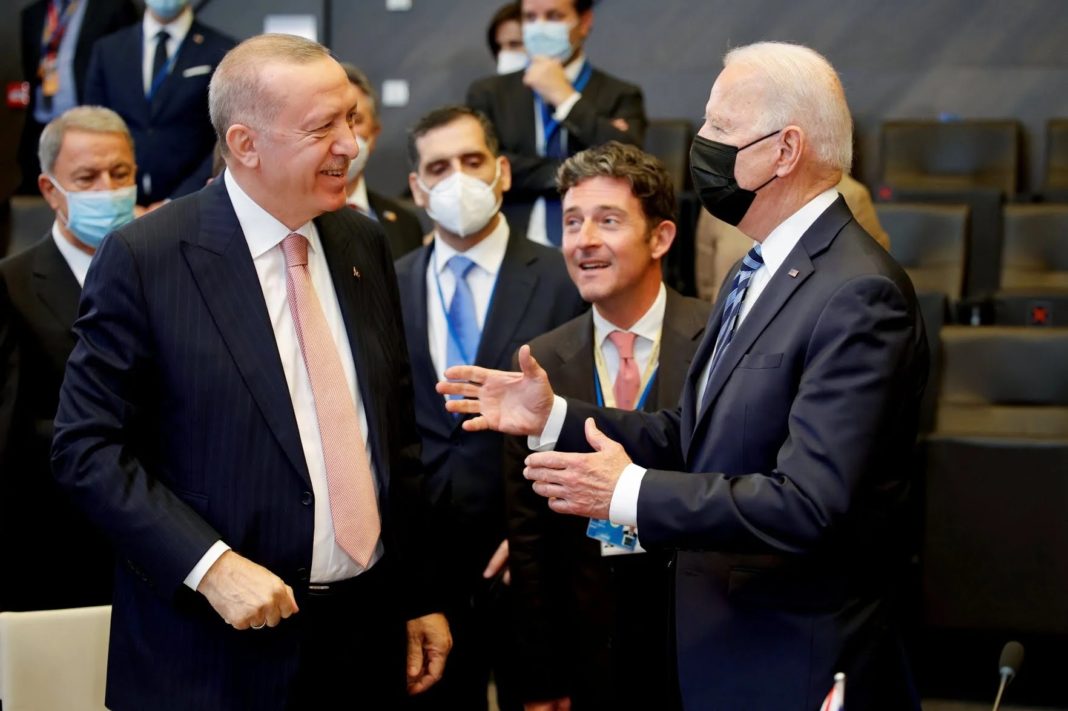 With Trump gone and Turkey’s economy in crisis, the country’s strongman president is now trying to placate Western leaders rather than antagonize them. But how far can he be pushed?

For the last four years, President Recep Tayyip Erdogan of Turkey has brazenly crushed his opponents at home and cozied up to Moscow, while showering his allies with sweetheart government contracts and deploying troops regionally wherever he saw fit.

And for the most part, the Trump administration turned a blind eye.

But as Mr. Erdogan arrives in Brussels for a critical NATO meeting on Monday, he is facing a decidedly more skeptical Biden administration, as are other strongmen leaders previously enabled by President Donald J. Trump.

President Vladimir V. Putin of Russia, who meets with President Biden on Wednesday, has responded to the new order by growing even more belligerent, openly suppressing any signs of domestic political opposition and threatening Western security by massing troops on Ukraine’s border.

But for Mr. Erdogan, things aren’t that simple. Thanks to both the coronavirus pandemic and his mismanagement of the economy, he is now facing severe domestic strains, with soaring inflation and unemployment, and a dangerously weakened lira that could set off a debt crisis.

So he has dialed back his approach, already softening his positions on several issues in the hope of receiving badly needed investment from the West — something Russia cannot provide. To reassure Western leaders, he has called off gas exploration in the eastern Mediterranean, an activity that infuriated NATO allies, and annoyed Moscow by supporting Ukraine against Russia’s threats and selling Turkish-made drones to Poland.

Yet Mr. Erdogan does have some important cards to play. Turkey’s presence in NATO, its role as a way station for millions of refugees, and its military presence in Afghanistan have given him real leverage with the West.

So Mr. Erdogan is unlikely to reverse his drift toward authoritarianism, his deepening relationship with Mr. Putin and his purchase of the sophisticated Russian S-400 air defense system, even if that means clashing with Mr. Biden’s vision for a strengthened alliance of democracies.

One question is just how far Mr. Erdogan can be pushed in Mr. Biden’s direction before he grows frustrated and casts his lot with the Kremlin or even China, although having been let down by both countries over vaccine supplies, Mr. Erdogan is cleareyed enough to keep his options open.

“How do you not lose Turkey while you try to curb Erdogan?” said Nigar Goksel, Turkey project director for the International Crisis Group.

As with Mr. Putin, Mr. Biden’s initial approach to Mr. Erdogan had been to maintain his distance, trying to avoid disagreements and handle matters at lower diplomatic levels.

Since assuming the presidency, Mr. Biden has spoken with Mr. Erdogan only once. That was to inform him that the United States was recognizing the massacre of Armenians in the last days of the Ottoman Empire as a genocide. While that was a humiliation for Mr. Erdogan that might have evoked a tantrum in previous years, it was met with a muted reaction along with the promise of a meeting at the NATO summit.

Mr. Erdogan has felt the coolness from the Biden administration, Ms. Goksel said. “Erdogan is trying to find a way forward when they are trying to make sure he does not score political points.”

Ankara badly wants to lift the country out of an economic crunch, deepened by the pandemic, which has destroyed Turkey’s vital tourist industry. It is also anxious to avoid further U.S. sanctions, imposed after Mr. Erdogan bought the S-400 missile system from Russia.

The economic troubles have taken a toll on Mr. Erdogan’s political standing. While elections are still two years away, his opponents have considerable momentum, said Ozgur Unluhisarcikli, Ankara director of the German Marshall Fund of the United States. Turks will vote according to the state of the economy, he said, and for that reason alone, he needs the meeting with Mr. Biden.

Mr. Erdogan assured American business executives during a virtual round-table discussion last month that the meeting with Mr. Biden would “herald a new era,” adding: “We have serious potential for cooperation with the U.S.A. in a wide range from Syria to Libya, from the fight against terrorism to energy, from trade to investments.”

The two leaders’ personal relationship goes back many years — Mr. Biden visited Mr. Erdogan at his home in 2011, when he was recovering from a medical procedure — yet they remain far apart on a range of issues.

The thorniest of half a dozen disputes between the two countries is undoubtedly Mr. Erdogan’s refusal to walk back his purchase of the S-400s, which has made Turkey the only NATO country to be on the receiving end of U.S. sanctions and removed from the F-35 fighter aircraft program.

Mr. Erdogan has even negotiated to purchase a second battery from Russia, but with the threat of further sanctions he appears ready to shelve that deal.

At the heart of Mr. Erdogan’s purchase of the S-400 is his distrust of Washington, which he thinks is intent on seeing him replaced. That belief was only reinforced when Mr. Biden said last year, during the 2020 presidential campaign, that the United States should support the opposition in Turkey.

But there are worries that if pressed too hard, Mr. Erdogan, who badly needs a fifth-generation fighter plane, might even buy Russian Sukhois. There is also concern about some 50 American nuclear bombs stored at Turkey’s Incirlik air base, which is under joint Turkish-American control; Mr. Erdogan has at various times threatened to evict the Americans.

Washington has been preparing to work around the disagreement over the S-400s, focusing instead on the strategic areas where the two countries can agree, namely Afghanistan, where Turkey has participated in the mission since 2001, and Iraq and Libya.

Turkey for its own reasons wants to retain a presence in Afghanistan, where it has a long affiliation, and a shared history and religion. That is a central reason the U.S. special envoy, Zalmay Khalilzad, asked Mr. Erdogan to consider maintaining a military presence there when Mr. Khalilzad began negotiations with the Taliban over a U.S. withdrawal.

But as the deadline for that withdrawal looms as early as next month, Mr. Erdogan has delayed making a commitment, creating anxiety in European capitals about maintaining safe access to the Kabul airport for their embassies.

Turkey would stay in Afghanistan if it were provided with political, financial and logistic support by its allies, Defense Minister Hulusi Akar said earlier this month. The Taliban have given Mr. Erdogan further leverage by announcing that Turkish troops should leave Afghanistan along with the rest of the NATO force.

Libya, where Turkey’s military intervention last summer angered many, is another area of possible agreement. Turkey successfully stalled a Russian-backed assault on the capital, Tripoli, throwing a lifeline to the United Nations-backed government there and offering a chance for a negotiated settlement to the war.

In other areas, they will be talking past each other. U.S. policy backing Kurdish forces in Syria is not expected to change despite bitter complaints from Turkey, and Mr. Erdogan has shown no signs of easing up on human rights.

“Biden knows he may have to choose between Turkey and democracy,” said Soner Cagaptay, director of the Turkish Research Program at the Washington Institute for Near East Policy.