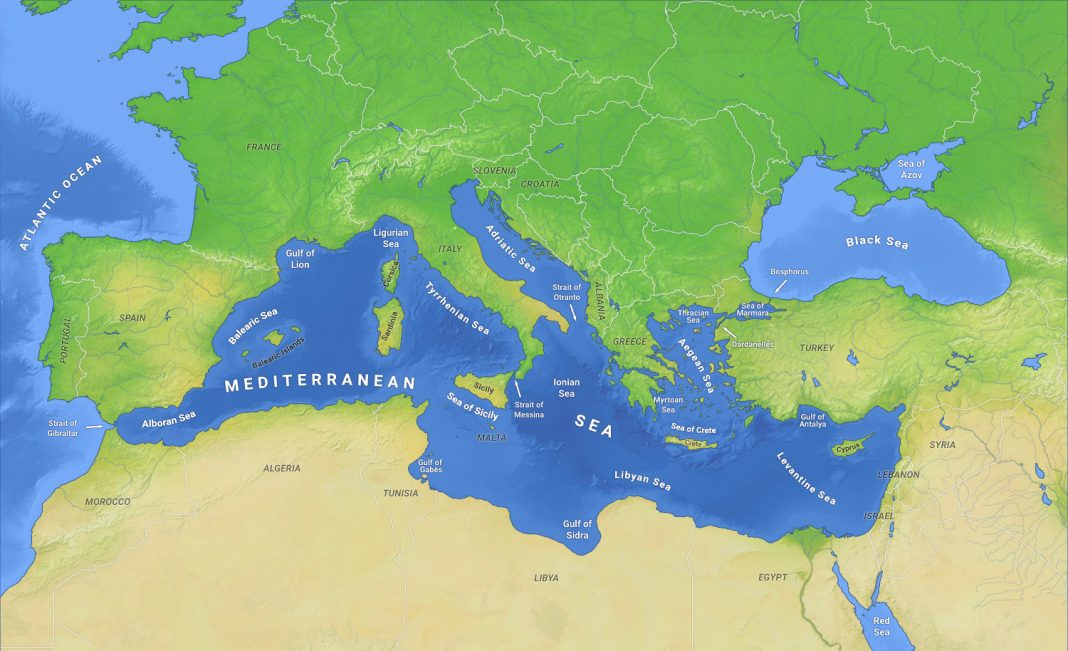 In the middle of the tensions around the issues of maritime borders and gas exploration rights, Egypt, Greece and Cyprus are preparing to conduct joint military exercises off the coast of Egypt in the Mediterranean Sea. Mohamed Saied’s article published on November 30 at Al-Monitor, analysis this situation in its historical context. You can read his article below.

Egypt, Greece and Cyprus are preparing to conduct joint military exercises off the coast of Egypt in the Mediterranean Sea amid mounting tensions with Turkey over maritime borders and gas exploration rights.

The naval and air drills are the latest in a series of military exercises dubbed “Medusa-10” and will be conducted in the first week of December. Such exercises have been held twice a year for years between Egypt, Greece and Cyprus in their exclusive economic zones in the Mediterranean with the participation of units from the navy, air force and special operations forces from the three countries.

The exercises come a full year after the last Medusa-9 round, held on the island of Crete in November 2019. This year’s drills were scheduled for the summer but postponed due to the coronavirus pandemic.

Greek press reports indicated that France and the United Arab Emirates might take part in this year’s maneuvers for the first time. It would not come as a surprise in light of the two countries’ anti-Turkish stances in the eastern Mediterranean. In May, Egypt, the UAE, Cyprus, Greece and France issued a joint statement denouncing the Turkish moves in the eastern Mediterranean as provocative and illegal.

On Nov. 21, Turkey announced the extension until Nov. 29 of its vessel Oruc Reis’ exploration activities in an eastern Mediterranean area disputed with Greece, a step expected to increase tension in the region.

Turkey and Greece, both members of NATO, are in a dispute over overlapping claims of oil and gas resources in the eastern Mediterranean. In August, Turkey sent the Oruc Reis to waters claimed by Greece and Cyprus.

These Turkish exploration operations — which Ankara claims are located in its exclusive economic zones — came in the wake of an agreement between Egypt and Greece on Aug. 6. Ankara was angered by the agreement, which effectively nullified a maritime deal that demarcated the maritime borders between Turkey and the internationally recognized Libyan government in November 2019. Greece considers the Turkish-Libyan maritime deal an infringement upon its continental shelf off the island of Crete.

On Oct. 21, the leaders of the three countries held a summit in Nicosia, where they announced they had agreed to confront provocative and escalatory policies in the eastern Mediterranean region, in a clear reference to Turkey.

In a joint press conference with Greek Prime Minister Kyriakos Mitsotakis during his Nov. 11 visit to Athens, Sisi said that Egypt stands by Greece against any provocations in the eastern Mediterranean or about its maritime borders.

Erol Kaymak, a professor of political science and international relations at the Eastern Mediterranean University in Northern Cyprus, told Al-Monitor, “The trilateral exercises are not unprecedented. Medusa-9 was held in November 2019 including Egypt, Greece and Cyprus. I consider the political stakes higher in 2020.”

Kaymak believes that this year’s maneuvers have new importance, saying, “The December maneuvers coincide with a European Council meeting featuring potential sanctions against Turkey. In other words, any military exercises would occur against the backdrop of an unfolding diplomatic crisis.

“Both Turkey and Greece agree that talks and dialogue are essential for resolving differences regarding contested maritime boundaries, but Greece will insist on conditionality [i.e. cessation of operations in the eastern Mediterranean]. Turkey will not make any overt commitments that prejudice its stance regarding maritime boundaries and its interpretation of rights emanating from the continental shelf, so it is likely that the EU summit will proceed without such commitments,” Kaymak added.

Greece accused Turkey of escalating its illegal activities in the eastern Mediterranean in violation of international law by achieving a fait accompli at the expense of EU member states, Greek Foreign Minister Nikos Dendias tweeted Nov. 24.

Turkish Foreign Ministry spokesperson Hami Aksoy called on Greece to stop using a threatening tone against his country. He said Nov. 25 in response to Dendias, “Greece should by now comprehend that a language of threats and trying to secure EU backing will not yield any results.”

Athens is calling on Turkey to end its drilling operations in the eastern Mediterranean as a condition for beginning dialogue. Ankara rejects the demand.

The European Parliament is considering a draft resolution calling on a European summit scheduled for December to impose sanctions on Turkey in reaction to its moves in Cyprus and its territorial waters.

On Nov. 15, Turkish President Recep Erdogan paid a controversial visit to Varosha, a beach town in Northern Cyprus. During his visit, Erdogan called for the settlement of the conflict in Cyprus on the basis of two separate countries. Angered, the EU called Nov. 16 for Ankara to act responsibly.

Cyprus has been divided since the Turkish invasion of the island in 1974 in response to a Greek military coup. Turkey is the only country that recognizes Northern Cyprus as an independent country and it does not have diplomatic relations with the government of Cyprus, a member of the European Union.

Koert Debeuf, the editor-in-chief of the EUobserver and a former adviser to the Belgian prime minister, expects the upcoming European summit to produce sanctions on Turkey. He told Al-Monitor, “Germany, [which holds the] EU’s current presidency, asked for more time for diplomacy during [the] last summit. Now, three months later, things actually got worse, with Turkey pushing to open the resort of Varosha on Cyprus. Also, Turkey just continues with drilling, [and] keeps on arming the Libyan government.”

Debeuf said, “Nobody wants an escalation. The EU wants Turkey on the negotiation table. Turkey and the EU are too dependent on each other economically, politically and on the level of migration.”

“IRINI is following a UN embargo on arming Libya. The fact that a Turkish cargo ship refuses to cooperate with a German ship has and is still worsening the relationship, especially with Germany that did everything to give Turkey and diplomacy a chance,” Debeuf added.

Kaymak said, “I doubt Erdogan will back off. [Turkey] will agree to bilateral talks with Greece if it can agree through the EU. It cannot negotiate with Cyprus [since it doesn’t recognize it]. But any negotiation could prove protracted and inconclusive, so any modus vivendi could be short-lived in 2021.”

Mohamed Saied is an Egyptian journalist who studied media at Cairo University. He has worked as a field reporter for several local websites and newspapers as well as as a news department head at Masrawy and news producer at ONTV. He has covered several major events in Egypt, most notably those that followed the protests of Jan. 25, 2011, and June 30, 2013. His coverage focuses on political and economic issues with a deeper look at Egypt’s foreign relations in the Middle East. On Twitter: @MohamedSaiedF

Ahval, May 3, 2021, Yavuz Baydar Turkey today is an inferno with respect to the freedom, independence and plurality of the media. The country has become...
Read more
Share This