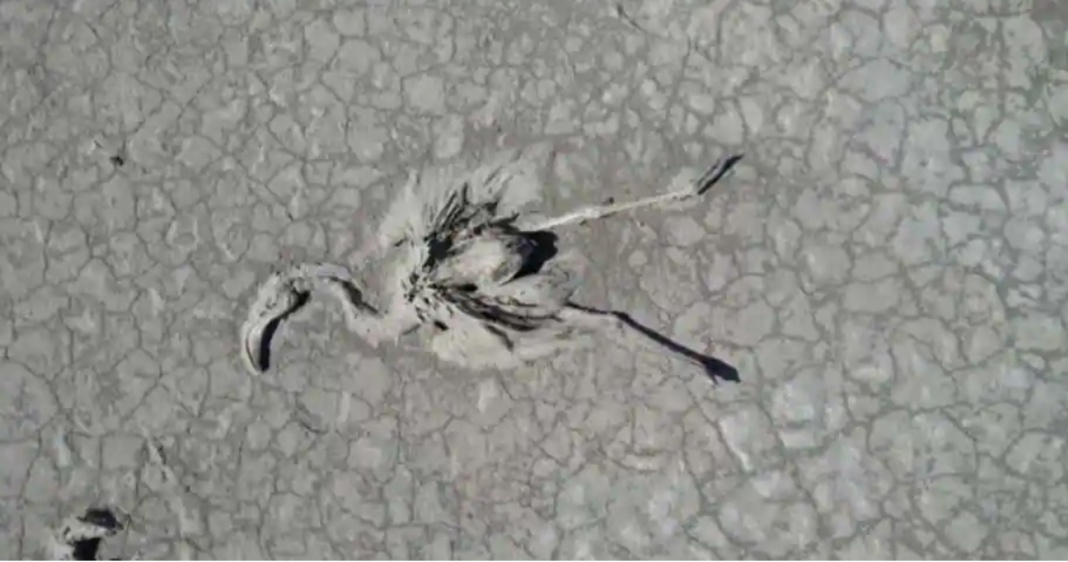 f we stood in this spot a few years ago, the water would be up to your armpits,” says vet Isa Agit, standing on sun-hardened and cracked mud that used to be part of a lake in eastern Turkey, with his hands firmly wrapped around a long-legged buzzard. “That’s the last of the flamingos over there,” he adds, pointing to what is left of the lake in the village of Enginsu – a patch of water just visible in the distance.

Over the past 50 years, 60% of Turkey’s 300 natural lakes have dried up and the loss is devastating for birds and other wildlife. Reduced rainfall, rising temperatures, the mismanagement of public land and poor agricultural practices have caused water levels, even in the Middle East’s second largest lake, Lake Van, to recede by as much as 200 metres.

Migratory birds have been particularly affected by the change – between 3,000 and 5,000 young flamingos died of starvation in July after the waters of Lake Tuz, in central Anatolia’s Konya basin, receded too far for them to reach the shore from their nests. The impact on ecosystems has also caused mass gull deaths and birds of prey are falling sick from infections caused by changes to their diet.

Agit, who works at Yüzüncü Yıl University’s Wild Animal Protection and Rehabilitation Centre in the city of Van, said this year’s fish migration lasted two and a half months – half its usual length – because of the lack of rain. As a result, gulls and other birds have turned to eating unnatural foods such as rubbish and dead animals, which can ultimately kill them due to parasites.

“Birds don’t have enough food, so some are attacking each other,” says Agit. “Hawks and eagles don’t usually eat crows, but now they do and sometimes they carry diseases of ticks, which might be lethal.”

He is preparing to release the long-legged buzzard, whose wing was wounded in a fight with other birds over food – it couldn’t hunt and was starving before being brought to Agit at the rehabilitation centre.

Now fit and healthy, Agit holds the bird in the air before letting go. It soars off towards the last patch of lake, flying over dry ground strewn with bird bones. “Two years ago, this mud was not here and it was all wet,” says Agit.

Prof Loğman Aslan, director of the centre, says that stress was also a factor in the bird deaths. The drop in food sources and changes to the natural environment were stressing the animals and making them more susceptible to parasites. Other experts have blamed emissions from coal power plants as a contributing factor – Turkey is among the main contributors to Europe’s air pollution levels.

It used to be very beautiful here and everywhere was grass. Now it doesn’t grow

According to the UN, Turkey is highly vulnerable to the effects of the climate crisis. This year, the Sea of Marmara has experienced an explosion of “sea snot”, or phytoplankton, caused by rising temperatures, and the largest forest fires in living memory ravaged the country’s south coast. In July, the eastern city of Cizre recorded the country’s highest ever temperature at 49.1C.Advertisementhttps://5b7636e594713647aed6822ec9e34c17.safeframe.googlesyndication.com/safeframe/1-0-38/html/container.html

Many think of Turkey as Europe’s rubbish dump, as plastic waste is exported there for recycling, but much of it ends up illegally dumped, burned or left to pollute the seas.

Another lake in eastern Turkey, Lake Akgol, completely dried up this year. Shepherds in the area said that, although drought has been a problem in the region for the past 10 years, this year has been the worst, as there was little snow in the winter due to warmer temperatures, and therefore little meltwater.

“It used to be very beautiful here and everywhere was grass. Now it doesn’t grow,” says Yakub, 20, a farmer from a village close to Akgol, which is now a greenish patch of parched earth.

“It just happened this year and it was really fast. We used to swim here at this time of year. There were a lot of ducks and pelicans, but now there’s almost nothing.”

Aside from drought and rising temperatures, one of the biggest challenges facing Turkey’s water supplies is that, with the ground so dry, farmers are rerouting water sources for their land and animals. Groundwater supplies are becoming depleted as a result, and little is being done to address the issue.

Poor agricultural practices, along with the use of lake water for large construction projects, and pollution, mean that wetlands are drying out – and they are a key habitat for migratory birds that come to Turkey from central and north Africa each spring to breed.

According to Turkey’s Doğa Derneği, a group of conservation volunteers, almost half of Turkey’s wetlands have been irreversibly lost over the past 70 years. It says that currently there are water management plans in place for only 24 of the 76 registered wetlands.

Safak Arslan, a bird of prey specialist with the group, says poor practices and a lack of government policy are destroying the land, and that needs to change. According to Arslan, only a return to traditional Anatolian farming methods, using irrigation terraces and planting indigenous crops such as oregano and lavender, which require little water, can help save the landscape, and therefore the birds.

“Experts are telling us that there will be more unseasonable rains and droughts, yet we haven’t taken any precautions against them so far,” he says. “We are a water-poor country. We need to take action before the fire breaks out, before the forests disappear and before the wetlands dry up.”