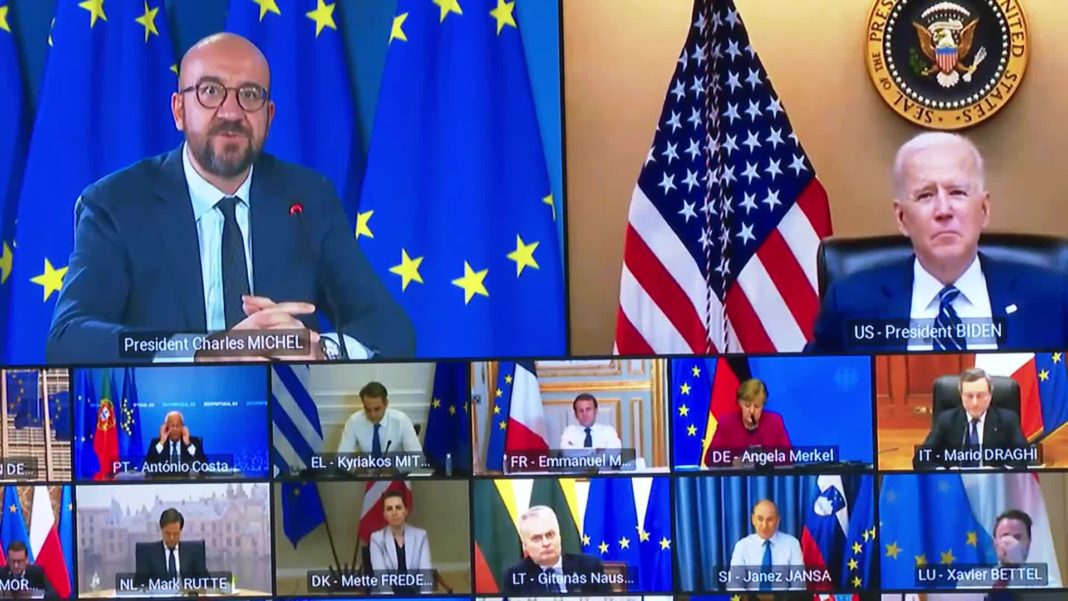 Following the video conference on March 25, 2021, the members of the European Council have adopted a statement calling on Turkey “to abstain from renewed provocations or unilateral actions in breach of international law.”

Following the informal video conference yesterday (March 25, 2021), the members of the European Council have adopted a statement on the novel coronavirus (COVID-19), single market, industrial policy, digital and the economy, the Eastern Mediterranean and Russia.

Noting that the members of the Europan Council held a discussion on the situation in the Eastern Mediterranean and on the European Union’s (EU) relations with Turkey, the statement has welcomed the the Joint Communication on the « State of play of EU-Turkey political, economic and trade relations » prepared by the High Representative and the Commission as requested by the European Council in December 2020.

Welcoming the recent de-escalation in the Eastern Mediterranean, the statement of the members have underlined that the « rule of law and fundamental rights in Turkey remain a key concern » for the EU.

The statement says the following about Turkey:

« We recall the European Union’s strategic interest in a stable and secure environment in the Eastern Mediterranean and in the development of a cooperative and mutually beneficial relationship with Turkey.

« We welcome the recent de-escalation in the Eastern Mediterranean through the discontinuation of illegal drilling activities, the resumption of bilateral talks between Greece and Turkey and the forthcoming talks on the Cyprus problem under the auspices of the United Nations.

« Provided that the current de-escalation is sustained and that Turkey engages constructively, and subject to the established conditionalities set out in previous European Council conclusions, in order to further strengthen the recent more positive dynamic, the European Union is ready to engage with Turkey in a phased, proportionate and reversible manner to enhance cooperation in a number of areas of common interest and take further decisions at the European Council meeting in June:

a) on economic cooperation, we invite the Commission to intensify talks with Turkey to address current difficulties in the implementation of the Customs Union, ensuring its effective application to all Member States, and invite in parallel the Council to work on a mandate for the modernisation of the Customs Union. Such a mandate may be adopted by the Council subject to additional guidance by the European Council;

b) we are prepared to launch high level dialogues with Turkey on issues of mutual concern, such as public health, climate and counter-terrorism as well as regional issues;

c) we invite the Commission to explore how to strengthen cooperation with Turkey on people to people contacts and mobility.

« We call on Turkey to abstain from renewed provocations or unilateral actions in breach of international law.

« Taking into account the Joint Communication, we reaffirm the determination of the European Union, in case of such action, to use the instruments and options at its disposal to defend its interests and those of its Member States as well as to uphold regional stability.

« We appreciate Turkey’s hosting of around 4 million Syrian refugees and agree that the assistance of the European Union for the refugees and host communities be continued. We invite the Commission to present a proposal to the Council for the continuation of financing for Syrian refugees in Turkey, as well as in Jordan, Lebanon and other parts of the region.

« On migration management, within the framework of the broader EU strategy encompassing all migratory routes, cooperation with Turkey should be strengthened, notably in areas such as border protection, combating illegal migration, as well as the return of irregular migrants and rejected asylum seekers to Turkey, in accordance with the EU-Turkey Statement, applied in a non-discriminatory manner.

Rule of law and fundamental rights

« Rule of law and fundamental rights remain a key concern. The targeting of political parties and media and other recent decisions represent major setbacks for human rights and run counter to Turkey’s obligations to respect democracy, the rule of law and women’s rights. Dialogue on such issues remains an integral part of the EU-Turkey relationship.

« We recall the previous European Council conclusions and remain fully committed to a comprehensive settlement of the Cyprus problem in accordance with the relevant UNSC resolutions (notably 550, 789, 1251).

« We look forward to the resumption of negotiations under the auspices of the United Nations in which the European Union will participate as an observer, and will play an active role in supporting the negotiations, including by appointing a representative to the UN Good Offices Mission. » (EKN/SD)