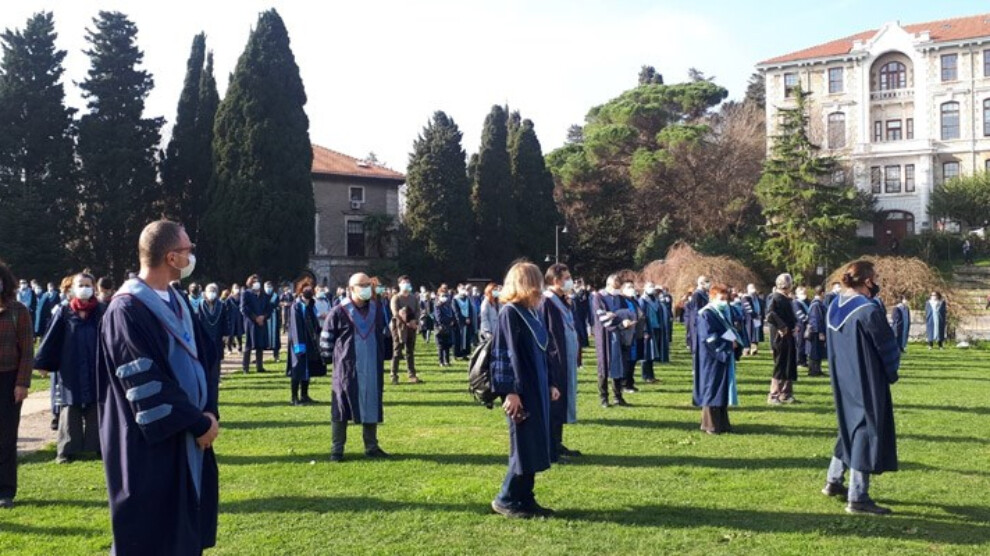 For the past 14 months, Turkey’s top-ranking Bogazici University has been under politically motivated attacks by government circles, which threatens its very existence as the last autonomous and free public university in the country. On January 1, 2021, President Erdogan appointed Melih Bulu, who was unqualified for the job and a member of the ruling party, AKP, as Rector (Vice Chancellor) to the university without consulting faculty members. This triggered resistance among academics and students, followed by relentless attacks undermining Bogazici University’s governing bodies, administrative committees, student clubs and societies. Two new faculties were founded overnight and political appointments were made to key offices to sway votes in the Senate and other governing bodies of the university.

From day one, students, faculty members and alumni staged protests and a tug-of-war ensued between them and the appointed rector and his accomplices. The police were called on campus in early 2021 to crush student protests and hold the campus under siege for several months. Hundreds of students were taken into custody, some were held in pre-trial detention for months. Boğaziçi faculty have held vigils every workday since 5 January 2021, turning their backs to the rector’s office in silent protest. Six faculty members were dismissed in retaliation, and protesting professors became targets of smear campaigns by the government-controlled media.

Against all odds, the resistance succeeded in exposing Bulu as a plagiarist and incompetent administrator, which led to his dismissal by Erdogan after 7 months of protests. Following his dismissal, staff, students and alumni quickly organized a vote, and announced their candidates for the rectorate. Yet, Erdogan replaced Bulu with the latter’s deputy, Naci Inci, flatly ignoring the will of the university. İnci proved to be even worse than his predecessor, purging staff in greater numbers, disciplining hundreds of students and laying baseless accusations against some that led to months-long arbitrary detentions.

The attacks got fiercer in 2022, when the Council of Higher Education dismissed three elected deans for resisting the assigned rector’s orders to dish out heavy disciplinary punishments to students and faculty members. Naci Inci first appointed himself and his deputies to their posts, but then got academics from outside Bogazici University to replace them. Thereby, Erdogan loyalists gained almost full control of university administration and obtained the authority to dismiss faculty and expel students. They lost no time in abusing these powers. The rector created a new foundation, whose members include AKP deputies, to short-circuit the existing foundation loyal to Bogazici’s academic principles. The new tactic seems to be to re-tool the campuses, perhaps move the university out of the historical site it has occupied since 1863 to some faraway suburb and allow private contractors close to Erdogan to build commercial venues in its place.

In a recent letter, Scholars at Risk called attention to how politicizing the Bogazici University administration and punishing dissent deepens the erosion of academic freedom already underway in Turkey since 2016:

On Feb. 18, 2022, the Magna Charta Universitatum Observatory, which oversees the integrity of intellectual and scientific work in 904 signatory universities in 88 countries in the world, also issued a statement condemning the violation of institutional autonomy at Bogazici University:

More than a year into the struggle, students and staff are exhausted, yet still defiant, standing firmly by the principals of academic freedom, institutional autonomy and democratic governance. These recent pieces offer a comprehensive account of the resistance:

We, the undersigned, condemn the intensifying attacks on Bogazici University, and stand in solidarity with the students, faculty, and alumni who have waged an inspiring struggle for the principles of institutional autonomy, academic freedom and democratic governance. We demand:

– the reinstitution of electoral procedures to fill major administrative positions at the university, including the position of Rector, Dean and Head of Institute,
– the reinstatement of unfairly dismissed staff,
– an end to the legal harassment of Boğaziçi staff and students,
– the lifting of all restrictions on student and academic activities,
– a return to democratic governance principles that made Bogazici a center of excellence and allowed faculty and students control over administrative decisions, academic programs, teaching, extra-curricular activities and university property.

We also urge President Erdogan to desist from his interference in administration and governance of higher education institutions in Turkey and to respect their constitutional autonomy.

CLICK HERE to add your signature. The signatures will be updated everyday at 00:00 (CET).