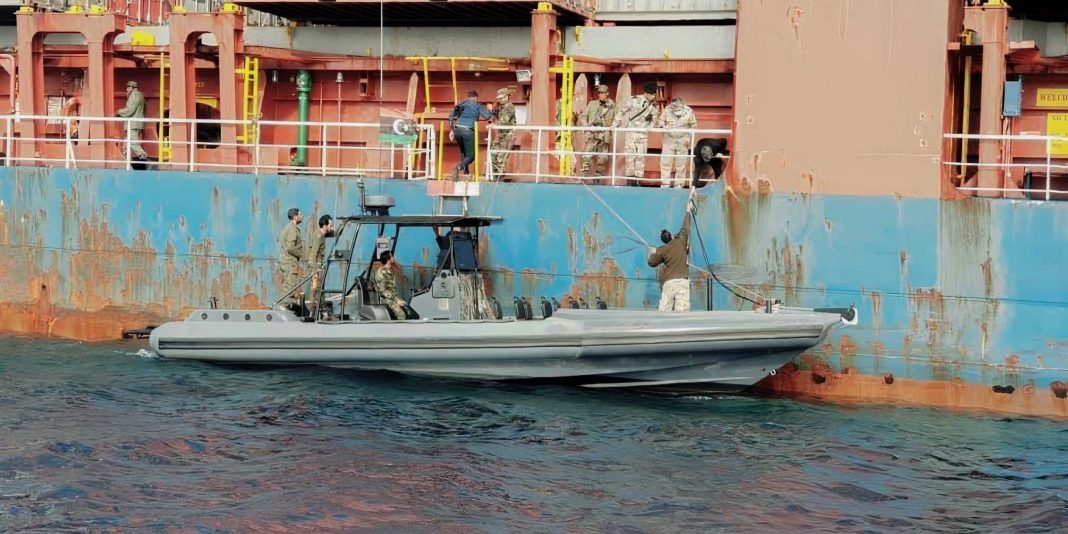 After a Turkish ship sailing under a Jamaican flag was intercepted by forces loyal to eastern Libyan leader Khalifa Hifter late Monday for reportedly entering a prohibited area near Libya’s coast, the tension between two countries increased. Diego Cupolo wrote on this issue for Al-Monitor on 8 December 2020. You can read his article below. Photo: AA Photo

The ship was en route to the western Libyan port city of Misrata controlled by the Tripoli-based and Turkey-backed Government of National Accord (GNA), which for years has been at war with Hifter’s Libyan National Army (LNA).

In late 2019, Turkey began providing military support to the GNA, helping it break an LNA siege on Tripoli this April and pushing the back front line to the central Libyan city of Sirte, where fighting has largely subsided since both sides signed a truce in October, though infringements continue.

Observers warn Tuesday’s events could destabilize the fragile cease-fire and raise tensions between the LNA and Turkey.

Though officials in Ankara did not make public statements on the incident Tuesday, an anonymous Turkish source told Reuters the ship was carrying medicine and medical products from Egypt to western Libya.

“Patients who urgently need the medicines and blood products on that ship are waiting in Libya. It is clear that there are no weapons or anything else,” the source told Reuters. “Such seizures are not right.”

LNA spokesperson Ahmed al-Mismari tweeted late Monday that the cargo vessel, named Mabruka, was being investigated for “violations of maritime laws and regulations” after it entered eastern Libya waters. Mismari said the ship’s crew did not respond to calls from the LNA navy and was subsequently intercepted and towed to the port of Ras al-Hilal.

The ship’s owner is reportedly Turkish while its 17 crew members include nine Turkish citizens, seven Indian citizens and one Azerbaijani sailor. All crew members remain in good condition, according to the Turkish state media.

Conflicting reports indicate the ship was at least partially searched. Mismari told the Libyan Alhadath television news channel, the vessel was carrying medication to Misrata, adding no weapons were found on board.

Jalel Harchaoui, a research fellow at the Clingendael Institute who focuses on Libya, said details regarding the incident remain incomplete but he does not expect the ship to be carrying illicit cargo as it had previously made a stop in Egypt, where the government backs Hifter’s LNA forces.

Do not assume “that the LNA knows everything about the various boats on the sea and intercepted this one because it knew that it was Turkish,” Harchaoui told Al-Monitor. “It had a Jamaican flag.”

Harchaoui added LNA forces have intercepted Egyptian boats in the past for “no valid reason,” saying, “Now, they need to make a decision on whether to release [the crew] or not, but it didn’t start as a political operation, I don’t think.”

In recent years, Turkish vessels have been increasingly targeted near Libya under suspicions of violating an arms embargo on the warring nation. In late November, a German naval mission under the European Union’s Operation Irini, which seeks to stop illicit weapons transfers to Libya, intercepted a Turkish cargo ship carrying paint supplies and humanitarian aid to Misrata.

Ankara requested the ship’s search be stopped before investigators could examine all cargo containers. The incident raised diplomatic tensions between Berlin and Ankara, whose Foreign Ministry accused Operation Irini of bias in patrolling Mediterranean shipping traffic.

Last year, LNA forces detained six Turkish sailors and released them in July after bowing to threats of possible escalation from Turkey’s Foreign Ministry. In September, the LNA Coast Guard also detained 18 fishermen on two Italian fishing boats and has held them in detention in an apparent attempt by Hifter to secure the release of four Libyan nationals from Italy.