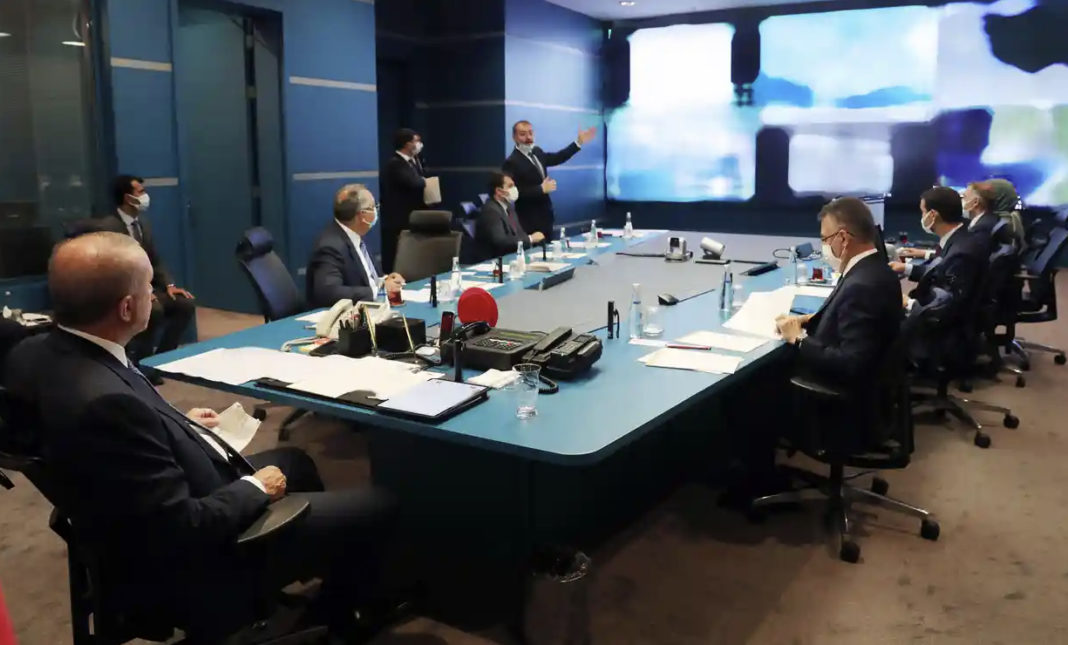 Erdoğan is ready to go anywhere from Syria, Libya, Somalia and Qatar to Karabakh and Afghanistan. His heart extends to wide regions. But this generous heart has no place for Turkey because that country in the disaster zone is unfortunate. It is like a foreign country to him.

These days, it’s difficult to hold it together. For those who have seized the country torment us with their mafia-like management, their hubris, their selfishness, their ignorance, their incompetence and indifference. Our hearts are exhausted from the constant racism and hate speech. Now, our lungs are burning. Forests are destroyed with their entire ecological system, their fauna and flora.

Turkey’s president has 13 planes for his personal use, but not a single plane to put out the forest fires. He gives random reasons as to why they scrapped the planes of the Turkish Aeronautical Association (THK), an institute whose entire assets they seized.

We, the sane people of this country, all seek refuge in the presence of three or four people to hold it together, as well as in the goodness of those who strive to put out the fires and in the immortal bravery of the firefighters battling the flames.

Italy, Greece and Turkey are in the same geographical zone. There were 299 wildfires in Italy and 58 in Greece the other day. There were 112 fires in Turkey in the past couple of days. The size of Greece’s territory is one-sixth that of Turkey. Greece has 39 firefighting aircraft and Turkey has none. This fact went in like a knife in everyone’s hearts.

But Erdoğan has a response for everything. “The essence of the problems concerning the lack of aircraft is that the THK, which has been carrying out this mission for many years, has not been able to renew its fleet,” he said.

Yet the President is able to build several presidential places burdening the public budget just for the sake of his reputation. He has one winter palace, and another separate summer palace. He also has cottage by the lake of Van in the east. There’s always a budget for that. The places and mansions that have gracefully accommodated the Ottoman sultans in Istanbul are not enough for him!

What is more, Erdoğan’s love for glamour is exported overseas. He’s been trying to build an unnecessary palace in Northern Cyprus, against the will of the Northern Cypriots.

All these disasters and fiascos are not due to a lack of resources, but because the governing elite regards the country’s riches as their trophy. On any issue, if there’s no profit involved, then this elite does not enact measure or bother making investments.

And this logic calls for deforestation, not protecting the forests. Our state is big, great and powerful when it comes to bravado. When the issue is the water, valley and forest of the villager, somehow, the state shrinks and becomes brutal.

Erdogan frequently boasts that “Turkish Airlines (THY) flies to 58 destinations in Africa.” The family business of drones and combat drones are proudly marketed from country to country. The other day, he said “We are now the third or fourth country in the world with regards to the production of drones, combat drones and attack drones.” He is drawing and building a legend of a “great state” from the military adventures in Syria, Libya and Karabakh.

The Turkish state also monitors the mountains of Iraqi Kurdistan 24/7, conducting operations with dozens of planes day and night. At one point, he said a domestically built plane would be flying in 2023. Now he is telling his subjects to hold their breaths because “We are very near to going to the moon.” Despite all this, Suleiman the Magnificent does not have one single plane to watch, protect and save his forests!

The map of global fires is disastrous. Turkey is in the fire zone just like the earthquake zone. There has been no preparation for this crisis for years, which has become increasingly serious with global warming. Instead of measures, on the contrary, all anti-environmental projects are given the green light.

They have been systematically clearing out and destroying all the institutions they associate with the founders of the republic. The reason for this hate is the abolition of the caliphate by the founders. The THK is at the top of these institutions. Instead of allocating 34 million Turkish Liras to renew the firefighting planes, they have been paying 287 million TL to the rental of Russian planes within two years.

They never stop generating conspiracy theories just to maintain this damned pattern in their political existence. Certain tools of the government are developing racial hatred against the Kurds, claiming they have started the fires. This fuels the flames in the engine of this nationalist-Islamist coalition. A theater in a madhouse! A feast for the flatterers, the gangs, the contractors, but a nightmare for the rest.

For 20 years, Erdoğan has been selling a story to the entire world: We are the leading country, a pioneer of the Islamic world, the voice of the ummah. A narrative of appropriation, spanning Kosovo and Bosnia, as well as Jerusalem, Damascus, Baghdad and Kabul. But this has no base, nobody cares except for a couple of Islamists! This fantasy that extends beyond borders has no substance. It is a discourse that is totally disconnected from reality.

The inspiration and the rhetoric that have turned the country into a refugee pool is the product of this sick mentality. The land of the caliphate is open to all, as you can imagine. However, it is free to act as if protecting the refugees but actually humiliating them; to subject them to racism, transform them into cheap labor at all times, to use them to blackmail Europe and to extort money from it. They are all open and free in the order of the caliphate. In all the regions they have taken over with their global masters, the only thing that remains is instability and irregular migration.

A network of evil was established with its arms stretching around like octopuses. It never fails to renew itself and find room for maneuver. Recently, Ankara offered to protect and manage the airport of Kabul. If this works out, Erdoğan will recruit militiamen from the Free Syrian Army, as he did in the Libyan intervention.

He will raise funds from allies to be sent to the accounts of pro-government private security companies for these militias. Meanwhile, he will broker a refugee deal concerning the Afghans just like the one he did for Syrians. These immoral relations established with the United States and the EU will be the guarantee of the one-man’s survival. The Taliban reiterated that they will treat Turkey as an invader if Turkish troops stay on to protect Kabul Airport. But he has such a big appetite for the Kabul mission that he even said there was no problem between them and the Taliban in terms of religious beliefs.

For 20 years, we accompanied the American occupation under the umbrella of the International Security Assistance Force (ISAF) and the Resolute Support Mission (RSM). Now, Erdoğan can proudly say: “We stood with our Afghan brothers in the face of all these imperial forces.” Meanwhile, he is trying to make Turkey a part of the conflict with a new mission on behalf of NATO.

He is ready to go anywhere from Syria, Libya, Somalia and Qatar to Karabakh and Afghanistan. His heart extends to wide regions. But this generous heart has no place for Turkey because that country in the disaster zone is unfortunate. It is like a foreign country to him. Also, do not assume that the fantasy world attributed to other countries has real and quantifiable consequences. Turkey, for years, has been wasting its capabilities on obsessive ambitions.