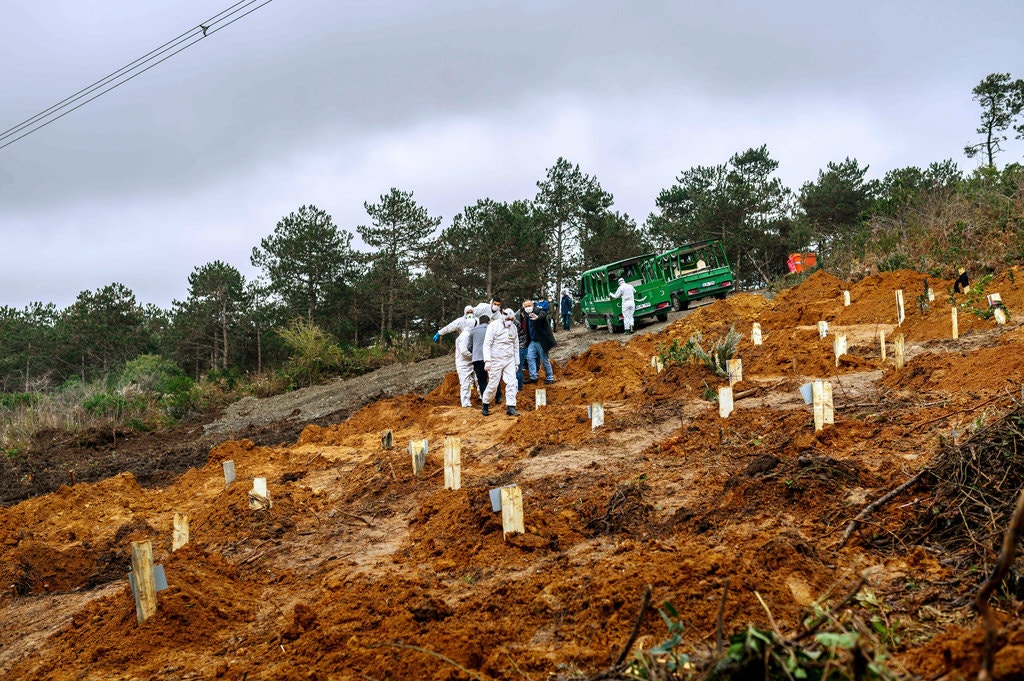 The number of COVID-19 positive cases increases  in Turkey, especially in Istanbul and Trabzon where mortality rates are higher than the previous years.

The Turkish Thoracic Society announced on 19th of April that there were significant increases in the average mortality rates in these two provinces compared to previous years, creating concerns and suspicion. According to the data obtained using death records, Trabzon overtook Istanbul in mortality rates. When the death toll of the two cities are examined, the increase in deaths is 10 percent in Istanbul and 25 percent in Trabzon. Especially the increase in the number of weekly deaths in Istanbul by 800 people was another reason of the doubts on the transparency of the official data. Turkish Thoracic Society is concerned that these increases may be related to COVID-19.

The article below, by Carlotta Gall on April 20 in New York Times, claims that Turkey is hiding a wider COVID-19 calamity based on the findings of the Times suggesting a hidden toll: the number of deaths in Istanbul recorded 2,100 more deaths over recent years between March and April.

“ISTANBUL — For weeks President Recep Tayyip Erdogan has presented Turkey’s performance in handling the coronavirus as one of the world’s most successful, as he maintained strict control over information about the outbreak.

The presidential palace rolled out a carefully orchestrated propaganda campaign, ensuring reports from hospitals, grave sites and mourning relatives remained virtually absent. Doctors who spoke out on social media were reprimanded, and 410 people were detained in March for “provocative and abusive” posts.

But data compiled by The New York Times from records of deaths in Istanbul indicate that Turkey is grappling with a far bigger calamity from the coronavirus than official figures and statements would suggest. The city recorded about 2,100 more deaths than expected from March 9 to April 12, based on weekly averages from the last two years, far more than officials reported for the whole of Turkey during that time.

While not all those deaths are necessarily directly attributable to the coronavirus, the numbers indicate a striking jump in fatalities that has coincided with the onset of the outbreak, a preliminary indicator that is being used by researchers to cut through the fog of the pandemic and assess its full toll in real time.

Even by the official count, confirmed cases in Turkey rose to more than 90,000 by Monday, lifting Turkey above China to become the seventh most affected country in the world. Deaths have reached 2,140.

The government maintains that it acted swiftly, stopping flights and border crossings from five of the most affected countries in February, and closing schools, restaurants and bars in mid-March, when the first infection was confirmed.

But by then, the statistics compiled by The Times show, the damage was done.

The government announced the country’s first death from Covid-19 on March 17. But the statistics compiled by The Times suggest that even around that time, the number of deaths overall in Istanbul was already considerably higher than historical averages, an indication that the virus had arrived several weeks earlier.

Still, Mr. Erdogan assured the nation on March 18, after the second death was announced, that Turkey had “quickly taken all precautions.”

“We, together with our people, rose to this challenge ably and decisively, as we always do in the face of attacks against our country,” he said.

Yet the actions taken by Mr. Erdogan since early February have revealed his priorities. He has repeatedly tried to reassure the population, describing how he eats a spoonful of mulberry molasses every morning to boost the blood. And, in an effort to keep at least part of the economy functioning, he has avoided ordering a complete nationwide lockdown.

An economic collapse would spell disaster for his presidency. His popularity had been sliding amid a faltering economy and high unemployment, even before the pandemic.

Instead, Mr. Erdogan has introduced gradual measures to encourage social distancing, restricted domestic travel, and ordered a curfew for those over 65 and under 20 years old.

Yet the infections have spread, ballooning in Istanbul and Izmir, big cities with international business and tourism connections, as well as in central cities where 6,000 pilgrims returning from Saudi Arabia did not always follow self-isolation rules.

The government has said the high case count is because of its widespread testing — there have been more than 600,000 tests. And it has also pointed out that the rate of infection is dropping.

Still, deaths in Istanbul during the five-week period between March 9 and April 12 were about 30 percent higher than historical averages, The Times has found.

In the first two weeks of April, the most recent figures available, deaths in Istanbul were about 50 percent higher than average. Increases of that magnitude are worrisome and seem clearly related to the outbreak, said Stephane Helleringer, a demographer at Johns Hopkins University.

Any death statistics in the midst of a pandemic are tricky to pin down and must be considered preliminary. Many European countries are engaged in trying to improve their death statistics, which they now acknowledge are incomplete.

The Istanbul totals may include both deaths directly linked to the coronavirus as well as those from other causes, like cancer or heart disease, that may have become more common as hospitals reached capacity and people avoided seeking medical care.

The Times’ findings were supported by Onur Altindag, an Assistant Professor of Economics at Bentley University, who has published data from 10 cities in Turkey comparing them with statistics from the previous four years.

Turkey’s Health Ministry has released only limited data on the spread of the virus and only announced numbers of Covid-19 cases in individual cities on one occasion, on April 1.

Istanbul, a city of 16 million, accounted for 60 percent of confirmed cases of Covid-19 on that day, said Dr. Fahrettin Koca, the Health Minister.

Several other cities, including Ankara and Izmir, have been declared growing hot spots. On April 10, Turkey began enforcing lockdowns on weekends in 31 metropolitan areas.

Mr. Altindag also found early signs of excess deaths in the town of Sakarya, one of the cities included in the lockdown order.

Officials like Dr. Koca have emphasized that Turkey’s health care system was vastly expanded over the last two decades under Mr. Erdogan, that patients are recovering from the virus and that Turkey will reach its peak in about a week.

But medical professionals warn that Turkey may not have a grip of the spread of the virus. “In February they did nothing although it was known the disease was there,” Dr. Sinan Adiyaman, head of the Turkish Medical Association, said in a telephone interview.

Personal protection equipment has been lacking in some places, and testing was only ramped up to a sufficient level in April, he added.

And Turkey is only counting cases of Covid-19 that have been confirmed with a positive test result. It is not including in its totals cases that have been clinically diagnosed as Covid-19 but have not been tested positive, Dr. Adiyaman said.

“The data we have is not sufficient to say if they are controlling the pandemic,” he said.

The Turkish Medical Association, an independent professional association with about 120,000 members, has called for more transparency, which would help doctors better understand the disease.

The association presented 22 questions to the minister last week, requesting data about cases, the demographics of those infected and details on the number of health care workers who have become sick. They have yet to receive answers.

Dr. Adiyaman said that the science board, a group of experts set up by the government to advise its management of the pandemic, does not make its decisions public and the government does not share data with his association.

The health minister announced that 601 health personnel had been infected with the virus by April 1. But Dr. Adiyaman said that nearly 1,500 have been infected, including 1,000 in Istanbul. Seventeen health professionals have died from the virus in Istanbul, according to reports released by several trade unions.

“From the beginning there has been a problem with personal protective equipment,” he said. “Some are worried that their P.P.E. will run out and they will not have new ones.”

“Some are working 12-hour and 24-hour shifts, and this is causing burnout,” he added.

Although the government showed a 63 percent approval rating in a recent poll for its performance tackling the coronavirus pandemic, the rush of panic buying that occurred around the country when a curfew was abruptly announced in several major cities on April 10, gave a glimpse of growing public anxiety.

Mr. Erdogan’s government is already short of cash and has depleted reserves shoring up the Turkish lira over the last year. With businesses closing and one of Turkey’s main income earners, tourism, halted, the government has several times had to announce additional assistance for workers and businesses.

The virus has already revealed the gathering strength of Mr. Erdogan’s opponents. Increasingly confident and active opposition politicians, including the mayors of Istanbul and Ankara — Ekrem Imamoglu and Mansur Yavas — have marked Mr. Erdogan’s every step, and have often been ahead of him in offering assistance to their constituents.

The opposition mayors have forced Mr. Erdogan to provide free face masks for the entire population — an added cost when the government had at first planned to have private companies sell masks to people. The government has also offered free health care for all, including for those who have not made social security contributions.

Well aware of the government’s economic straits, the opposition has not eased the pressure during the pandemic. If anything, it has increased its efforts to see that the people of Turkey do not lose out.