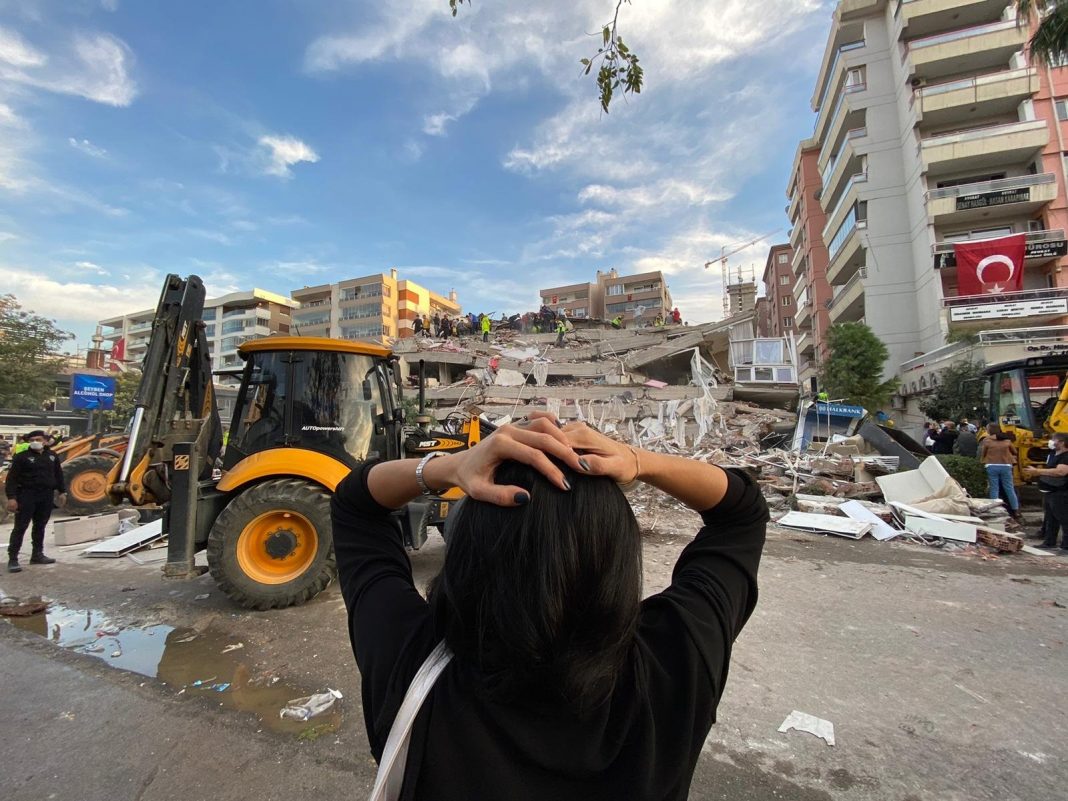 On 30 October 2020, a 6.6-magnitude earthquake struck off the coast of Seferihisar district in the western province of Izmir, Turkey. The tremors occurred in the Aegean Sea at a depth of 16.5 kilometers (10.3 miles) but were felt across Turkey’s third-largest city and as far away as Istanbul in the north. The quake was also felt across the eastern Greek islands and even in the Greek capital Athens.

According to the latest statement of the Disaster and Emergency Management Authority AFAD on October 31, as of 9.45 a.m. 25 people have lost their lives and 804 people have been injured in İzmir (743) as well as in the neighboring provinces of Manisa (5), Balıkesir (2) and Aydın (54). While the search and rescue efforts have been reportedly completed in eight damaged/collapsed buildings, the efforts are still ongoing in the remaining nine buildings. The AFAD has also said that as of 4 a.m. on October 31, 341 aftershocks shook the region, 31 of these aftershocks were higher than 4-magnitude.

Boğaziçi University Kandilli Observatory and Earthquake Research Institute Director Prof. Dr. Haluk Özener evaluated the earthquake off the Seferihisar district of Izmir, with a presentation at the press conference held at the Regional Earthquake and Tsunami Monitoring and Evaluation Center in Kandilli.

Prof. Dr. Haluk Özener, expressing his condolences to the relatives of those who lost their lives in the earthquake, said, “According to first impressions, it was determined by us that a fault of approximately 30-40 kilometers had been broken. We are talking about a displacement of approximately 1.2 meters. There is a displacement of approximately 1.2 meters. Normal faulting earthquake. We recorded 21 earthquakes with magnitudes 2.8 to 4.9 in 1.5 hours after the earthquake in our center. Aftershocks are expected to last up to 15 days a week. Naturally, we can expect aftershocks up to about 5.8-6 degrees below one degree. ” he spoke.

Explaining that the Aegean Region, where the earthquake was experienced, is a highly seismically active region, and that there has been an intense earthquake activity in the mainland and the sea, Özener said that since 1912 there have been earthquakes of more than 6.5 magnitude, most recently in the Aegean Sea in 2017. He reminded that there was an earthquake of 6.6 magnitude in Turkey.

“The tsunami occurred after the 2017 Bodrum Gökova Gulf earthquake. We are not used to it in our country. It was also a small tsunami. Today, the tsunami also occurred. Kandilli Observatory and Earthquake Research Institute The service provider of the tsunami warning center in the Aegean, Mediterranean, Black Sea and connected seas.” 9 minutes after the earthquake, it sent a tsunami warning message to all member countries and to the Disaster and Emergency Presidency in our country.”

Stating that there is always the possibility of an earthquake of this magnitude in the Aegean Sea, Özener said, “There are many faults in the Izmir region, the Aegean region, the sea and these faults always have the potential to produce more than 6 earthquakes.” said.

Prof. Dr. Özener stated that there are many faults on land in the Aegean Region and that they are capable of generating earthquakes, and that after the 6.6 magnitude Bodrum-Kos earthquake in 2017, there were around 10 thousand aftershocks ranging from 1 to 5.5 in size. He noted that they recommend citizens to be vigilant at this point.

“Has any activity been observed in the fault lines in the Istanbul region after the Izmir earthquake?” Özener said, “No, two very different fault lines. One is from the Aegean opening regime, one is from the northern branch of the North Anatolian fault. Very different structures. Both geography, faults and tectonic structure are different. The two are independent from each other.” he answered.

Özener stated that it is possible for very close faults to transfer stress to each other, that it is not possible to say anything scientifically about which fault can trigger which, and serious research is required.

Prof. Dr. Özener added that they have recorded 35 aftershocks, the largest of which is 4.9 magnitude so far.

Boğaziçi University Kandilli Observatory Earthquake Research Institute Deputy Director Prof. Dr. Ali Pınar noted that there were 22 earthquakes larger than 6 in the region in the last century, the region was very active and there were many fault lines.

Stating that there is an increase in stress around the fault after the current earthquake in the region, Pınar said, “Therefore, since there are many large and small faults in the region, it causes an increase in tension especially in neighboring faults for a certain period of time and there may be aftershocks. Therefore, it is worth paying attention to these possibilities. there is.” used the expressions.