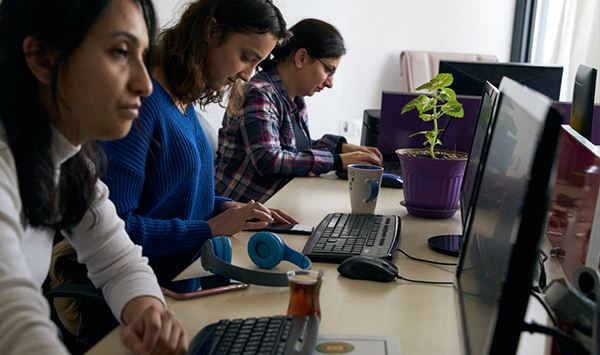 « Kurdish journalists continue to be killed or jailed simply for reporting the news, as reporters vowed to persist in their dangerous but essential work » explain Steve Sweeney in Morning Star.

Editor of Jin News Gulsen Kocuk explained that the agency is a constant target for the Turkish state as it reports the truth on the front line of the struggle for democracy.

“Women’s organisations are strong here,” she told the Morning Star. “Jin News is vital in creating a space for women’s voices in a male-dominated media.”

The news organisation was founded as Jinha on March 8 — International Women’s Day — in 2012, with the award-winning artist Zehra Dogan one of its first reporters.

All the staff at Jin News are women, which makes it unique in Turkey’s patriarchal landscape, as well as a target for the state.

“Of course Kurds, women and journalists are not the only targets,” Ms Kocuk explained. “Anyone who is not Turkish or Sunni [Muslim] is declared the enemy.”

“There is a great legacy of women’s struggle for freedom in Turkey,” she said, adding that Jin News “builds on that ignored history.”

She said the agency aimed “to make women’s struggle visible” and ensure that violations are seen not as isolated incidents, but as part of the state’s male-dominated mentality.

Jin News remains important while the Turkish state and media stands on the side of men and state officials who kill women, Ms Kocuk said.

“That being the case, journalism is not just a profession, it is a responsibility,” she said, calling for the strengthening of international networks to “unite the struggle.”

Mesopotamia Agency reporter Mehmet Aslan stressed the importance of journalists as arbiters of the truth, comparing the media organisation to a flower raising its head towards the sun.

“It is trampled underfoot all the time, but it persistently raises its head, taking its strength from the source.

« MA takes its source from the people,” he said.

“MA draws its strength from those who rebel against oppression, from the needs and concerns of the peoples of the world.”

Mr Aslan — who was himself released from prison in January 2020 — said the agency was targeted because of its pursuit of the truth.

More than 20 of its associated reporters are believed to be behind bars and journalists are regularly hauled into custody.

Most notably, MA reporters were among those jailed last year after uncovering Turkish military atrocities in Van province, when two Kurdish farmers were thrown out of a helicopter and soldiers threatened to burn down their village.

“We reveal what is kept in the dark … we make a note in history,” Mr Aslan said.

“Kurdish journalists are always punished or killed while they report the news.”

But “for us journalism is the future of society and for the children not yet born into this world,” he added.

“For us, journalism is the sweat we shed while chasing the truth.”