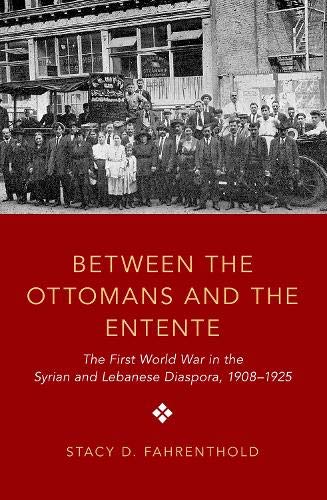 “Since 2011 over 5.6 million Syrians have fled to Turkey, Lebanon, Jordan, and beyond, and another 6.6 million are internally displaced. The contemporary flight of Syrian refugees comes one century after the region’s formative experience with massive upheaval, displacement, and geopolitical intervention: the First World War.

In this book, Stacy Fahrenthold examines the politics of Syrian and Lebanese migration around the period of the First World War. Some half million Arab migrants, nearly all still subjects of the Ottoman Empire, lived in a diaspora concentrated in Brazil, Argentina, and the United States. They faced new demands for their political loyalty from Istanbul, which commanded them to resist European colonialism. From the Western hemisphere, Syrian migrants grappled with political suspicion, travel restriction, and outward displays of support for the war against the Ottomans. From these diasporic communities, Syrians used their ethnic associations, commercial networks, and global press to oppose Ottoman rule, collaborating with the Entente powers because they believed this war work would bolster the cause of Syria’s liberation. Between the Ottomans and the Entente shows how these communities in North and South America became a geopolitical frontier between the Young Turk Revolution and the early French Mandate. It examines how empires at war-from the Ottomans to the French-embraced and claimed Syrian migrants as part of the state-building process in the Middle East. In doing so, they transformed this diaspora into an epicenter for Arab nationalist politics.

Drawing on transnational sources from migrant activists, this wide-ranging work reveals the degree to which Ottoman migrants “became Syrians” while abroad and brought their politics home to the post-Ottoman Middle East.”

Stacy Fahrenthold is Assistant Professor of History at the University of California, Davis. She specializes in migration and refugee histories of Syria, Lebanon, and their respective diasporas in the Americas. Her first book, “Between the Ottomans and the Entente,” received the Khayrallah Prize in Migration Studies and the Syrian Studies Association Book Award.

Share
Facebook
Twitter
Pinterest
WhatsApp
Previous article“With Presidential Government System of 2017 , the Influence of the executive of The Judiciary of Has increased ” The Report Showed
Next articleIfea’s Workshop Book : “Forms And Institution of Justice – Legal Actions In Ottoman Contexts ” by Yavuz Aykan And Isik Tamdogan (ED)