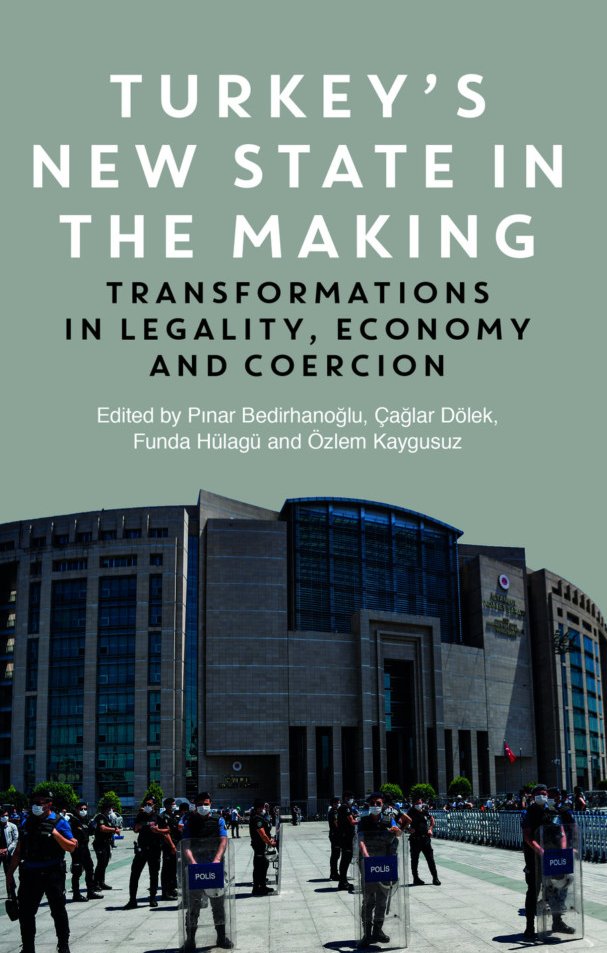 “This work problematizes the AKP-led radical re-making of the Turkish state by taking into consideration the constitutive role of crisis-ridden global neoliberal transformations on the domestic social and economic dynamics and processes.

Since the Gezi uprisings in June 2013 and AKP’s temporary loss of parliamentary supremacy after the June 2015 general elections, sharp political clashes, ascending police operations, extra-judicial executions, suppression of the media and political opposition, systematic violation of the constitution and fundamental human rights, and the one-man-rule of President Erdoğan have become the identifying characteristics of Turkish politics. The failed coup attempt on 15th July 2016 further impaired the situation as the government declared emergency rule at the end of which a political regime defined as the “Presidential Government System” was established in July 2018.

Turkey’s New State in the Making examines the historical specificities of the ongoing AKP-led radical state transformation in Turkey within a global, legal, financial, ideological, and coercive neoliberal context. Arguing that rather than being an exception, the new Turkish state has the potential to be a model for political transformations elsewhere, problematizing how specific policies the AKP adapted to refract social dispositions have been radically redefining the republican, democratic and secular features of the modern Turkish state.”

2.      Deconstitutionalization and the state crisis in Turkey: What role for the Turkish Constitutional Court and the European Court of Human Rights?, Özlem Kaygusuz and Oya Aydın

5.      Understanding the recent rise of authoritarianism in Turkey in terms of the structural contradictions of capital accumulation process, Fuat Ercan and Şebnem Oğuz

8.      AKP’s income-differentiated housing strategies under the pressure of resistance and debt, Özlem Çelik

9.      The transformation of the state-religion relationship under the AKP: The case of the Diyanet, Zana Çitak

10.  From military tutelage to nowhere: On the limitations of civil-military dualism in making sense of the rise of authoritarianism in Turkey in the 2010s, Ahmet Akkaya

11.  Courtrooms as solidarity spaces and trials as sentences: Defending your rights and asking for accountability in Turkey, Zeynep Alemdar

14.  War on drugs: A view from Turkey, Zeynep Gönen

15.  “The law of the city?”: Social war, urban warfare, and dispossession on the margin, Çağlar Dölek