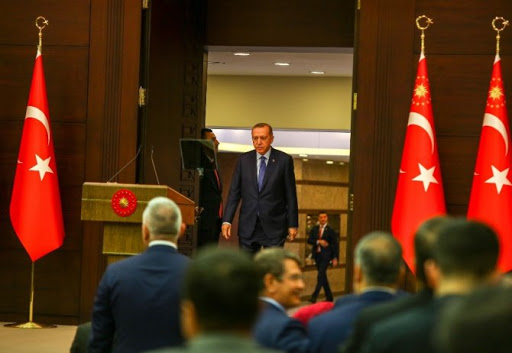 Online newspaper Ahval invited scholars to evaluate President Erdoğan’s latest statements from Ankara about the corona virus outbreak on 18 March. In a webcast moderated by Yavuz Baydar, Prof. Eser Karakaş participated from Strasbourg, Prof. Cengiz Aktar from Athens, Prof. Nora Şeni from Paris, as well as Alin Ozinian from Yerevan. They commented on the President Erdoğan’s speech on measures against coronavirus pandemic.

You can access the webcast by clicking here (only Turkish): Erdoğan’ın koronavirüs açıklamaları: ‘Dağ fare doğurdu’

In evaluating the speech, Alin Ozinian said that President Erdoğan had a problem of transparency in his assessment on coronavirus. The general belief among the people in Turkey is that the number of people sick due to the corona virus is quite higher than the officially declared numbers. She said that there was no emphasis on how to manage risk and the country’s precautions against economic crisis seemed unrealistic. She claimed that Erdoğan, and so Turkey, has a denialist policy on coronavirus and the economic troubles that this disease brings with it.

Prof. Cengiz Aktar stated that President Erdoğan’s speech did not give confidence regarding health and economic measures. He stated that, apart from the controversial economic measures, almost nothing feasible about the medical measures against coronavirus. For him, Erdoğan was trying to calm people, while on the contrary it is indispensable to create some panic. There were expectations about health, but we heard economic measures from Erdoğan, he said.

Prof. Eser Karakaş drew attention to the recent developments in terms of international politics. He underlined how rapidly countries started to change politics with the threat of coronavirus and mentioned that were contacts even between Jerusalem and Tehran about coronavirus pandemic. He reminded that the French president qualified the current situation as war. President Erdoğan announced an economy plan with a budget of 100 billion TL to fight against the difficulties of the pandemic. He stated that in such a war period, the war administration without inflation has its own financing methods. In this case, as he stated, you either borrow or raise taxes. Raising the taxes more in Turkey is almost impossible, for him. It is also very difficult to borrow money from inside or outside, as he stated. So, the possibility of managing this process without inflation is very weak. And the result of it would take the country back the 90s financial crises. For him, it is impossible to implement President Erdoğan’s economy package without inflation. So, more difficult days are coming for Turkey.

Prof. Karakaş emphasized another issue about Erdoğan’s meeting. He said that although the President organized this meeting as the President of the country there were no representatives of the political parties. They were not invited, there were only AKP representatives. And also, although it was a meeting on coronavirus, Turkey Medical Association and Turkish Pharmacists Union were not there.

Prof. Nora Şeni stated that, while commenting President Erdoğan’s speech, we speak as if he has a minimum sense of “accountablility” which he has not.  We are talking about the budget deficit problem that Erdoğan promises will create, we are inquiring how he will finance the economy package. But the actual Turkish President do not feel he will be accountable for what he is promising. There is no expression of public opinion in Turkey anymore, no freedom of speech, no independent media who will ask for account. The political arena is totally shrunken. We face a society she said that cannot ask, criticize, question, make suggestion or callout. Since this is not the case, the society cannot have a memory about what have been said. This is what she meant when speaking about the lack of accountability.

Besides the lack of accountability, Erdoğan discourse’s striking points are based not on rational thought and on compelling measures against the spreading virus but on religious belief. On health-related issues she added, President Erdoğan explained that to prevent contamination the preparation to prayer five times a day as Islamic ritual implies is already sufficient. Nora Seni added that in this regard his speech was quite convincing for his people, for the citizens who voted him to whom this speech is addressed. He was extremely fatherly speaking a language he trusts his voters will rely on: Father of State. However, the part of his speech about economic measures will not be questioned and he takes for granted that he is not accountable anyway.

Ergun Babahan said that the claim that Turkey is in better conditions than Italy and Germany is not true. For him, this is because that the corona virus test is not done to suspicious cases in Turkey, and if it is done, the results are not reported to the test subjects. An important issue he raised was that southeastern borders are still open to a country like Syria, where there is no control, no experience and no knowledge about health. Warriors and jihadists are regularly coming/going to/from Turkey. He stated that the real of the number of patients with coronavirus is quite more than the government declared. He said that it is very likely that we will soon see the number of cases expressed in thousands. China, Russia, Iran, India, Pakistan and Turkey have escaped to face the disease, he said, so they will pay a heavy price. He also reminded the World Health Organization’s warning on Afrika that the corona virus would have more disastrous effects there. He also reminded me that the only hope is to find the vaccine as soon as possible.