Soldier Killings in IDLIB And Ankara’s Relation With West 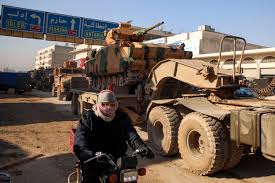 On February 3, six Turkish soldiers and a civilian contractor attached to the Turkish military were killed by Syrian regime forces in Syria’s northwestern province of Idlib. Even though Turkey’s Libya mobilization occupied the agenda and left the Syrian mobilization of Turkey in the background, the latest incident has recaptured the attention about Turkish forces in Syria as well as to the Moscow/Ankara relationships.

For Semih Idiz, a columnist for Al-Monitor’s Turkey Pulse, Turkey’s adventure in Syria is raised to a different and much more dangerous level for Ankara. “Many Turkish analysts, especially those who argue that Ankara’s Syria policy was misguided from the start, believe that Turkey and Syria are effectively in a state of undeclared war today, and that Russia is a party to this conflict on the side of Damascus.” he explains. “Angry statements by President Recep Tayyip Erdogan regarding developments in Idlib — during which he has also started to target Russia — have also been fueling this perception.”

Will developments in Idlib force Ankara to turn to the West again? Semih Idiz analyzed the situation based on different levels:

“Whichever route it decides to take in the end, it is clear that Ankara’s choices in Syria remain limited, and that its reliance on Russia is proving to be disappointing, as many suspected it would be all along.” he states. “Many expect the way ahead in Turkish-Russian ties to be marked by increasing tensions that the sides will have to manage carefully in order to avoid any serious breakdown in their burgeoning political and economic relationship. Meanwhile, it appears that efforts spearheaded by Moscow aimed at trying to bring Ankara and Damascus closer will be undermined by this latest development. Erdogan and his government will be hard-pressed domestically to continue with these contacts at a time when the Syrian side is seen to be killing Turkish soldiers.”