Syria to be key topic in Erdogan-Putin summit – Al-Monitor 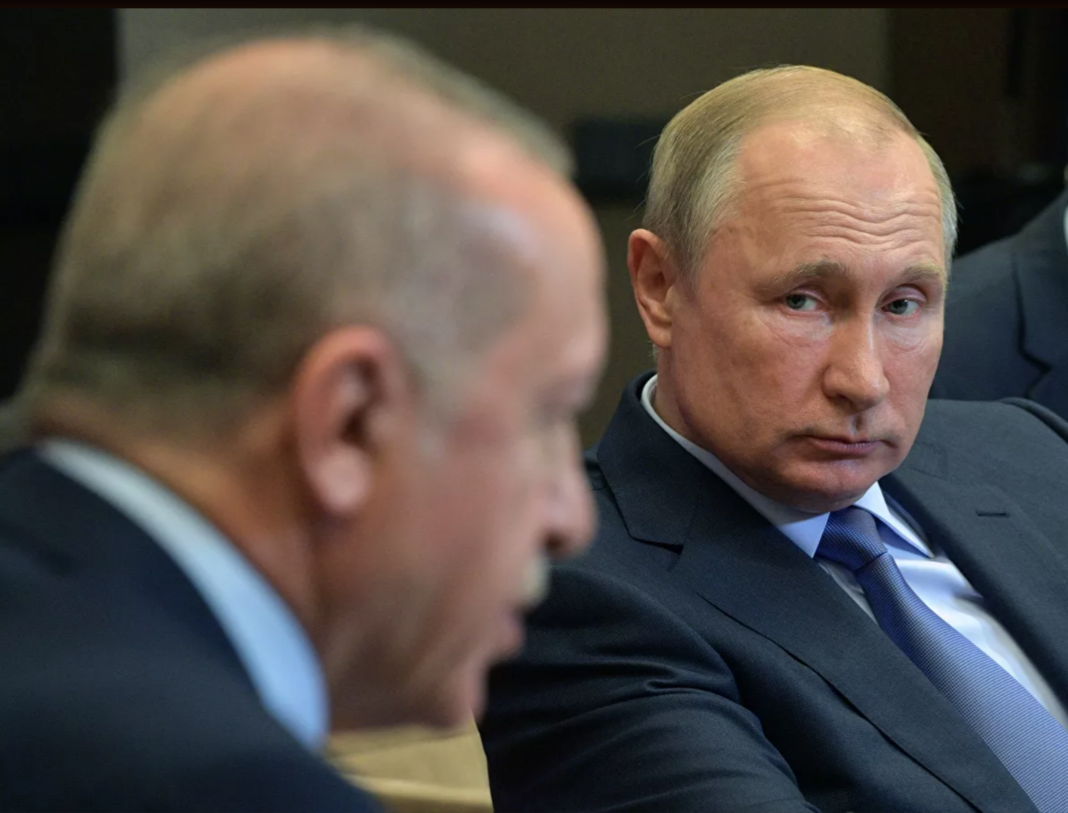 « The Turkish and Russian presidents are expected to discuss Syria in Sochi, as well as Ukraine, anti-missile batteries and natural gas, » reports Amberin Zaman on Al-Monitor.

Turkish President Recep Tayyip Erdogan is due to travel to Russia Wednesday for the second time this year to meet with Russian leader Vladimir Putin in Sochi to hash out a range of critical issues, from Syria to Ukraine and anti-missile batteries to natural gas.

Coming days after Erdogan aired his dissatisfaction with NATO ally the United States, suggested that Turkey would acquire a second set of the Russian made S-400 anti-missile system and asserted that US forces should leave Syria, the stage is set for what may have otherwise been a less cordial reception at the Kremlin.

Relations between the fellow autocrats have cooled ever since Russian air force jets bombed Turkish positions in Syria’s northwest province of Idlib in late February, causing the deaths of at least 37 Turkish soldiers and many more Sunni opposition rebels allied with Turkey.

It may be no coincidence that Turkey has since edged even closer to its other large Black Sea neighbor Ukraine, selling it armed drones and backing its demands that Russia return the Crimean peninsula it occupied in 2014 and end the conflict in the Donbass. Erdogan repeated those demands in his speech to the UN General Assembly summit, prompting a flurry of angry commentary in the Russian media.

For context, Erdogan and Putin spoke four times over the phone in February and 23 times in 2020. They have spoken only nine times since Erdogan traveled to Moscow in March to sign a new accord over Idlib, mostly on Russia’s terms, according to Aydin Sezer, a Turkish political analyst who closely monitors the Russo-Turkish relationship.

Russia continues to rebuke Turkey over its failure to fulfill its pledges to eliminate the threat posed to its forces in Syria, principally by Hayat Tahrir al-Sham (HTS), the Sunni extremist group that holds sway over much of Idlib and with which Turkey enjoys an opaque alliance managed by its spy service MIT.

Russia sees Idlib as a “terrorist incubator which exports terrorists beyond Syria’s borders and poses a threat to Russia’s security,” Sezer noted. That view is shared to some extent by the Biden administration, which has made it clear that it’s not interested in engaging with HTS, despite its leader’s recent efforts to repackage himself as some kind of a moderate. The outfit is designated as a terrorist organization by the United States, the United Nations and — somewhat incongruously, some would say — by Turkey. As such, Washington is not egging on Turkey to take on the regime and Russia in Idlib and elsewhere in the way that the Trump administration’s Syria envoy, Jim Jeffrey, so enthusiastically did.

Piling on the pressure in the run-up to tomorrow’s summit, Russian air force jets have been pounding rebel positions in and around Idlib, widening their assault to Turkish-occupied zones in the mainly Kurdish enclave of Afrin and near Tell Tamir in the so-called “Peace Spring Zone » occupied by Turkey in its latest cross-border offensive against the US-backed and Kurdish-led Syrian Democratic Forces in October 2019.

« Russia’s escalation has intensified this week and begun from Idlib province and now stretches to areas in northern Aleppo province along the border, » Major Youssef Hamoud, a spokesman for the Turkish-backed Syrian National Army, told Reuters. Turkey is in turn beefing up its military presence with men and equipment. « The Turkish army deployment is taking a combat posture with all the military bases reinforced and has poured in convoys, whether of armored vehicles, fighters or equipment, » Hamoud said.

Turkey’s main worry is that any full-scale offensive on Idlib will drive up to a million Syrians toward the Turkish border. Resentment is soaring toward the estimated 3.7 million Syrian refugees currently in Turkey and those feelings are being cynically exploited by the opposition in the run-up to presidential and parliamentary elections that are slated to take place in 2023. With his poll numbers slipping to unprecedented lows, Erdogan is therefore anxious to preserve the status quo in Idlib, at least until then.

But it may no longer be possible. Ankara’s best bet at this point is to work with the regime to contain an influx of further Syrians, not against it, Sezer argued. “Turkey needs to fix its relationship with Damascus. If Erdogan doesn’t, the opposition certainly will, should it come to power,” he told Al-Monitor.

Either way, “Ankara appears to believe its troop deployments have changed the dynamic. Moscow may not,” observed Nicholas Danforth, the author of the newly published “The Remaking of Republican Turkey: Memory and Modernity.” Danforth added, “Erdogan is going into the meeting emphasizing his estrangement from Washington. I am not sure that strengthens his hand. Moving closer to Moscow may make Putin more hesitant to alienate Ankara over Idlib, but it will leave Turkey more exposed to Russian pressure in the long run.” US officials warn that should Turkey proceed with the acquisition of a second set of S-400s it will lead to further sanctions under the Countering America’s Adversaries Act.

Erdogan’s apparent volte-face — until his trip to New York last week, he seemed determined to patch up ties with Washington — was prompted by President Joe Biden’s failure to meet him on the sidelines of the UN General Assembly summit. The famously thin-skinned Turkish leader may well have concluded that Biden’s lack of interest stemmed from the fact that he no longer needs Turkey to operate Kabul airport, a role Qatar has claimed, sidelining Ankara, its close ally, in the process.

A common narrative propounded by some pundits contends that Turkish pushback in Idlib and its key role in securing Azerbaijan’s victory against Armenia last year have put Ankara on a more even footing with the Kremlin, as has its corralling of the Russian-backed Libyan warlord Khalifa Hifter.

Turkey’s intervention in Azerbaijan allowed the latter to resolve its 30-year-long dispute with Armenia by force. But it also allowed Russian troops to deploy in the contested Nagorno-Karabakh enclave for the first time since the Soviet Union’s collapse. In Libya too, Ankara and Russia will look to accommodate, not oppose each other.

The most immediately critical issue on the table relates to energy. A contract to carry Russian natural gas from Siberia via the Black Sea to Turkey’s Bulgarian border will expire at the end of this year. Moscow has been pressing Ankara to renew the contract but Ankara kept stalling in what proved to be a grave miscalculation that natural gas prices, including that of the liquefied natural gas that it’s been acquiring in large quantities from US suppliers, would remain low. With natural gas and LNG prices soaring worldwide, Russia will undoubtedly drive a hard bargain, seeking concessions elsewhere in exchange for affordable gas.