Syrian Kurds in the process Resettlement 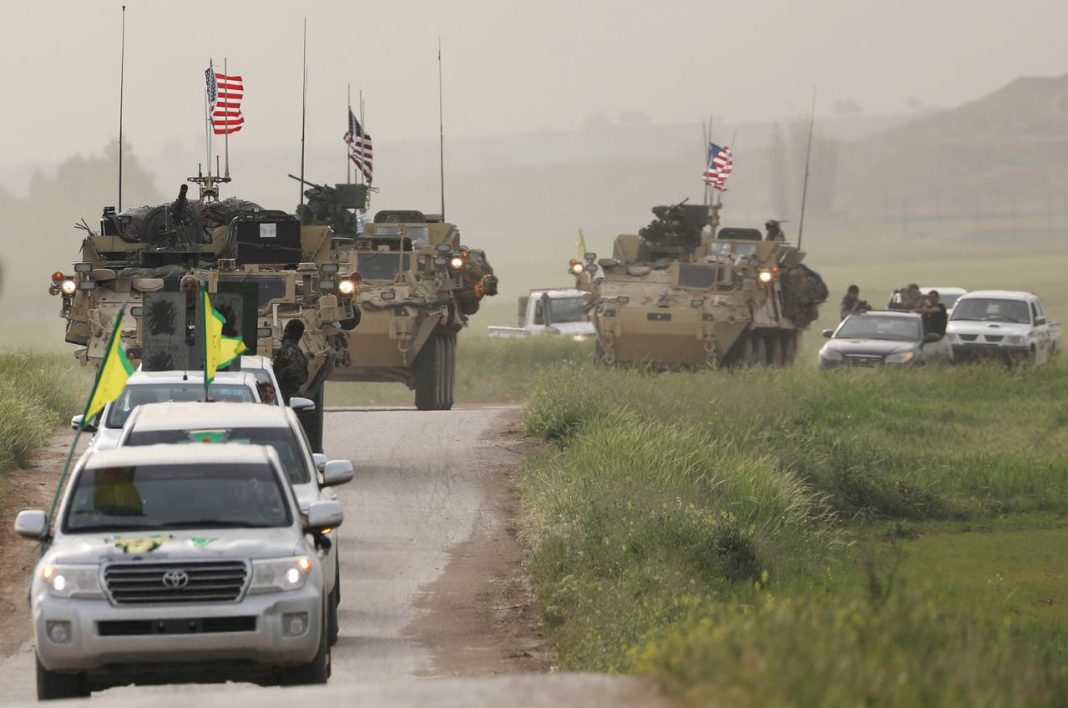 Journalist Fehim Taştekin wrote about the options in front of Syrian Kurds with the recent developments in the international politics around the Syrian war. His article, which was published on online newspaper Duvar on December 14 can be read below.

Tough times ahead for the Kurds in Syria

Whether it be the U.S., Russia, Iran or the Syrian regime, all seem to want to re-settle the Syrian Kurds. While American’s policy is open-ended, it is also murky. An example of this came when Congress failed to determine the amount of aid the U.S. would provide to its partners fighting against ISIS in the defence budget for 2020, leaving it to the Secretary of Defence.

General Commander of the Syrian Democratic Forces (SDF) Mazloum Abdi said the U.S. commanders wished to remain in the region to pursue eight particular goals. Amongst these are: combating ISIS, safeguarding oil, controlling the air space, training and supporting the SDF and promoting civilian projects. Yet none provide an truly convincing explanation as to why the U.S. remains in the region. Mazlum Abdi contends the U.S. is staying put due to the new equilibrium that has been formed.

My humble idea is that a certain scheme is underway. Such a scheme would provide Israel’s security in spite of Trump’s erratic behaviour. Within the framework of this design, Iran could be undermined and Syria would be compelled to change its camp. The practical aspects of this setup have to do with monitoring Iranian moves and interfere when necessary. It has also to do with depriving Syria of its natural resources. The U.S.’s engagement with the Kurds is constrained by its partnership with Turkey. When faced with the question of siding with the Kurds or a NATO ally, the choice is always Turkey. As Secretary of Defense Mark Esper stated there was no deal that “allows us to conduct military operations in support of the Kurds against the Turks, a 70-year NATO ally.”

In October, the U.S. gave the green light to the “Peace Spring Operation”, allowing Turkey to take over the north of Syria. They have passed on the burden of curbing Turkey’s advances to Russia. The U.S. has now drawn a new zone of tutelage for themselves: from Al-Malikiyah on the shore of Tigris, to Al-Qahtaniyah and Qamishli, and from there to roads leading to Al Hasakah and Deir ez Zor.

Accordingly, they will build military bases and deploy armed troops there. One of the U.S.’s priorities is to keep the Semalka border crossing open for logistic passing. It is a crossing Turkey wishes to capture in order to block circulation and transports from North Kurdistan and Rojava. In this route, there are facilities in which ISIS members are held. In parallel to this deployment, the U.S. is also paving the way for the SDF to build ties with Gulf countries.

The SDF maintains relationships with Abu Dhabi and Riyadh. Do such ties have anything to do with a proposal to re-settle the Kurds to oil-rich regions? Trump had asserted such a plan would inevitably result in a clash between Kurds and Arabs.

“Kurdish barrier” against the “Shia Crescent”

Moreover, according to a conspiracy theory I heard from friends in Erbil, Americans would wish to re-settle 12,000 Kurds from Turkey based at the Makmur Camp on the Iraqi side to oil-rich regions. It would serve as a “Kurdish barrier” against the “Shia Crescent” as well as a softening factor to break an ISIS-prone mind-set that prevails amongst Arab tribes. The “Kurdish Barrier” sounds as fictitious as the “Shia Crescent”, though it would appear as a grand strategy.

Meanwhile, the U.S. has also encouraged intra-Kurdish dialogue efforts. Several dialogue meetings have been held between the Kurdish National Council (KNC) and Movement for a Democratic Society (TEV-DEM). Mazlum Abdi has emphasized the importance of uniting forces to protect the Kurds’ achievements. The KNC, the party that insists on certain conditions to broker an agreement, believes the TEV-DEM are merely looking for a partner to cover up their own failures. But what is important here is what the Americans are hoping to gain from this. Up until the Turkish intervention, the KNC being made a partner in the Kurdish autonomous administration was regarded as a formula that would soothe Ankara. The deployment of Rojava Peshmergas was even considered. Yet it is too late for this. Still, one should note that Special Envoy James Jeffrey is seemingly wooing Barzani.

Beyond all these confusing moves, to what extent can the Kurds rely on the U.S.? Mazlum Abdi continues to regard the U.S. as a guarantee until a political solution is found.

Yet the U.S. presence does not offer the guarantee of a political solution. Mazlum Abdi contends Washington has pledged the North and East Syrian Democratic Autonomous Administration would participate in the Geneva process and the constitutional committee, but they have not done anything in that regard. In other words, the Americans do not want to do anything that would upset Turkey.

According to Damascus and its partners, the Kurdish-U.S. partnership is blocking the reaching of a solution. They want the U.S. to leave the region. Turkey’s intervention also provides the Syrian administration to recover regions it had lost in 2012. But it does not suit Damascus to begin substantive negotiations as of yet.

Still, the Syrian regime’s position is rather frail. Their influence in the region has not been gained through fighting but through Russian support. There is little Damascus can do to resist Turkey. And while, its deployment of troops carries a symbolic value for it portends the return of the state, the Syrian regime lacks heavy weapons. It will use a political process to transform its symbolic control into actual control. Until it has gained more leeway, Damascus is likely to postpone political negotiations. In other words, the demand of Mazlum Adbi, when he says that, “Assad should take stronger and more courageous steps,” will not be answered until a new equilibrium is formed.

Finally, the continuing attacks against Ayn Isa and Tel Temir despite the ceasefire have paved the way for a new deal with Moscow. The first agreement in October set out that the Syrian army be located at the borders. A new agreement, however, allows the Russian police force to deploy in Tal Temir, Ayn Issa and Amuda. While the institutions of the autonomous administration are not included in the agreements, the Russian strategy of moving the Syrian army into the region is clearly underway.

As the Syrian administration gains grounds, there are signs that it will return to its pre-2011. It is making calculations that it would dissolve the autonomy project in the north after a certain point or minimize the concessions it needs to give. Within this framework, the meeting with Arabic tribes held at Qamishli with Syria’s national security chief Ali Mamlouk was important. It carried the message that it was time to return to the state. It has been reported that Mamlouk put pressure on Arabic tribes to separate their children from the SDF.

Mamlouk maintains close ties to Iran and is the regime’s most prominent anti-American figure. Another important meeting was held in Qamishli which was interpreted as positive with regards to the dialogue between the Kurds and Damascus.

In an interview with Paris Match, President Bashar al Assad said France, the U.K. and the U.S. were violating international law with the pretext of supporting the Kurds. “The Kurds are Syrian, they are not a separate people”, he said. Assad thereby showed his unwillingness to uphold the autonomous institutions the Kurds established for themselves.

The Kurds are “reasonable interlocutors” when it comes to military negotiations. Yet they become a tool of the foreign powers when it comes to carrying the autonomy into a legal framework. As Mazlum Abdi said, “since 2011, our dialogue with the government has always served Syria’s interests. If the government has not collapsed, one reason for has been our dialogue.” Abdi has two conditions to strike a deal with Damascus:

Damascus is calling on troops within the SDF to join the national army. In other words, it does not recognize the SDF. The Kurds want to assess what Russia is capable of doing. The Russians, that have deployed in the three bases evacuated by the Americans, namely Menbic, Tabka and Sırrin, have increased their engagements with the Kurds. Both the Foreign Ministry and the military wing based in Hmeymim have made contacts in the region. Mazlum Abdi is hopeful of this new situation. “Russia is behaving seriously in launching a new dialogue process”, he said.

One of the clearest statements regarding the final approach of the Kurds came from Bahoz Erdal, the commander of the HPG, the Kurdistan Workers’ Party’s (PKK) military wing. “Syria’s Kurdish and democratic issues can be solved with the Damascus administration within the Syrian borders”, he said. “The solution is to be found with Damascus. The black propaganda that Kurds want to split Syria and that the Kurds are the tools of foreign powers is untrue. If Kurds were separatists, they would not have sought to protect Syria as a whole. The Syrian government should overcome its Kurdophobia. If the regime approaches the Kurds with this [negative] discourse, then it would serve Erdoğan’s agenda. Erdoğan wants to provoke the regime against the Kurds. Had the YPG not been formed, the regime would have not remained. The regime should be thankful to the Kurds.”

This statement corresponds to the facts of the region and the current realities on the field. Yet this statement also reflects the Kurdish movement’s wish to return to its original position. The movement had diverted from its strategy in 2012 by relying too much on a partnership with the U.S.

Still, a partnership with the U.S. imposes a certain framework that impedes a road back to Damascus. Can the Kurds find a solution through a partnership with Damascus whilst simultaneously cooperating with the U.S.? In this context, Russia also expects the Kurds to be clear on their position? In order to overcome this congestion, the equilibriums must be demolished and rebuilt. Tough times lie ahead for the Kurds.