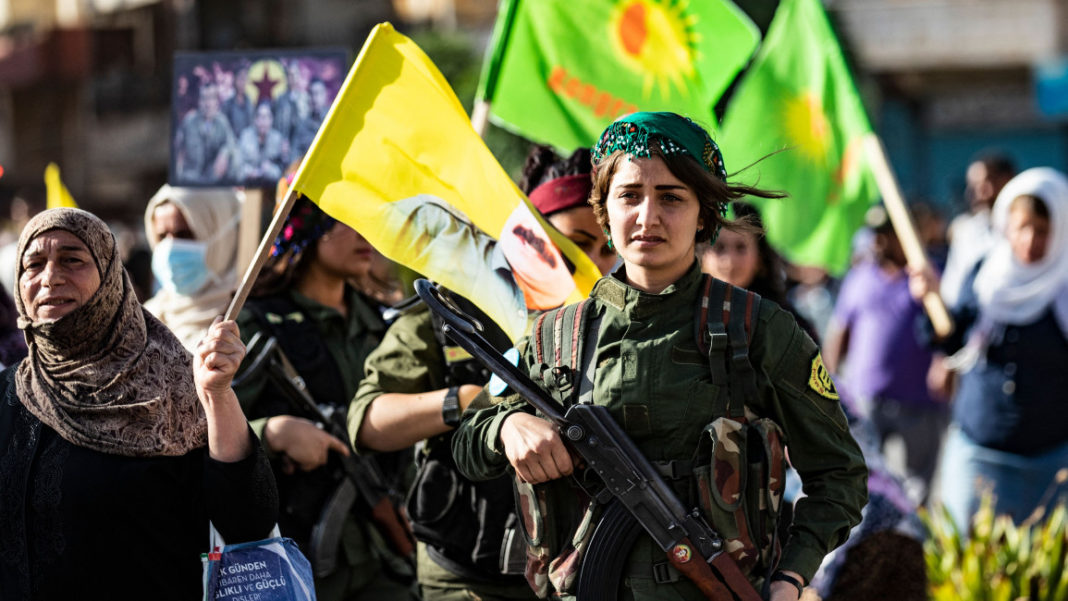 Delegations from Kurdish-held northeast Syria and the Turkey-backed Syrian National Coalition will meet separately with US officials this week, reports Elizabeth Hagedorn on Al-Monitor.

Two Syrian political movements that offer competing visions for the country’s future are paying official visits to Washington this week.

Both the US-backed Kurds and the Turkey-supported opposition are there to seek assurances from the Biden administration that Syria won’t be forgotten in the midst of what many in the region perceive as America’s gradual retreat from the Middle East.

In their highest-level visit since the pandemic began, political representatives for the Syrian groups —  the National Coalition for Syrian Revolution and Opposition Forces (commonly known as the Syrian National Coalition) and the Kurdish-led Syrian Democratic Council (SDC) — have a string of meetings planned, but not with each other.

Neither side views the other as a legitimate representative of the Syrian people. The mutual distrust was cemented by multiple Turkish military offensives in largely Kurdish areas of northern Syria that were carried out by Syrian opposition factions loyal to Ankara.

Both groups, however, are pushing for a resolution to the decade-long conflict as the balance of power in Syria is tipped heavily in President Bashar al-Assad’s favor. His forces have managed to claw back most of the country — all but a pocket of rebel resistance in northwest Syria and a Kurdish stronghold in the semi-autonomous northeast.

The goal is to bring fresh attention to the tangled civil war in Syria, a country that has ranked low among President Joe Biden’s foreign policy priorities. The Biden administration has yet to conclude an internal review of its Syria policy and in another sign of the country’s waning significance, Biden did not appoint a special envoy to spearhead diplomatic efforts.

“Clearly, Syria is not a priority for the United States as much as other topics in the region,” said Qutaiba Idlbi, the Washington-based representative of the Syrian National Coalition.

But as other regional crises demand attention, the bloodshed in Syria continues. Daraa, the cradle of the Syrian uprising, is still reeling from a government-imposed siege and fighting that displaced thousands this summer. In impoverished northwest Syria, Idlib’s simmering conflict threatens to boil over and unleash another wave of displacement.

“We want to engage with the US administration to convince them that at least if there is a clear attempt to step away from Syria, to use the levers that the administration has to push the political transition forward instead of just giving away the leverage we have,” Idlbi said.

Any political settlement must include recognition of the Kurdish-run autonomous administration of northeast Syria, the delegation led by the president of the SDC’s executive committee, Ilham Ahmed, will tell US officials this week. Joining Ahmed in the meetings, which began last week, are local officials Nazira Gawriya, co-chair of the Syriac Union Party, and Ghasan al Yoysef, co-chair of the Deir ez-Zor Civil Council.

Topping their agenda is ensuring American troops remain in Syria until a political solution is reached, said Sinam Mohamad, the SDC’s envoy to Washington. Currently, some 900 US troops are stationed in Syria assisting the Kurdish-led Syrian Democratic Forces fight the remnants of the Islamic State as well as contain Iranian influence in the region.

“The Biden administration has many times declared that they will not withdraw from Syria. This is very important to us,” Mohamad said.

Another pressing concern are the makeshift SDF-run prisons housing roughly 10,000 IS prisoners, many of whom Western governments have refused to bring home and prosecute.

“They are so dangerous,” Mohamed said of the detainees. “It is a burden that the [autonomous] administration has to shoulder. Nobody else.”

The SDC’s top diplomat in Washington said her delegation is asking the United States and coalition partners for additional support in securing the detention facilities, as well as for economic assistance to stabilize the region.

As the Kurds and Syrian opposition press for US engagement, neighboring countries are cautiously welcoming the regime back into the fold — and lobbying Washington to join them. The United Arab Emirates and Bahrain have reopened their embassies in Damascus and Oman has reinstated its ambassador.

Normalization is expected to be a major issue in talks this week between Biden officials and the Syrian opposition. The delegation is particularly concerned that the administration might waive US sanctions under a regional plan for energy-starved Lebanon to receive gas and electricity transported through Syria.

“The problem with the steps that are being taken, especially economically, like the Arab Gas Pipeline, is that we’re basically giving Assad a political prize for no concession in return, » Idlbi said.

He added, “From the history we have with the Assad government, we know once they get something there’s no commitment whatsoever to any political process.”

Elizabeth Hagedorn is a correspondent for Al-Monitor covering Middle East policymaking in Washington and breaking news. She previously reported on the region as a freelance journalist in Turkey and Iraq for publications including Middle East Eye, The National and The Guardian.