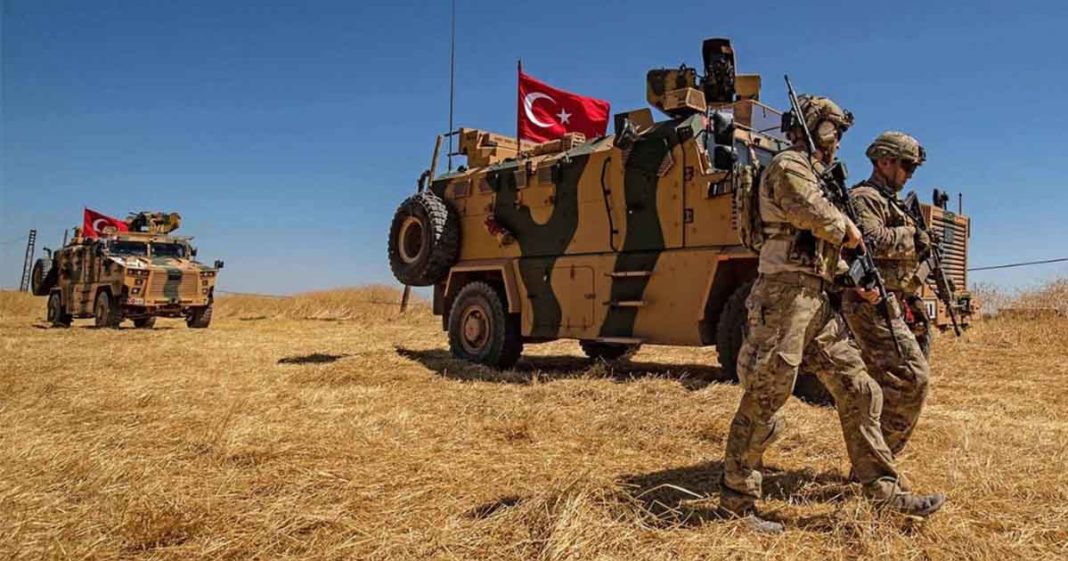 « The Turkish state’s daily threats to occupy new territories in northern and eastern Syria, and the indiscriminate bombing of civilians and their villages — which have recently killed entire families — are leading to catastrophic humanitarian, political, and security consequences, in addition to worsening economic crises in the region » reports Bedran Çiya Kurd in Ahval News.

The previous military operations of the Turkish state’s war machine relied on the so-called “Syrian National Army”. The members of this army, unfortunately, are mainly those of the Syrian population who have agreed to become a tool in the war plans of the ruling government coalition in Turkey, the Justice and Development Party (AKP) and the Nationalist Movement Party (MHP) — not only in Syria but also in other regions. This has led to polarisation among Syrian national groups, the spread of wars and conflicts, and support for jihadist organisations. This policy is neither in the interests of Turkey itself nor the Turkish people, who are not satisfied with being used as a reason for provoking chaos and supporting terrorism, which can also hit them internally.

What the AKP-MHP alliance fears most is the decline of their popularity among parts of the population in Turkey, and the subsequent potential loss of upcoming elections — and thus the beginning of accountability for the entire past period of crimes against civilians, support for terrorists, and corruption.

Anyone who follows the Erdoğan-Bahçeli coalition’s arguments for the military occupation of new Syrian regions, especially in North and East Syria, is well aware that the justification for such unlawful acts can be summed up as: « This region poses a security threat to Turkey » and that they want to « settle Syrian refugees there. » So too, can anyone who hears these declarations immediately realize how false these claims are, as in truth they are far from reality.

The Autonomous Administration of North and East Syria has never posed a threat to Turkey or any other country. This administration has no intention of attacking Turkey, crossing the border, or firing a single shot against Turkish territory. Rather, it has always expressed that it respects all countries’ sovereignty and the existing borders, and it has taken all steps to consolidate peace and security in the border areas. In addition, the claim by the ruling government in Turkey that the Autonomous Administration in North and East Syria — formed by Kurds, Arabs, Assyrians and other groups on the basis of a social contract founded on social solidarity and coexistence — is a « separatist » administration is also clearly baseless, contradicted by reality and what is happening on the ground. The Autonomous Administration is not a « separatist » government, but one that calls for Syrian national unity and a government that respects the rights of all the region’s ethnic groups. Indeed, under the banner of the Syrian Democrats, multi-ethnic groups have made enormous and brave efforts to protect the region from Islamic State (ISIS) terror, sacrificing the lives of more than 11,000 of their children. The people of North and East Syria have protected the unity, civil peace, and integrity of this region by fighting ISIS and the destructive agenda and culture — alien to the culture of the people of the region — imposed upon them.

The Erdoğan-Bahçeli government’s policy has undermined security and continues to spread war and fighting between the ethnic and religious communities in the region by supporting terrorists and mercenaries who occupy various areas, displace their people, and impose on them the insecurity of chaotic conflict, kidnapping, and levies. They turn them into territories under the control of warlords, where each militia lord takes a territory, and the population is ruled by the law of the jungle through kidnapping, intimidation, confiscation, and rape, as has happened and is happening now in Afrin, Serê Kaniyê / Ras al-Ain, Tall Abyad, and other villages. It is these militias that are dividing Syria, by dividing these areas among themselves and working to change demographics by driving out Kurdish citizens and — often forcibly — settling other people in their place.

The demand to “create a safe zone and settle refugees there” is also unfounded. The safe zone already exists and is administered by its population. Military actions and indiscriminate bombardment of civilians, as well as crimes such as displacement, murder, kidnapping, and the confiscation of land and homes, do not create a « safe zone », but rather an area of destruction, sabotage, and displacement, contributing to hundreds of thousands of newly displaced people fleeing the Turkish war machine and the crimes of lawless militias.

This is exactly what was allowed to happen in Afrin and Serê Kaniyê after occupation and displacement. Hundreds of thousands of safe citizens fled war, bombing, and killing, and became displaced persons and refugees overnight. The Turkish occupation has triggered new refugee flows and has further exacerbated the refugee crisis on a regional and global scale.

It is clear that the goal is to expel the Kurdish population from these areas and settle mercenaries’ families in their place. Unfortunately, this project contradicts the legitimacy of human rights in terms of displacement and demographic change at the national and international level, in a clear attempt at ethnic cleansing. These violations are being carried out with the help of countries such as Qatar and Kuwait, where Islamist associations contribute by paying to build houses for jihadist and Islamist families in Afrin and elsewhere.

The catastrophic effects of a Turkish attack on North and East Syria can be summarised as follows:

–Undermining international efforts in the fight against terrorism and creating valuable and irreplaceable opportunities for ISIS to regain geographic control of the regions and thus reach other (new) regions through Turkey. This is Turkey’s main goal: to free these detained terrorists from prisons and bring their families and children back to Turkey, as happened in Ain Issa camp during the Turkish attack on Serê Kaniyê and Tall Abyad.

–Further attacks and occupation will result in a mass exodus greater than that of previous wars, as these areas are home to large numbers of internally displaced persons from previously occupied areas, in addition to the original inhabitants. The burden on the international community will increase due to the large waves of migration.

–The elimination of ethnic and religious cultural diversity by settling families of foreign fighters and displaced persons from other areas in our occupied territories, thus reshaping the demographic structure of this area in accordance with Erdoğan’s alleged plan to establish a « safe zone » along the border line with the aim of changing the identity of the historical and cultural area. This is a violation of international law, a violation of all covenants and charters, and a war crime under international law.

–The transformation of these territories into areas used by terrorist groups, especially ISIS, as safe zones for their terrorist activities, whether aimed against our regions or against Europe, the West, and other areas of the Middle East, as proven in their recent attack on the Hasaka prison.

–The forcible deportation of Syrian refugees from Turkey and their placement in settlements spreading in the occupied territories against their will, so that Erdoğan government can play the Syrian refugee card against his opponents in the election campaign.

–The Erdoğan government aims to establish a Sunni Islamic emirate allied with his regime and impose it as part of the solution for Syria’s future.

Today, the international community must intervene to prevent imminent war, before this new occupation process prepared by the AKP-MHP coalition is launched. We must not allow the Turkish state to exploit the war in Ukraine and the desire of Sweden and Finland to join NATO as a means to legitimise its new war in North and East Syria, the occupation of the territories there, and the expulsion of their inhabitants.

The international community, especially the United States of America, must not bow to the Turkish government’s blackmail and pressure. Rather, we must reject the war policy and put pressure and sanctions on the Erdoğan-Bahçeli regime to make it abandon this war policy and support for jihadist terrorism, stop supporting terrorist militias, and withdraw from Afrin and Serê Kaniyê as well as all other occupied Syrian territories.

The responsibility for what is happening now in our region lies with the entire international community. From countries, governments, and international organisations, how can one explain Erdoğan’s disregard for the will of the international community without deterrence, as he sees no obstacle in front of him to achieve his goals. He has even stated outright that he did not ask permission from anyone to carry out the military operation. The thuggish move by the Turkish state circumvented all international laws and continues to violate them in full view of everyone.

We are ready for dialogue with the international community, especially with the forces of the coalition against terrorism, as we have a common interest in fighting terrorism and ensuring stability in the areas we have already successfully liberated from ISIS. The victory over ISIS in cooperation with the international coalition was a gain for the entire international community. Therefore, these gains should be defended by all means, especially after this geographic location where ISIS was defeated has become a model for coexistence, protection of freedoms and rights, and the core of a political solution throughout Syria.