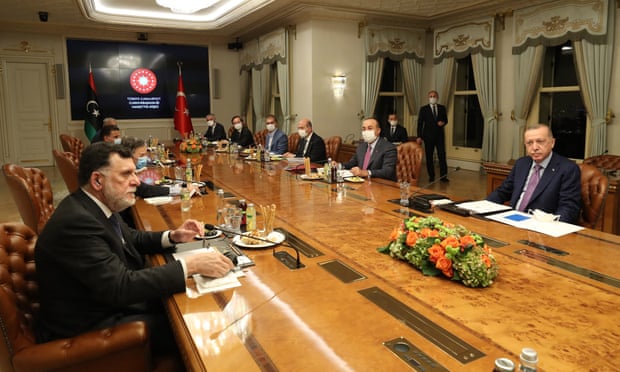 Plans for a durable Libyan ceasefire are to be endorsed by diplomats from 15 countries on Monday, but the value of the commitments made in the virtual meeting are belied by signs that deepening involvement in the country by rival external powers including Russia and Turkey could complicate efforts to form an interim government of national unity.

The Libya conflict has to be seen as not only a long-running power struggle in the country itself but also part of a wider geopolitical dispute in which Turkey’s assertive foreign policy – ranging from the eastern Mediterranean to Azerbaijan – is an increasing factor.

Before the diplomats’ meeting, the Turkish president, Recep Tayyip Erdoğan, appeared to double down on his military and political commitment to the Tripoli-based Government of National Accord (GNA), making the withdrawal of Turkish troops from Libya less likely. At the same time, Russian-backed mercenaries in the Wagner group supporting rival forces in the east of the country have moved to strengthen their military positions.

Erdoğan promised at a high-level ministerial meeting between the GNA and the Turkish government in Istanbul on Sunday to broaden investment in Libya. An oil drilling deal signed with the GNA last November cut across the drilling rights of Greece and Cyprus in the eastern Mediterranean.

Germany, a co-host with the United Nations of the Libya meeting, has also been meditating between Turkey and Greece, and has so far prevented the EU from imposing sanctions on Turkey as punishment for sending military-backed exploration ships into Greek and Cypriot waters. Turkey has been offered talks on a modernised customs union with the EU if it agrees to mediation on drilling rights.

Owing to the GNA’s military vulnerability, Erdoğan is the senior partner in the relationship, and he can use the agreement with the GNA as leverage in talks with the EU. His allies suggested at the Istanbul meeting that he would like the Libyan prime minister, Fayez al-Sarraj, to reconsider his plan to resign by the end of this month, which appears to have triggered a power battle in the GNA-controlled west of the country.

Militias have been in open warfare in Tripoli, and senior political figures have been sacked in what is being described as an anti-corruption drive but which also looks like naked power struggle.

Similar political infighting has been unleashed in the east of the country, held by GNA-opposed forces, as its factions try to position themselves to gain favour with outside sponsors including Russia, Egypt and the United Arab Emirates.

The UAE and Turkey have openly flouted a UN arms embargo that the special envoy for Libya, Stephanie Williams, has described as a joke. Russia has blocked the publication of a report to the UN security council naming the countries and firms in breach.

Speaking at the virtual meeting the UN Secretary General Antonio Guterres claimed a rare opportunity existed to make real progress, but added “all outside parties with influence must put peace first […] The violations of the embargo are a scandal and call into question the basic commitment to peace of all involved.”

Germany hosted a meeting on Libya in Berlin in January, becoming the honest broker in these swirling disputes, and is trying to form a new national unity government before proposed national elections. It is hoping to build on a range of political, military and economic talks between Libya’s east and west held in recent months in Egypt, Switzerland and Morocco.

Under the plan, a new three-strong interim presidential council would be drawn from Libya’s three regions – Cyrenaica, Fezzan and Tripoli. Talks identifying the members of the council and other key institutions such as the central bank were held in Morocco at the weekend.

The US, often accused of neglecting Libya and in doing so allowing Russia, Turkey and the UAE to grab rival footholds, has promised to deploy its full “diplomatic arsenal” to broker a peace.

Germany claims its hope of building on the agreements signed in Berlin have become more plausible since Gen Khalifa Haftar, the military leader in the east, failed in his 14-month battle to capture Tripoli, leading to his ignominious retreat in August.

Since then, Haftar’s chief political rival in the east, Aqilah Salah, the speaker of the eastern-based parliament, has tried to use Haftar’s military reverse to strengthen his influence, and taken a prominent role in talks with the Tripoli-based GNA.

But Haftar has not been completely sidelined. He instead used his continued control of oilfields in the east to engineer a deal on 17 September with some factions in the west, leading to a partial reopening of oil production. Haftar had halted production in January, depriving the country of $10bn in badly needed revenues. Production has crept up to 300,000 barrels a day, but many oilfields remain closed. Haftar hopes the deal showed he remained a player with which the external powers have to reckon.

Haftar, a figure accused of tolerating war crimes, has used militia to retain his control of the oilfields, but has not found a way to sell the oil on the open market.