Turkey struck by ‘sea snot’ because of global heating – Guardian 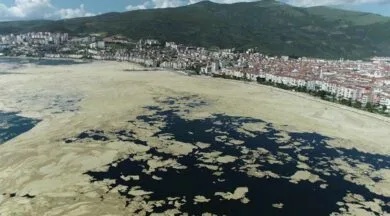 When seen from above, it looks like a brush of beige swirled across the dark blue waters of the Sea of Marmara. Up close, it resembles a creamy, gelatinous blanket of quicksand. Now scientists are warning that the substance, known as sea snot, is on the rise as a result of global heating.

The gloopy, mucus-like substance had not been recorded in Turkish waters before 2007. It is created as a result of prolonged warm temperatures and calm weather and in areas with abundant nutrients in the water.

The phytoplankton responsible grow out of control when nutrients such as nitrogen and phosphorus are widely available in seawater. These nutrients have long been plentiful in the Sea of Marmara, which receives the wastewater of nearly 20 million people and is fed directly from the nutrient-rich Black Sea.

In ordinary amounts, these tiny, floating sea plants are responsible for breathing oxygen into the oceans, but their overpopulation creates the opposite effect. Under conditions of stress, they exude a mucus-like matter that can grow to cover many square miles of the sea in the right conditions.

In most cases, the substance itself is not harmful. “What we see is basically a combination of protein, carbohydrates and fat,” said Dr Neslihan Özdelice, a marine biologist at Istanbul University. But the sticky substance attracts viruses and bacteria, including E coli, and can in effect turn into a blanket that suffocates the marine life below.

This year’s event, the largest yet seen, began in deep waters in late December, and was initially only a nuisance to fishers, who have been unable to cast their nets since the sea snot appeared.

Around this time, Dr Barış Özalp, a marine biologist at Çanakkale Onsekiz Mart University, had a chance encounter with the substance in the Çanakkale strait, the narrow passage that connects the Aegean and Marmara seas.

Özalp was startled by the extent of the sea snot he encountered during his regular dive to monitor corals, his main research focus. It is particularly damaging to immobile organisms such as corals as it gets wrapped around them, inhibiting their ability to feed or breathe and often killing them.

“The gravity of the situation set in when I dived for measurements in March and discovered severe mortality in corals,” Özalp said, naming gold coral (Savalia savaglia) and the violescent sea-whip (Paramuricea clavata) as the most affected species. He warned that if the sea snot were to persist, invertebrate life at the bottom of the Sea of Marmara would be under severe threat.

When the mucus eventually reached the shoreline in the following months, it also started to threaten the breeding ground of fish.

“Once the mucilage covers the coasts, it limits the interaction between water and the atmosphere,” said Dr Mustafa Sarı, the dean of Bandırma Onyedi Eylül University’s maritime faculty, who is leading a study into the economic effects of the sea snot.

It further depleted oxygen during decomposition, essentially sucking air out of the area, Sarı explained. He also noted that thousands of fish started dying a few weeks ago in Bandırma, a coastal town on the southern banks of the Marmara.

Scientists are calling for urgent action to reduce wastewater pressures on the Sea of Marmara in order to diminish nutrients.

“The main trigger is warming related to climate change, as phytoplankton grow during higher temperatures,” said Özdelice, noting that the seawater had warmed by 2-3C since preindustrial times. But since countering climate change requires a global and concerted effort, she urged Turkey to focus on factors it could control: overfishing and waste water discharges.

“This is also an outcome of overfishing because as filter feeders which consume phytoplankton are excessively hunted, it allows room for [phytoplankton and sea snot] to breed,” she said.

Even before the added pressure of climate change, the semi-enclosed Sea of Marmara could barely shoulder the burden of the densely populated and industrialised Marmara basin, Sarı said. “But as temperatures rise, the sea reacts in a completely different manner.

“We are experiencing the visible effects of climate change, and adaptation requires an overhaul of our habitual practices. We must initiate a full-scale effort to adapt.”