Turkey’s dilemma: whose side is Erdogan on? – The Spectator 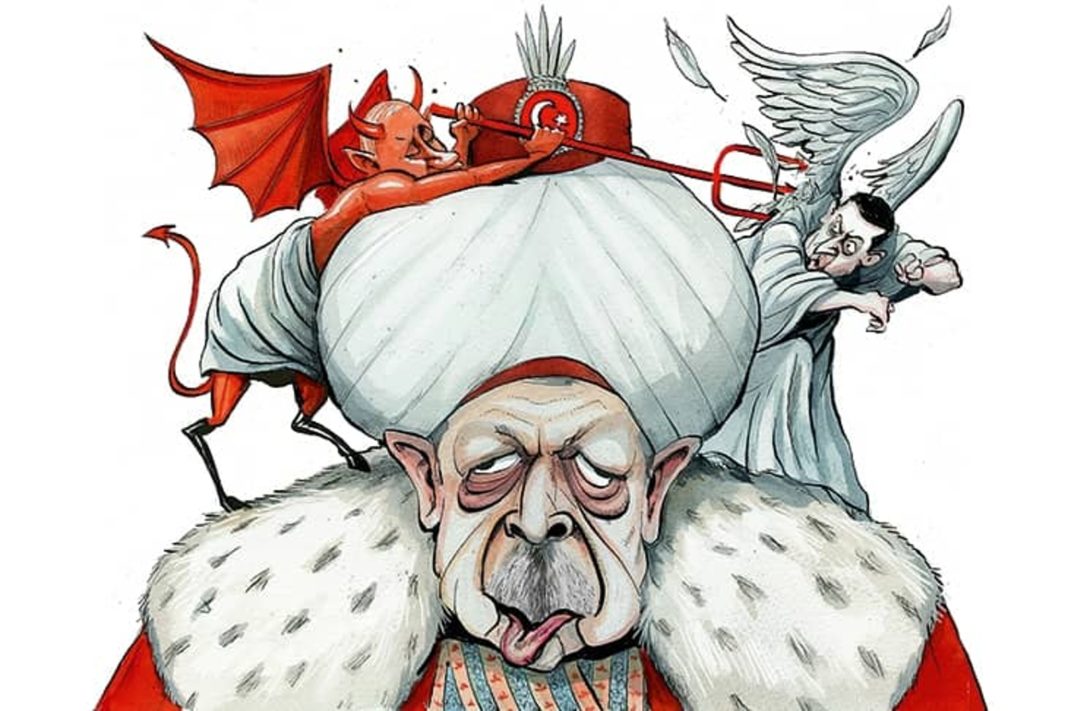 « Vladimir Putin’s ill-conceived blitzkrieg in Ukraine has failed thanks, first and foremost, to the guts of Ukrainian soldiers and civilians. British and US-supplied anti-tank weapons have played a crucial role, too. But it’s Ukraine’s Turkish–made TB2 Bayraktar drones that have been the war’s most unexpectedly effective weapon. Unexpected not just because of their battlefield killing power but because the father-in-law of the TB2’s inventor and manufacturer is Recep Tayyip Erdogan – the only European leader to have once described himself as a friend of Vladimir Putin » reports Owen Matthews in The Spectator.

Erdogan, with a foot in the East and West, has emerged as the war’s key power-broker – and his loyalty is being actively courted by both Moscow and Washington. At this week’s Nato summit, the US will seek to persuade Turkey’s strongman leader to give the Russian-made S400 air defence system – bought from Putin in 2017 – to Ukraine. In exchange, Turkey would receive US patriot missiles and return to America’s F-35 fighter programme from which they were excluded as punishment for the S400 deal. Though likely to be a step too far for the Turks, the idea has already been floated in Ankara by US deputy secretary of state Wendy Sherman. After years of friction between Erdogan and his Nato allies over everything from Turkey’s military ties to Russia, the refugee crisis and Syria, Washington now badly needs to reunite the Nato family against Russia.

So far, Erdogan has hedged his strategic bets. Ankara has not joined in Washington- and Brussels-led economic sanctions on Putin, and Turkish airspace remains open to Russian traffic. At the same time, however, Erdogan has invoked the 1936 Montreux Convention that allows Turkey to close the Bosphorus and the Dardanelles Strait to Russian battleships ‘in time of war’, which has eased Nato concerns about where Turkey’s real loyalties lie. The Turkish foreign minister Mevlut Cavusoglu has described the conflict as a ‘war’ – contradicting the Russian narrative – and Erdogan himself called the Russian invasion ‘unacceptable’.

Yet throughout the crisis Erdogan has been speaking regularly to Putin, to Ukraine’s embattled President Volodymyr Zelensky and to the Belarusian President Alexander Lukashenko, too. Erdogan’s spokesman Ibrahim Kalin spoke of a ‘network of trust’ with Russia that ‘must absolutely be kept open for diplomacy to succeed’. Despite the closure of the Strait, Kalin pointed out that Turkey remains Moscow’s only reliable counterpart to talk to the West because Putin had ‘burned his bridges’ with all other possible interlocutors. And he’s right. With the West standing firmly behind Zelensky, and China’s Xi Jinping offering cautious diplomatic support to Putin, there is nobody left but Erdogan to act as a serious intermediary. As a result, the southern Turkish resort of Antalya has become the venue for key talks between Russia’s foreign minister Sergei Lavrov, his Ukrainian counterpart Dmytro Kuleba and Turkey’s Cavusoglu.He is in a great hurry to patch up the conflict between two of his most important trading partners

The role of middleman – if Erdogan can sustain the balancing act in the face of Putin’s intransigence – is crucial to his own political survival. Russian visitors are a mainstay of Turkey’s tourism industry, which before Covid accounted for 13 per cent of the country’s GDP. Much of the new construction in Moscow over the oil boom years that have coincided with most of Putin’s rule has been built by Turkish contractors. Erdogan strongly encouraged the building of two enormously expensive Russian gas pipelines under the Black Sea that supply 30 per cent of Turkey’s energy. Russia’s Rosatom nuclear energy agency has been contracted to build four reactors at Akkuyu in Mersin Province, the first of which is due to come online next year. There is even a half-sized replica of Red Square’s St Basil’s Cathedral in a resort in Antalya.

Unlike Putin, Erdogan has to face real, contested elections next year. To win them he has to avoid a cratering economy. The 40 per cent crash in the value of the Russian ruble in the wake of devastating sanctions will hit Turkey hard, across the tourist sectors, the collapse of the Russian construction industry and its ability to buy agricultural produce. The incomes and savings of ordinary Turks have already been eaten away by 38 per cent inflation this year. This will become worse if and when world energy prices spike. Erdogan simply cannot afford, in the most literal sense, to make an enemy of Putin.

Temperamentally and ideologically, too, Erdogan and Putin are very similar men who should be the best of friends. Both have held on to power for two decades by cracking down on the free press, breaking oligarch businessmen who oppose them, jailing thousands of political opponents and using tame media to build up a cult of personality. Both have deep complexes about their nations’ lost empires, and both use imperial history as a justification for their foreign policy. Washington’s hegemony is their common bogeyman, and they share paranoid theories about western capitalism and foreign agents attempting to undermine their rule.

Despite all the following strategic winds pushing the two autocrats of Europe’s eastern flank together, Erdogan today sits on the fence because Putin has failed to make him a true ally. The first major squall was Putin’s 2014 annexation of Crimea, which has a sizable Crimean Tatar population in which Erdogan had a proprietorial ethno-nationalist interest. Erdogan roundly condemned the ‘invasion’ and slammed Putin for trampling on Tatar rights. Then came Syria, where the Kremlin sent a strategically decisive squadron of warplanes in 2015. Putin was happy to help Bashar al-Assad’s forces take on US-backed Kurdish forces – perennial enemies of the Turkish state. But then Russian planes bombed Syrian Turkmen forces allied to Ankara, and in February 2020 hit a convoy of Turkish soldiers near the village of Balyun in southern Idlib. A year later Russian planes bombed areas under the control of the Turkish-allied National Army factions around Afrin, just before a chilly summit between Putin and Erdogan in Sochi, Russia.

While Moscow and Ankara swapped accusations over Tatar rights and Syrian bombings, Turkish businessmen built ties with Ukraine. Most fatefully, a 42-year-old MIT engineering graduate, Selcuk Bayraktar – who happens to be married to Erdogan’s younger daughter – sold dozens of his company’s TB2 drones to the Kyiv government. The propeller-driven drones are relatively cheap (at $1 million, they are 40 times cheaper than an American Reaper), stay in the air for 24 hours and fly low and slow at 70 knots, an operational advantage. Skilful Ukrainian operators have used their Bayraktars to devastating effect against Russian armour. And just days before the Russian invasion, Erdogan signed a free-trade agreement with Ukraine.

Erdogan needs the West just as much as he needs Russia. For decades he has been trying to make Turkey an energy hub between the Middle East, Central Asia, Russia and southern Europe. Most recently he has been cultivating the Israelis about a pipeline linking their considerable offshore reserves to southern Turkey. According to Israeli officials, Turkey has become ‘very cooperative’ with Jerusalem on security matters. Most recently, Turkish intelligence thwarted an Iranian assassination attempt of an Israeli businessman, Yair Geller, and has cracked down on an Iranian covert organisation hatching ‘kidnap plots’ against Iranian dissidents in Turkey.

Unlike Putin, who has succeeded in radically alienating almost every neighbour and former Soviet ally with the exception of Belarus and Syria, Erdogan has proved a past master at playing his friends off against each other. And in recent weeks Erdogan’s delicate balancing act between Washington, Moscow and Kyiv has paid off – not just for Turkey but for Russia too. Putin is looking for an urgent face-saving solution – and it’s his old Turkish frenemy who could provide it.

Instead of the planned lightning strike, Putin’s forces have become bogged down, leading to the abandonment of his hinted-at strategic objective of decapitating the Kyiv government and dismembering the Ukrainian state. The Kremlin’s demands at the last Antalya meeting were strikingly modest in comparison – settling for Ukraine agreeing not to join Nato, agreeing to cap its military and conceding some territory in the east. Though those demands will be painful, a ceasefire deal suits the Ukrainians too. Despite a heroic resistance, they cannot hope to win a war against superior Russian forces. Their best option is not to lose – and impose a bloody stalemate on Moscow.

There is another pressing reason for Erdogan to solve the Ukraine crisis: refugees. Tens of thousands of middle-class Russians have poured into Istanbul and Antalya in the weeks following Putin’s invasion, some fleeing from arrests and persecution but most escaping from economic collapse. Turkey is one of the very few countries to which Russians can travel without visas – and one of the few destinations still flying to Moscow. It is not the educated, relatively prosperous new White Russians that have Turkey worried, but the prospect of influxes of refugees from the Middle East. Russia and Ukraine are both major grain exporters to the region and the world. The war threatens to disrupt that vital food supply, triggering soaring prices and a new wave of hunger-driven emigration from Iraq and Syria.

In short, Erdogan is in a great hurry to patch up the conflict between two of his most important trading partners – perhaps too much in a hurry for Washington’s taste. US President Joe Biden along with most leading members of Nato, cannot allow Putin to appear to win this war. Many western spooks and diplomats have been speaking quietly about regime change being the only way to normalise relations with Russia.

For Putin’s on-again, off-again friends like Xi and Erdogan, on the other hand, Putin is a known quantity – and their political and economic investment in Russia would be severely disrupted by anything like a chaotic collapse of his regime. With Zelensky already effectively conceding that Ukrainian membership of Nato is off the table, Erdogan will be backing a solution that saves Putin’s face. That will put him on a collision course with his Nato allies and potentially cause problems with his new friends in Israel. But that is a debate for the future. For the time being, Ukraine, as so often in the centuries-long conflict between the Ottoman and Russian empires and the old Great Powers of Europe, finds itself caught in a strategic game of thrones over which it has little say.