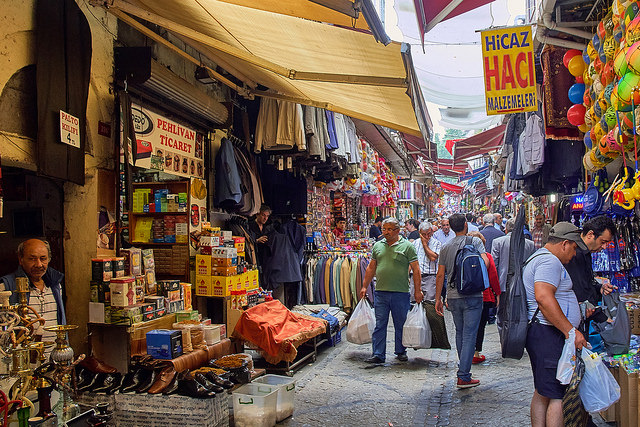 Turkey’s current account registered a $2.7 billion deficit in April and the gap reached $21.1 billion in the first four months of the year, according to central bank data released Monday, reflecting the growing side effects of President Recep Tayyip Erdogan’s focus on promoting growth despite runaway inflation. Turkey, many observers fear, might face a formidable tangle of risks by the end of the year should Ankara’s policy remain unchanged and continue to produce similar current account gaps in the coming months.

The widening deficit stems mainly from growing imports, including an energy bill that has swelled to up to $8 billion per month amid global price increases atop the severe depreciation of the Turkish lira. In April, Turkey’s exports were worth some $23 billion, in addition to a net revenue of $1.5 billion from tourism and other hard-currency service revenues, the total of which fell short of covering the $28 billion imports.

As in previous months, the imports were driven not only by the growth momentum but also stockpiling by economic actors mistrustful and apprehensive of Ankara’s economic policies. Wary of the government’s continued failure to stop the fall of the lira as well as rising global commodity prices, many enterprises have been reportedly stocking up on imported raw materials, semi-products, machinery and equipment to avoid even higher costs down the road.

According to Trade Ministry data, imports increased 41% from the previous month to reach nearly $30 billion in May, while exports stood at only $19 billion, resulting in a foreign trade deficit of some $11 billion last month. Judging by those leading indicators, the current account deficit is likely to have widened to about $30 billion in the first five months of the year.

Despite growing inflationary risks, Erdogan has pursued a growth-oriented economic policy since 2018 and pushed the fight against inflation to the backburner. Armed with sweeping powers since Turkey transitioned to an executive presidency system in 2018, he is now focused on the next presidential and parliamentary polls, due in June 2023 at the latest, and believes that a growing economy is the best way to maintain popular support.

Yet foreign direct and portfolio investments have declined in Turkey since 2018, depriving the country of crucial funds to finance its chronic current account gaps while the economy grows. The government’s obstinate promotion of growth has stoked imports and thus the demand for foreign exchange, adding to the weakness of the lira. The foreign exchange demand has been fueled also by short-term external debt liabilities as well as a flight from the lira at home to shield savings from the inflation storm.

In 2019 and the pandemic-hit 2020, Turkey’s growth rate remained below 2% before jumping to a whopping 11% in 2021. The growth momentum has continued, with gross domestic product (GDP) expanding 7.3% in the first quarter of the year. Much of that growth was driven by pent-up demand after the lifting of pandemic restrictions and then a rush to buy and stoke up on goods before the galloping inflation erodes further the value of the lira. And while the wheels of the economy have continued to turn, the cost of imports required to sustain production has grown. As a result, the country’s current account deficit — or foreign exchange deficit — has widened, most notably since the last quarter of 2021. The 12-month cumulative deficit reached about $26 billion in April.

A deficit of such a size would have been a lesser worry had Turkey attracted ample foreign investments as it did in earlier years under Erdogan. In 2011, for instance, the current account deficit hit a record $74 billion, amounting to 9% of GDP, but Turkey was able to finance it thanks to the inflow of foreign funds, with the lira losing only about 11% of its value against the dollar that year.

Foreign investments have slowed since 2013 under the impact of global financial trends, coupled with Turkey’s deepening economic fragilities. As a result, the financing of the current account deficit now comes at the expense of sharp depreciations of the lira. Only $5 billion in foreign funds helped cover the $21.1 billion gap in the first four months of the year, while the country burned through $4.4 billion in dollar reserves. There was also an inflow of $11.7 billion in foreign exchange of unknown sources, which appear in the “net error and deficit” section of the balance of payments. The lira, meanwhile, lost 8% of its value versus the dollar from January to April despite all of Ankara’s interventions to prop it up, using borrowed foreign exchange.

Atop the growing current account gap, the country is burdened with $181 billion external debt repayments in the next 12 months — another factor pushing the demand for and prices of foreign exchange up.

Since the currency turmoil in December, the locals’ rush for hard currency has receded and the demand now stems mainly from importation and external debt liabilities. The lira, which traded in the region of 15 versus the dollar in May, plunged past 17 in early June. The price of the dollar reaching 18 liras before long would not be a surprise.

The gravest consequence of rising foreign exchange prices is their immediate impact on production costs via imports, chief among them energy imports. Turkey’s annual consumer inflation soared to 73.5% in May, threatening to top 100% in the coming months.

In a fresh bid to make lira savings more attractive, the Treasury and Finance Ministry last week announced a new type of domestic bonds for retail investors, indexed to the revenues of the state airport and coastal safety authorities. The bonds, presented also as a measure to tackle inflation, quickly led to disappointment given their prospective yields. The combined budget revenues from the airport and coastal safety authorities are projected at 874 million ($50.6 million) liras this year. Accordingly, the bonds will have a three-month yield of 5.3% and an annual yield of 23% per a ministry statement. Such rates are unlikely to attract much interest at a time when consumer inflation is headed for a three-digit figure.