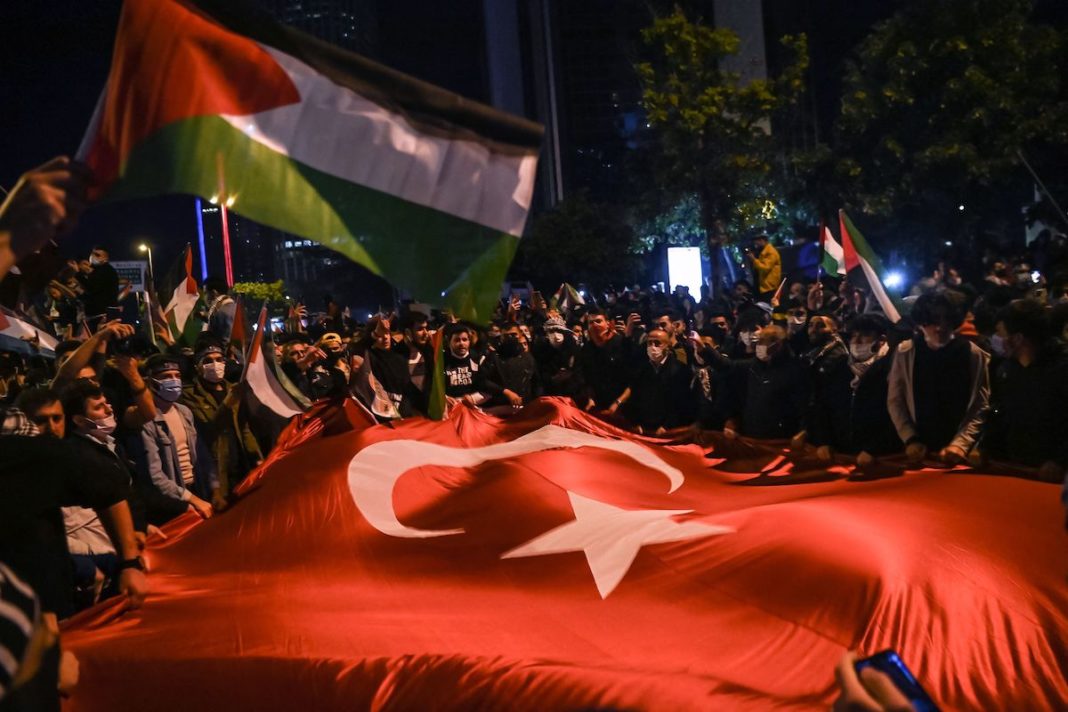 Ankara sees a recently ratified security cooperation deal between Turkey and the Palestinian Authority as groundwork for a possible maritime boundary agreement between Turkey and Palestine. Experts see such prospects as far-fetched.

As the Holy Land emerges from a fresh round of clashes, Turkey has ratified a comprehensive cooperation agreement with the Palestinian administration that was signed in 2018. While Turkish media is trumpeting the agreement as an “important step,” experts believe the deal will have limited practical meaning.

In addition to its showy name — the Security Cooperation Agreement between the Government of the Republic of Turkey and the Government of the State of Palestine — the content of the agreement, which came into effect on June 3, is quite vast and involves cooperation in combating terrorism, drug trafficking, human trafficking, illegal immigration and money laundering; the illegal trade of historic artifacts, weapons, ammunition, explosives, and nuclear, biological, chemical, and radioactive materials; and forgery of official documents, cybercrimes and organized crime.

Under the agreement, Turkey aims to train and support the Palestinian police, gendarmerie and coast guard forces in a bid to prevent terrorist attacks and finance of terrorism through know-how, information and intelligence sharing.

Given the lack of institutional, technical and political groundwork to realize some provisions of the deal, the effectiveness of the agreement remains questionable. Indeed, a report by the Turkish parliament’s foreign affairs committee acknowledges that Ankara has failed to carry the security cooperation with Palestine to the desired levels due to a lack of necessary legal framework.

Legal problems aside, de-facto realities on the ground also stand in the way of the execution of the deal. For instance, any cooperation plan between the two parties’ coast guards seems impossible due to Israel’s full dominance over the Gazan waters. Even ordinary Palestinian fishermen are unable to sail more than 6 miles off the coast. Similarly, almost every activity in the West Bank requires official permission from Israel.

The provisions relating to combating smuggling and illegal trade, meanwhile, stand out as a major irony, as many Palestinians rely on some sort of smuggling to survive, travel and defend themselves under extensive Israeli embargoes and blockades.

Yet apparently, President Recep Tayyip Erdogan’s government is seeking to present the agreement as a key document that “paves the way” for Turkish troops to travel to Palestine for military training.

As the pro-government CNN Turk television’s report puts it, under the agreement, “joint military drills will be conducted. When requested, Turkish troops will be able to travel to Palestine for training purposes.”

Although the Palestinian Authority (PA) has no say in Gaza, East Jerusalem is under Israeli control and Palestine has non-member status in the United Nations, in Turkey’s official mindset, these are not obstacles to signing international treaties with Palestine. Despite that some agreements have no practical meaning on the ground, Turkey is seeking to strengthen the visibility of Palestinian statehood through these agreements.

Describing the agreement as a “new leaf” in ties between the two parties, Turkey’s Deputy Foreign Minister Yavuz Selim Kiran said the agreement aims to “lay the groundwork for the strengthening of the institutional capacity of the State of Palestine.”

Speaking to the government mouthpiece Daily Sabah, he said Turkey solely mobilized the international community in the face of recent clashes between Palestinians and Israelis. According to Kiran, “The need for international protection for the Palestinian people has been taken on the record” through Ankara’s efforts including the latest deal.

Yet his remarks stand in contrast to what he had said to the Turkish parliament’s Foreign Affairs Committee at the time of discussions over the agreement. Back then, Kiran said Palestinian security forces will not be trained against Israel, but the agreement rather “aims to strengthen the institutional capacity of Palestinian security authorities.”

In the past, Turkey made three separate cooperation deals with the PA in several fields including security cooperation, taxation, agriculture, communication and information technologies, and civil defense. The Palestinian police force has been receiving training at Ankara’s police academy for years.

Tahrawi believes although the agreement is remarkable in terms of equipment and training plans for the Palestinian forces, “The Palestine side is lacking institutions that will execute the agreement.”

“First of all, Israel is the greatest obstacle. [Palestinian leader Mahmoud] Abbas’ police cannot even travel to Turkey without permission of Israel,” he told Al-Monitor.

Furthermore, whether training programs in the agreement would include the forces in Gaza, which is under the control of Hamas, remains a question, Tahrawi added.

According to Tahrawi, the fuss in Turkey around the agreement is related to Ankara’s plan to make a maritime deal with Palestine, a similar deal it struck with Libya’s Government of National Accord (GNA) back in 2019.

“Turkey is in preparation for the future” in a bid to reach a maritime deal with Palestine “before Greece and Cyprus do,” Tahrawi argued.

“Yet the major obstacle here is Israel, not Palestine. We have only a 45-kilometer-long coastline in Gaza. Palestinians are able to sail just a few miles,” Tahrawi added. “It’s impossible to realize such plans without Israel’s permission.”

Turkish media also echoed the intention with staunchly pro-government A Haber television, for instance, painting the deal as “a milestone” before a possible maritime deal between the two sides.

In parallel, days after the ratification, Cihat Yayci, a retired admiral who is credited as an architect of the controversial maritime deal with Libya, shared a draft maritime agreement he prepared for Palestine.

According to Aydin Sezer, a Turkish foreign policy analyst and a former bureaucrat who traveled to Palestine in the 1990s for various aid projects, the deal has practically little value at a time the prospect of Palestinian statehood is losing ground.

“These agreements might be useful for Palestine to advance its practice of signing agreements with foreign countries, but they don’t translate into practical outcomes,” Sezer told Al-Monitor.

“Even traveling to the Palestinian port requires passing through a security check in the Israeli waters. … With whom will you implement this agreement in Gaza? The Abbas administration has no credibility anymore,” he said.

Besides, the agreement might be in conflict with several deals Turkey and Israel already signed in the past, Sezer added. Indeed, the security cooperation agreement between Turkey and the PA stresses that the deal will not infringe upon other international agreements both sides made in the past.

On a possible maritime deal between Turkey and Palestine, Sezer thinks the prospect is far-fetched as Palestinians might not be up for it as they “wouldn’t want to confront Cyprus and Greece.”

Sezer also cited several other reasons such a deal seems unviable: First, a possible maritime boundary agreement between Palestine and Turkey will mean the violation of Cyprus’ Exclusive Economic Zone. Second, such a deal will be incompatible with the maritime deal signed between Egypt and Cyprus, which is already recognized by the international community. Last but not least, in 2019, Turkey informed the United Nations of the boundaries of its continental shelf following the controversial maritime deal reached with the Tripoli government in 2019. Turkey cannot take a position that formally deviates from its already declared position over continental shelf boundaries. As such, any maritime boundary agreement between Turkey and Palestine will be subject to international arbitration of which the outcome will highly likely favor the Cyprus-Egypt bloc.