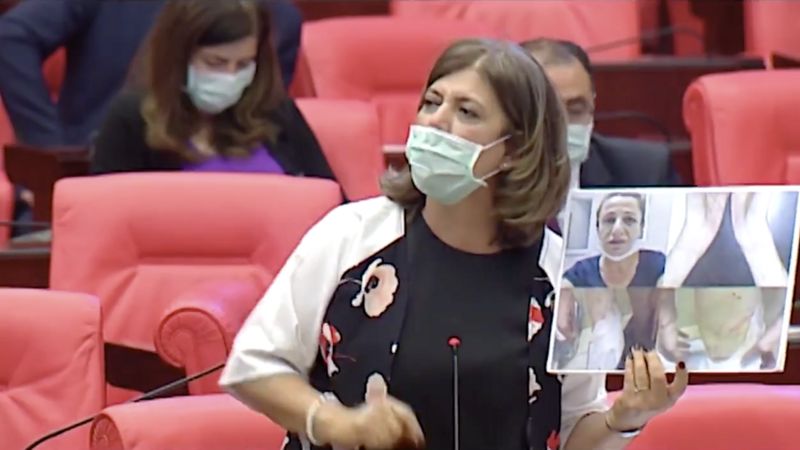 Civic groups and legal experts say reports of abduction and forced disappearances of opposition party members are on the rise, explains Sibel Hurtaş in Al-Monitor.

Members of HDP, Turkey’s third largest opposition party, and leftist organizations say they have increasingly becoming targets of abductions in the past two years. Almost all abductees said they were pressed to inform on their organizations, and some said they were heavily tortured.

On Aug. 25, “Someone held me by the arm on the subway and told me that there was an arrest warrant for me, » Celalettin Yalcin, a member of Turkey’s pro-Kurdish Peoples’ Democratic Party (HDP), told Al-Monitor. « They handcuffed me behind my back and put me in a vehicle. I was taken to a house. They tortured me. They attempted to rape me. … They pressured me to become an informant.”

Yalcin’s apparent abduction in Istanbul is far from the only case over the past years. Five days before Yalcin’s accusation, Alev Sahin, an architect who was sacked from her job due to her opposition to the government, was approached by people who presented themselves as police when she was on her way to a grocery store on foot in Ankara.

According to Sahin, the group wanted to take her to a police station in a black van, citing missing information in her previous police testimony.

Fearing that this might be an abduction attempt, Sahin refused. “I called my lawyers right away and the vehicle drove away,” she said. Sahin’s fear was well-founded. “Black vans” were commonly used vehicles in these cases.

On Aug. 12, Turkish press reported that Ozcan Gokcur, another HDP member, said he was forced into a car by people who presented themselves as “the state” at a bus stop near Istanbul and that he was pressed to become an informant. Gokcur filed a legal complaint about the incident. Last year, two other HDP members, Hatice Busra Kuyun and Lider Polat, said they were also abducted by people who presented themselves as affiliated with the security forces and were held against their wills for several hours.

Following the 2016 coup attempt, dozens of people were reportedly forcibly disappeared by people who presented themselves as members of the Turkish security establishment . Most of the targets have been followers of the Fethullah Gulen movement, which Ankara accuses of masterminding the putsch. Some of the abductees are reportedly still missing. But in more recent years, as well as HDP members, several activists affiliated with Marxist groups were abducted in a similar manner, according to the Human Rights Foundation of Turkey.

On Aug. 6, Devrim Taylan Eryilmaz was reportedly forced into a car in Ankara by three people who presented themselves as police and pressed to inform on the Socialist Party of the Oppressed, a small Marxist group allied with HDP. In January, Gokhan Gunes, a Turkish worker with leftist leanings, was reportedly abducted and tortured by unidentified government agents in a forced disappearance. He returned to his home six days later, and his plight drew much domestic and international attention.

According to the Human Rights Association (IHD), in the first 10 months of 2020, at least 10 people were allegedly abducted, harassed and pressed to be an informant. The exact number of abductions is unknown, as most of the targets are afraid of filing complaints, IHD Istanbul chair Gulseren Yoleri said.

Apart from the harm to the targets, their families and fellow activists, abduction accusations also tend to take a heavy toll on society.

“The person who was abducted suffers from a fear of getting disappeared or killed. [The incidents] create the same fear in the society as well. Other dissidents are also affected by these. This has very dangerous and serious repercussions,” Yoleri told Al-Monitor.

Abduction attempts are mostly targeting young people, according to HDP lawmaker Mehmet Tiryaki. “Since last year, many of our friends have been abducted by unidentified people,” Tiryaki told Al-Monitor. ​“They were taken to remote locations and threatened with death.”

According to Tiryaki, most of the targets were pressured to become informants on the HDP. “Whoever wants to get information on us, they can just ask us, » he said. « We are a party that shares everything … with the public.”

The incidents evoke bitter memories of forced disappearances by Turkish counterterrorism forces in the 1990s, fueling fears that Turkey might be returning to those dark days.

“Abductions were carried out secretly in the 1990s. Today, the crime is being committed brazenly in front of CCTV cameras,” Yalcin said.

Recently, video footage circulated in the Turkish media showing a number of men whisking HDP member Polat away in Istanbul on Aug. 27, 2020. Yet the investigation into his abduction complaint has yielded no results.

Tiryaki said no identification has been made so far in any criminal complaints that HDP has filed about abduction accusations, although “dozens of people have been abducted in Istanbul, Diyarbakir and Ankara. »

Ironically, the only person who has been prosecuted in relation to the incidents was one of the targets. Busra Kuyun, who was reportedly abducted by police in Turkey’s predominantly Kurdish southeast in May, 2020, was indicted by local prosecutors. Prosecutors accused her of inciting hatred and enmity because of her statements after her abduction.

According to Tiryaki, the impunity for perpetrators indicates that the security forces are involved in the incidents. The similarities of the abduction claims suggest they are being used as a systematic tactic.

Despite several questions by opposition lawmakers and journalists no government official has publicly commented on the abduction claims yet.

Yoleri said the IHD has filed criminal complaints for all of the abduction claims, but all of the cases were dropped. A law that shields activities of the Turkish Intelligence Agency (MIT) from prosecution has been a major factor, according to Yoleri.

“When we ask why this has been happening, we run into the MIT law. If the abduction is a MIT activity, then the prosecutor’s office cannot investigate it. »

Sibel Hurtas is an award-winning Turkish journalist who focuses on human rights and judicial and legal affairs. Her career includes 15 years as a reporter for the national newspapers Evrensel, Taraf, Sabah and HaberTurk and the ANKA news agency. She won the Metin Goktepe Journalism Award and the Musa Anter Journalism Award in 2004 and the Turkish Journalists Association’s Merit Award in 2005. In 2013, she published a book on the murders of Christians in Turkey. She is currently editor-in-chief of www.halagazeteciyiz.net and Ankara bureau chief of Artı Tv.