What’s Next for Turkey in Libya After Election of New Interim Leaders ? 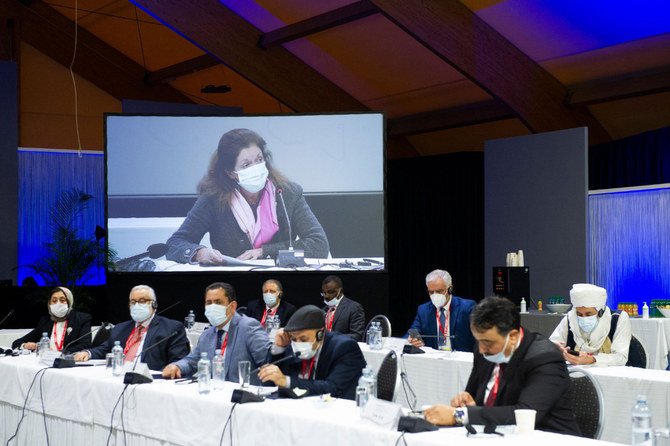 Given Libya’s regional and institutional fragmentation, the new leadership could ill-afford to favor one side and ignore the other. The plan to reunify the country cannot succeed without the cooperation of the eastern camp, which is hostile to Turkey.

Universal goodwill messages to Libya’s new interim leadership indicate how complex the Libyan file has become for all foreign actors in the country ahead of potentially clamorous elections in December, says Fehim Taştekin, Turkish journalist and columnist for Turkey Pulse.

The outcome of the UN-sponsored vote on new interim authorities in conflict-torn Libya seems to preclude any discussion of clear winners and losers, and anyone who believes that it fully safeguards Turkey’s interests might be making a premature conclusion.

A slate including head of the eastern-based parliament Aguila Saleh and Interior Minister of the outgoing Turkish-backed Government of National Accord (GNA) Fathi Bashagha was widely expected to win the Feb. 5 vote at the Libyan Political Dialogue Forum, being an option that reflected the balance of power between the opposing parties on the ground. Egypt and Russia had raised Saleh’s profile as an alternative to eastern warlord Khalifa Hifter, and Saleh’s interim leadership would have been acceptable to Ankara, with Bashagha guaranteeing the protection of Turkish interests as prime minister. Eventually, another group of candidates won the vote, assuming the critical mission of taking Libya to national elections on Dec. 24.

Mohammed al-Menfi and Abdulhamid Dbeibeh, nominated respectively as head of the three-man presidency council and prime minister, have raised no serious concerns among any of the rival parties. Both figures are seen as blank pages that each party hopes to fill in line with its interests.

Everyone, including Ankara, appears happy with the surprise outcome. Ankara is ostensibly free of concern that the new leaders might undermine its military presence in Libya and the deals it has struck with the Tripoli-based GNA, which it backed in the war against the Hifter-led eastern forces.

The candidates for prime minister in all four slates were from Misrata, where Turkish influence is the strongest. This perhaps was the reason why Ankara watched the nomination process quietly, confident it would land on its feet in any case. The elites of Misrata, many of them descendants of Ottoman Turks, are the group on which Ankara relies the most to advance its interests in Libya.

Either way, Menfi is not an objectionable figure for Turkey. He belongs to the Tripoli camp politically and is no fan of Hifter. Dbeibeh, for his part, is an entrepreneur with business ties in Turkey dating back to the Gadhafi era. In his first statement to Turkey’s Anatolia news agency, he pledged “great solidarity with the Turkish people and state” and described Turkey as “our real partner.” Yet he avoided contentious issues, emphasizing mostly economic ties.

According to Yasin Aktay, an adviser to Turkish President Recep Tayyip Erdogan, the new leadership is supportive of Turkey’s role and military presence in Libya as well as the military cooperation and maritime demarcation deals that Ankara signed with Tripoli in 2019. Still, a number of obvious and covert factors stand in the way of concluding that Turkey’s interests are guaranteed in Libya down the road.

Above all, the new leadership is a temporary one. All actors need to gauge the outcome of the Dec. 24 elections.

Second, the interim administration — saddled with the arduous task of reuniting Libya and taking it to elections — is unlikely to prioritize ties with Turkey at the expense of disturbing the process. Dbeibeh is already facing Turkish calls to clarify his position on the deals with Turkey.

Given Libya’s regional and institutional fragmentation, the new leadership could ill-afford to favor one side and ignore the other. The plan to reunify the country cannot succeed without the cooperation of the eastern camp, which is hostile to Turkey. Hence, the parties might choose to leave the final say on Turkey’s military presence and the deals with Turkey to the parliament and government that will emerge from the elections.

Intriguingly, Hifter played a role in the victory of the Menfi-Dbeibeh group. According to The Arab Weekly, Dbeibeh met with Hifter ahead of the vote, and Hifter’s representatives eventually voted for him.

Turkey’s condition for the settlement process was that Hifter should be excluded from the negotiations, which was also why it had acquiesced to the Saleh option advanced by Russia and Egypt. But now, after Saleh’s failure to be elected, they will have to deal more with Hifter on matters concerning the eastern camp.

Jalel Harchaoui, a Libya expert at the Clingendael Institute in The Hague, told Al-Monitor that Saleh was expected to possess the ability to speak with the military wing, tribes and elites in the east as well as Egypt, Russia and the Gulf bloc, while Menfi, having lived in Tripoli, wields much less clout in that regard for the time being. Harchaoui believes this will bolster Hifter’s profile in the east again. According to the expert, Hifter holds two important cards to threaten and pressure Tripoli for concessions: the separatist rhetoric and control of the oil valves.

The House of Representatives, torn between Tobruk and Tripoli, is another platform where the east-west balance has to be observed to ensure a smooth transition. The Saleh-led parliament is the authority that should confirm the new government. The deadlock there could be overcome based on the vote at the Libya Political Dialogue Forum, which the UN sees as a back-up mechanism, but that would undermine the goal of reuniting Libyan institutions. The parliament needs to become functional to work on legislative matters such as a new constitution and a new election law. Yet Tripoli-based deputies want to unseat Saleh who, in turn, is keen on preserving his post and influence. His first condition for confirming Dbeibeh’s Cabinet is that it should be based in Sirte. Arm wrestling on this issue could derail the process.

Another important point is that Hifter’s foreign backers have come to follow a new approach that transcends the east-west divide. French President Emmanuel Macron has congratulated Menfi and invited him to Paris. Russian Foreign Minister Sergey Lavrov has called Menfi and Dbeibeh, pledging cooperation. Egyptian President Abdel Fattah al-Sisi — who opened channels with Tripoli after his cease-fire initiative in August, hosted some UN-sponsored talks and sent a delegation to Tripoli last month — has declared his readiness to work with the new administration. The Emirati crown prince, Hifter’s unshakable supporter, has also made a congratulatory call to Menfi.

In other words, Turkey’s rivals in Libya are gradually repositioning themselves in a bid to gain influence over Tripoli. The cease-fire line may be drawn at Sirte and al-Jufra, but the political frontlines are now moving to Tripoli, meaning that Turkey’s coordination of its already sparring partners there will become even more difficult.

Meanwhile, neither Turkey’s allies nor their eastern opponents appear ready to forfeit their foreign backers. Eventually, both sides might refrain from pushing for the withdrawal of foreign forces as the Oct. 23 cease-fire deal requires.

According to Harchaoui, even if an anti-Turkey easterner gets a seat in the new government and says “Turkey should withdraw,” this will not make a big impact on Turkey’s mission. Likewise, he believes, Russia will keep some Wagner Group presence in central Libya while discussing economic deals with Tripoli. Egypt will also play a double game with Tripoli, though with less leverage, until a new equilibrium is found.

For Erdogan, fending off calls for Turkey’s withdrawal is easy. “There are fighters from Chad, Mali and [the Wagner Group] over there. You pull them out first and then we can talk,” he said Feb. 9 in response to Macron’s call for Turkey to leave Libya.

Meanwhile, the eastern forces will have a say also in the redistribution of posts in key bodies such as the central bank as part of efforts to reunify institutions. Harchaoui believes an easterner might end up heading the central bank.

In sum, anyone who sees the outcome of the Feb. 5 vote as fully favorable to Turkey is simply ignoring that Hifter’s countermove has been on the mark, no matter how hard Ankara has tried to shut him out. The universal messages of support for the new leadership indicate that the Libyan issue has grown more complicated for everyone. None of the local and foreign actors is willing to undermine the process and become a fall guy. The trump cards are currently on hold. Such an extraordinary “maturity” might be a clue of how clamorous the scene will become after the Dec. 24 elections.

Share
Facebook
Twitter
Pinterest
WhatsApp
Previous articleAnakara Fails to Notice the determination of the Biden Administration : New page for US , Turkey Reads Like Phantasy
Next article‘ Why Turkey Wants To See a Revival of the Iran Nuclear Deal ? ’ by DR Hamidreza Azizi , Research Fellow At The German Institute For International And Security Affairs