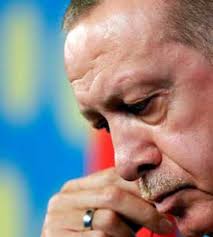 Journalist Yavuz Baydar questions on November 21 in Ahval the meaning of Erdogan’s last “turn”: “We don’t see ourselves elsewhere but in Europe.”

“He is back at it again. Full of his customary surprises at each and every turn, Turkish President Recep Tayyip Erdoğan displayed a sharp swing on Saturday, refreshing his long-lost love for his favourite punching bag, the EU.

“We don’t see ourselves elsewhere but in Europe. We envisage building our future together with Europe,” in online speech at a local ruling Justice and Development Party (AKP) meeting. “We expect the EU to keep its promises, not to discriminate against us or at least not to become a tool to open enmities targeting our country.”

Reactions to his remarks included perplexity. Many however, were rational, as if the Turkish president had broken a pattern of consistency, taking a unique curve. Given his now usual record of zigzags, one had no choice but to be amazed at observers showing amazement.

For the record, we are talking about the same person who, at the end of October, had raged at two top EU figures, French President Emmanuel Macron and German Chancellor Merkel, with his well-known slurs.

Furious over Macron’s statements on the battle against radical Islam and the police raid at a mosque over an embezzlement case in Berlin, Erdoğan was on fire, calling for a national boycott of French goods.

In a speech on Oct. 26, he roared: “I address Chancellor Merkel, is it so that you have freedom? Nearly 100 policemen assault a mosque! You are, in the proper meaning of the word, fascists! You all are, in real terms, part of the Nazi chain!”

These words, which are bordering hate speech, have become an integral part of Erdoğan’s image in the West for some time now. And they are often met with aloof shrugs.

But, beyond that, there is another component in how he is perceived among these circles and various layers of Europe lately. And that is of being the persistent figure emboldening, one way or another, Islamists resorting to unlimited violence against civilians.

Erdoğan’s lack of issuing condolences in the aftermath of Islamist beheadings in France and the mass shooting in Vienna cement this perception as a political counterpart marked by unreliability and unpredictability. Aloofness to his words aside, the recent stiffening in Europe regarding radical Islamist groups linked to some mosques and hate crime oriented Turkish ultra-nationalist group, Grey Wolves, should not have come as a surprise. For all this, along with his political ally Devlet Bahçeli and his sycophants, Erdoğan has himself to blame, nobody else.

Yet, the question remains: What is the Erdoğan’s aim with his sudden EU u-turn and willingness to embrace his European foes?

Could it be that he is so detached from reality that he hopes this fresh step may not be perceived as an insult to the intelligence of top EU figures he has frustrated for so long?  It is worth noting that there is both an old and fresh element in his slalom. Erdoğan knows that the EU is an internal battlefield, carved by rigid divisions, placing members like Hungary, Bulgaria and Poland as challenging its foundational values. He also knows that for mainly financial reasons, Italy and Spain are “extremely reluctant” for unified action against Turkey. And he relies on the diplomatic acrobatics of Merkel, whose appeasing choreography allowed Turkey to enforce its “offensive” foreign policy in the eastern Mediterranean.

It is with his “rediscovered love” for the EU that Erdoğan calculates coldly that France and Greece’s decisive moves to abolish the Customs Union and sanctions will hit a wall of vetoes and disunity. Moreover, he relies on the fact that as long as U.S. President Donald Trump delays his transition, by keeping a lethal void in international politics, it will be the EU, which may act as a lame duck, as well.

Then there is the fresh element, which connects Erdoğan’s cunning act with a tangible degree of despair. Bruised badly by the economic crisis, Turkey’s strongman is demonstrating apparent weaknesses as of late. He had to appoint a new director for the Central Bank, which raised the rates, while seeing his son-in-law and Finance Minister Berat Albayrak, step out under dramatic circumstances. This means that the rift within his increasingly decaying administration has landed on the doorsteps of his family, and the very palace. This troubling development was coupled by a new episode, involving mafia figures – led by a convicted chief of a Grey Wolf-linked crime ring, Alaattin Çakıcı, openly threatening the leader of the main opposition, Kemal Kılıçdaroğlu.

The messages stemming from Çakıcı and his “good friend” Bahçeli – the leader of the ultra nationalist MHP – also displays staunch resistance to signals Erdoğan announced about a “legal reform”. It indicates a potential crack within the power alliance, which Erdoğan and Bahçeli stand for. It speaks volumes that Erdoğan has remained silence over the row. Sources we have been in touch with leave little doubt that Erdoğan is cut off from reality: He had been shocked to hear that economy had hit rock bottom.

Our sources raise another issue: It is a huge question mark whether or not the so-called “Blue Homeland” doctrine – the endeavour to establish Turkish naval supremacy in the eastern Mediterranean – and the related actions based on it; Turkey’s active military engagement on the side of Azerbaijan in  the Karabakh war and the recent intervention in the North Cyprus elections are all his making. But it seems the other way around, it is suggested, that the MHP flank of the power structure and the ex-officers backing the administration successfully impose an irredentist agenda, which Erdoğan finds to his own personal advantage to stay in power. But if so, this turns him into a “spokesperson” and only a “symbol” for the rule he has built, a figure kept erect currently with the help of  Ibrahim Kalın and Ömer Çelik , his closest, most trusted aides, and Hulusi Akar, the Minister of Defence.

It is no surprise that rumours as of late suggest Bahçeli, who “ensnared” Erdoğan into a corner, is the “shadow leader” of Turkey. The overall picture should not mislead anyone. The past five years have seen an emergence of, not to say a “rogue state”, but a structure as aptly suggested by the distinguished French-Kurdish scholar, Hamit Bozarslan, a “cartel state” in Ankara.

A power formation that assembles corrupt, often unlawful interest groups, under Erdoğan and Bahçeli, but now openly sabre rattling against each other. This showdown just may be the one Erdoğan feels unable to handle. These two elements can help explain Erdoğan’s olive branch.

It is rational to assume that Kalın as Erdoğan’s trustee may have indicated to his EU counterparts in his visit to Brussels on Friday, “my boss is in trouble, and he needs help, or else”. A scenario, which scares EU figures, is not only the refugee influx, but also what may happen if Erdoğan is no longer in power, replaced by even more severe adventurists.

If at a “watershed moment”, as Josep Borrell repeated the other day about Turkish-EU relations, how will Erdoğan’s 180 degree turn impact the EU stand on the upcoming summit on Dec.10? As uneasy as he is at the moment about Bahçeli and Eurasianist flank at home, Erdoğan correctly fears a clash with U.S. president-elect Biden. He is aware that the posturing of the EU, however, will help him to approach the latter with sufficient diplomatic emboldenment. This “watershed” therefore shows how responsibly and based on values the EU will be able to handle what many within the bloc see as “the Erdoğan problem.”

“Turkey is free to chart an entirely new course for itself, but EU leaders have a duty to defend their values and interests,” wrote Marc Pierini, a seasoned EU diplomat, recently. “Turning a blind eye or playing down what Turkey’s leadership is doing to its country and to its policies toward the EU and NATO creates a strategic risk for European governments. Leniency is not an option anymore.”

These are wise words. Indeed, this will be an existential moment for the EU: Turkey should be left free to choose its course, because no appeasement will help it to reverse to normalisation to rule of law anyhow. And if “leniency” is the choice, it may very well be a vote – a carte blanche – for further destabilisation in the region, where the “cartel state” harbours extremely offensive ambitions.

One last word, to those who may counter-argue that the EU itself is partly at blame for this impasse. This argument has no basis. It was not the EU, which suggested to Erdoğan to imprison tens of thousands of people, dismantle the rule of law, and amend the constitution to build an autocratic order. Whoever breaks the vase, is bound to own and repair it.

So, Erdoğan knows what to do: Reestablish the rule of law, declare condition-free general amnesty, restart a peace process with the Kurds and lastly sit at the negotiation table with the Greeks.”