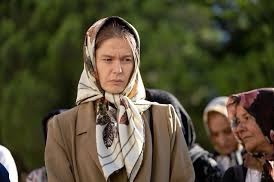 Male violence and impunity have reached such a level in Turkey that one would have to be completely insensitive to the severity of the issue to begin hand-wringing about whether or not violent self-defense is warranted. In the midst of this political, systematic, and utterly preventable violence against women, what Netflix’s latest Turkish series “Fatma” offers is a merely individual solution.

In Netflix’s latest Turkish series “Fatma,” men constantly ask the titular character why she is sticking her nose in business that doesn’t concern her. “What are you going to do, all by yourself as a woman?” There is perhaps no easier way to translate the common sexist phrase “kadın başına.” It is used to put women in their place, to remind them there are things society will let them do (get married, be mothers, look after their home) and not let them do (enter male spaces, deal with the authorities, talk back, be assertive).

Yet the series reveals that Fatma (played by Burcu Biricik) doesn’t need a male protector to get things done. In her quest for revenge, she enters the most macho space there is: the criminal underworld. She makes herself heard and when mafia men try to block her path, she can even kill.

The series (created and directed by Özgür Önürme and Özer Feyzioğlu) starts with a flash-forward of Fatma in a police interrogation room in Istanbul. The male cop shows her photographs of men who have recently been murdered. “What business do you have with these men?” Her answer: “House-cleaning.” This is the truth. Before Fatma begins “cleaning the house” in a more metaphorical sense, through violence, she is a literal cleaning lady. After her husband Zafer goes missing, she asks for help from Bayram, one of the men whose office she cleans. Before disappearing, Zafer had been mixed up with this mafia guy. Bayram doesn’t take Fatma seriously but gives her the address of someone to whom Zafer owed money. On her way out of the office, Fatma slips Bayram’s gun into her purse. Just in case.

So begins Fatma’s accidental murder spree. As she tries to get information about her missing husband from these mafia types, she is insulted, intimidated, and threatened. Fatma is triggered by these men. They remind her of sexual violence she experienced as a child in her home village. Retraumatized in these moments, she begins to kill. Eventually, the mobster Bayram from whom she stole the gun catches onto what Fatma is doing. He watches with astonishment as she calmly leaves the crime scene undetected. “You’re invisible,” he tells her. With her headscarf, downcast scare, slouching posture, and cleaning supplies, it is not only that the cops don’t see her as a suspect: they don’t see her at all. As a working-class, ostensibly conservative woman, she simply doesn’t exist in the eyes of the male world. Bayram tries to intimidate Fatma into being his hired killer, but she proves to be uncontrollable. She keeps killing, but for her own reasons.

On the surface, the series resembles last winter’s smash hit “Bir Başkadır”/“Ethos.” We have a poor woman who lives in a slum neighborhood of Istanbul coming into the houses of the rich and/or powerful to clean. We see an entire panorama of Istanbul that lays out class and cultural differences. Yet Fatma is more of a thriller compared to the meditative arthouse approach of “Bir Başkadır.” The viewer is on the edge of their seat wondering if Fatma will escape the scene of the crime or whether the cops will finally catch up with her.

“Fatma” is also something of a political series. However, because the message is more on the surface its flaws are also more obvious. In this time of epidemic levels of violence against women, the series strikes a nerve. What we have here is a woman who has been raped, abused, and insulted for much of her life. Eventually, she reaches a breaking point and decides to take matters into her own hands. The victim becomes the killer. In some ways, “Fatma” resembles the genre of the rape-revenge film, from the 1970s classic “I Spit On Your Grave” to last year’s “Promising Young Woman.” Whether or not these films are actually feminist has been a long and important debate. In the Turkish context, “Fatma” also shares something with the 2008 series “Şahsiyet,” in which a woman police officer (played by Cansu Dere) is forced to choose whether she will kill the man responsible for her childhood abuse.

In our current context in Turkey (where women are murdered in near-impunity and the government has abandoned one of the few pieces of legislation, the Istanbul Convention, that could actually make a difference in preventing femicides) it is satisfying to see a woman take matters into her own hands. Scenes of Fatma killing off violent men bring to mind actual cases in Turkey, such as Çilem Doğan. Doğan was beaten and abused by her husband. After trying to report him to the police to no avail, in 2015 she finally shot him to death. Doğan’s image went viral when she was photographed being taken into police custody giving the camera a thumb’s up and wearing a shirt that said, “Dear past, thanks for all the lessons.” In her police statement, Doğan declared, “Is it always women who are going to die? Let men die a little too.”

Male violence and impunity have reached such a level in Turkey that one would have to be completely insensitive to the severity of the issue to begin hand-wringing about whether or not violent self-defense is warranted. This is not for me to decide but rather for the women involved. However, on the level of the fictional series “Fatma” we can see that the show is perhaps not as politically progressive as it first seems.

In the midst of this political, systematic, and utterly preventable violence against women, what “Fatma” offers is a merely individual solution. Fatma is justified in seeking revenge, but she does it as a vigilante, a lone wolf. That a woman has to become an assassin to get justice in this country is not a sign of feminist empowerment but hopelessness. Certainly, as a viewer one gets satisfaction in seeing abusers or rapists what they deserve. But politically, the message is that there is no alternative: nothing can change in this society through collective action.

There are only a few moments where we glimpse a feminist politics in “Fatma.” This is in fleeting acts of solidarity between Fatma and other women she encounters, like the gas station attendant who can tell that Fatma is being coerced by the man who is following her. The woman working calls the cops, who immediately believe the man that everything is fine. This is a great illustration of the social forces at work. Overall, though, Fatma is forced to act alone. This is the trope of the male hero. It contrasts starkly with the principle of solidarity emphasized by the feminist movement in Turkey: “You will never walk alone.”

Perhaps the problem is that with “Fatma,” as with “Ethos,” women’s stories on TV are still being told by men. It is time that Netflix and other platforms let the subjects of these critical issues tell their own stories.

Kenan Behzat Sharpe is an Istanbul-based journalist and academic. He completed his PhD in Literature at the University of California, Santa Cruz in 2019. He is a co-founder of Blind Field: A Journal of Critical Inquiry and an assistant editor at Commune Magazine.