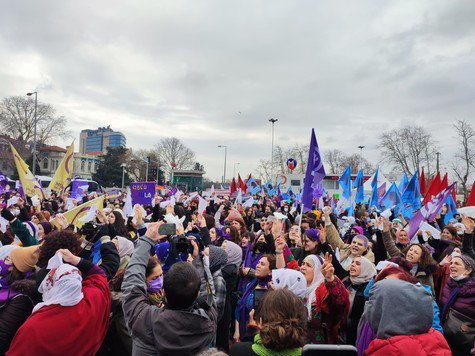 Ahead of International Women’s Day, a demonstration was held in Kadıköy district and in Anıtpark in the capital city of Turkey. After the press statements was read out, the demonstrations continued with songs, a concert and folk dances.

March 8 demonstration in İstanbul: ‘Let your papa state pay the price for the crisis’

« The İstanbul March 8 Women’s Platform organized a demonstration in İstanbul’s Kadıköy on the occasion of March 8 International Women’s Day yesterday (March 6). Women applauded, sang songs and chanted slogans while also opening banners that read, « We step up our struggle against poverty, violence and exploitation; we have the power to change » » reports Evrim Kepenek in Bianet English.

Women also waved their white handkerchiefs to send their greetings to Kurdish politician and ill prisoner Aysel Tuğluk and all other women ill prisoners in Turkey who are not released due to the reports of the Forensic Medicine Institution which conclude that « they can stay in prison ».
While the names of the women who lost their lives as a result of male violence were also read out during the demonstration, women cried out loud: « We don’t want male justice, we want real justice. »

At the demonstration where women performed folk dances and chanted ululations, the press statement was read out in three languages.

We step up our struggle’

The statement in Turkish, Kurdish and Arabic was read out by Şenay Kumuz, Gamze Abay, Mercan Gül and İrem Kayıkçı. The women said:

« We step up our joint struggle against male domination, exploitation of labor, unemployment, poverty, flexible and precarious work, increasing male violence and policies of impunity, war, mounting violence and violations of rights in prisons and against our struggle on the streets, the ones who turn LGBTI+s, migrants and refugees into targets with discriminatory hate speech, fascism and promises of both the government and mainstream opposition ».

Referring to the economic hardships in Turkey, they added:

« Inflation rates have increased along with the economic crisis; while the prices of all products, especially basic needs, have increased, even the most basic necessities such as housing, heating and food have been restricted. With the hikes in electricity and natural gas prices, there is a desire to confine women to dark and cold houses, to family and to the cycle of violence. We will not pay the price for the crisis; let you papa state pay it. »

‘We are against warmongering’

The women’s statement also referred to the Russia-Ukraine war on its 11th day yesterday. Underlining that « they do not accept the unjust policies of war and invasion of Russian imperialism and NATO in Ukraine, Donetsk and Luhansk », women briefly added the following:

« As the ones who closely witnessed what women, children and poor people forced to migrate are subjected to as refugees, we are against this warmongering. We are a witness to the massacres of refugees in the Aegean Sea, on the Greece-Turkey border and in their living spaces. We will not let refugee women be sexually, physically and psychologically assaulted.

« Since the beginning of 2022, men have massacred at least 64 women. The attacks on LGBTI+s have been gradually increasing and there is an effort to normalize hate speech. Subjected to homophobia, transphobia and economic violence, LGBTI+s are tested with poverty and they are driven to suicide, like Zirve Soylu. »

‘We have the power to change’

« We know that these are not suicides but the murders of the heteropatriarchal capitalist order. They attack by withdrawing from the İstanbul Convention, by attacking the Law no. 6284 [on the Protection of Family and Prevention of Violence Against Women], by amending the law on alimony, by arresting and by marking television programs as targets.

Women meet in Ankara ahead of March 8: ‘We are here to call you to account’

« With the motto « Long live March 8 in the face of male and state violence, crisis and poverty », the Ankara Women’s Platform staged a demonstration in the capital ahead of March 8 International Women’s Day » says Bianet English.

As reported by Mezopotamya Agency (MA), at the demonstration held in Anıtpark yesterday (March 6), women opened banners that read Women don’t want war », « Biji tekoşina jinan » (Long live women’s struggle, in Kurdish) and « We won’t bow down to your violence ».
Reading out the names of the massacred women and the women politicians behind bars, women said, « Here ». The press statement was read out in three languages, Kurdish, Turkish and Arabic.

Women briefly stated the following:
« While Şule Çet, Emine Bulut, İpek Er, Ceren Damar, Aleyna Çakır, Fatma Altınmakas, Hande Kader and several other women are being taken away from us, we have called the perpetrators and the ones who let the perpetrators go unpunished to account. »
« We have defended each other in the face of state violence, the biggest criminal organization in history, and male violence, which it tries to legitimize from the public sphere to the private sphere. While political power holders are once again trying to ensure their stay in power by attacking women, we don’t bargain with the male-dominated system, which wants to silence us. »

« Several women, especially Kurdish women, are subjected to strip search and all types of torture in prisons. Several women prisoners such as Aysel Tuğluk are not released even though their health does not allow them to stay in prison. Ill women prisoners’ right to healthcare is hindered.

« Garibe Gezer was subjected to sexual violence and all types of torture in prison; it was said that she committed suicide. Deniz Poyraz was massacred inside a party [HDP] building which was under police surveillance 24/7. Gülistan Doku has been missing for 2 years. We are here to bring the male-dominated state, which operates the enemy law and pursues special methods of war against Kurdish women, to account.

‘We will not stay silent’

« In the face of all misogynist policies of the 18-year [Justice and Development Party] AKP rule, we have turned the streets into a purple carnival. We have built our own unique and autonomous existence by standing up against all types of male violence, husbands, their beatings, religious clerks, fathers… We know how to topple male dominance; we know that we will send patriarchal capitalism, the source of violence, to the dustbin of history by struggling together; that is why we are here.

« We promise all women with whom we defend one another, all women whom we have lost after a year full of resistance, LGBTI+s, all prisoners held in prisons and all women who struggle to live in the face of harassment, rape and male violence on the street, at home, in the workplace and at school: We will not stay silent. We will move heaven and earth. »