Erdogan’s Bargain With Nato For Fight Against Kurds 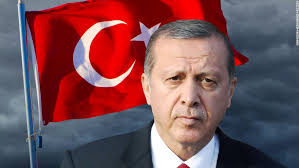 “Turkey has rejected claims it is blackmailing Nato by blocking a military plan for the Baltics and Poland unless it receives support for its effort to defeat Syrian Kurd forces on its borders” sais the Guardian  on Tuesday, 3 Dec.

According to the news  “the Turkish government made the claims ahead of what may prove to be a bruising meeting between President Erdogan and major European powers in Downing Street on Tuesday afternoon.”

It is said that Turkey claimed it had full veto rights for any proposal within Nato. “Nato is an institution where Turkey has full veto rights, politically and militarily, and there are procedures here,” Turkish government officials said. “There is no such thing as Turkey blackmailing – a statement like that is unacceptable.”

“Erdogan has blocked a defence plan for Poland and the Baltic states until Nato recognises that the Syrian Kurdish YPG are a terrorist threat that must be addressed” said on Guardian. Before his departure from Ankara, Erdogan repeated the Turkish position telling the reporters “If our friends at Nato do not recognise as terrorist organisations those we consider terrorist organisations … we will stand against any step that will be taken there.”

At the four-way meeting with Boris Johnson, Emmanuel Macron and Angela Merkel, Erdogan will demand Europe endorses his plan for a “safe zone” and will also seek a EU donation for the reconstruction of northern Syria. It is expected that President Erdogan will also complain that Nato allies have left Turkey alone in its fight against terror, particularly against the YPG. The meeting is a precursor to a wider Nato leaders meeting on Wednesday that could see divisions exposed across a wider front.

“Turkey says its incursion into north-east Syria is designed to set up a safe zone that weakens the YPG, a faction that it claims is umbilically linked to the Kurdistan Workers’ Party that it has been fighting for decades. Trump’s decision to give Erdogan the green light has been seen by the US military and Republican senators alike as a policy disaster that has weakened the US’s reputation for standing alongside allies such as the Syrian Kurds” said on Guardian.