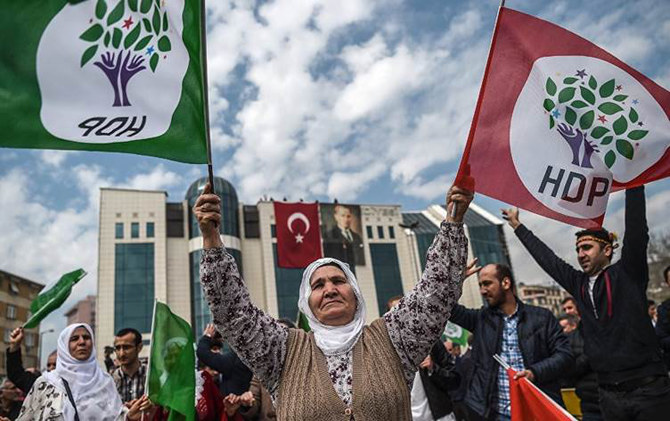 Turkey’s President Recep Tayyip Erdoğan has thrown down the gauntlet to his political opposition through a series of major moves to reshape the country’s political and economic landscape.

On March 17, Turkish prosecutors moved to shut down the pro-Kurdish Peoples’ Democratic Party (HDP), accusing it of being simply the political arm of the Kurdistan Workers’ Party (PKK) terrorist group.

This was soon followed by a decision by the national government to seize ownership of Istanbul’s Gezi Park and hand it over to an unknown foundation connected to the Ministry of Culture. Gezi is particularly symbolic because it was the flashpoint for protests against Erdogan in 2013 and his increasingly authoritarian behaviour.

On Friday, President Erdogan sacked the head of Turkey’s Central Bank Naci Agbal in favour of Şahap Kavcıoğlu, a supporter of Erdogan’s unorthodox view on interest rates and an ally of his son in law Berat Albayrak. The next day, Erdogan signed a presidential decree to remove Turkey from the Council of Europe’s Istanbul Convention which was designed to combat violence against women. This decision sparked instant protests from Turkish women, who have suffered from an epidemic of violence and abuse through the COVID-19 lockdowns.

Gökhan Bacık, an expert on Turkish politics who teaches at Palacky University in the Czech Republic, assessed that the drumbeat of deeply divisive decisions were indicative of Erdogan’s fear of his own declining political stock and his desire to usher in a more personalised regime.

“Erdogan knows his limits and he has concluded that the only way to survive is extreme authoritarianism and extreme partisan politics,” Bacik told Ahval News’ Editor in Chief Yavuz Baydar in a recent podcast.

Bacık explained that the current system of “competitive authoritarianism” was beginning to give-way since the Gezi Park protests but the real blow to Erdogan’s confidence came in the summer 2019 local elections that saw his Justice & Development Party (AKP) swept from office in Turkey’s largest cities.

In particular, Erdogan and his party have directed their ire towards the HDP whose electoral success since 2015 has added to his critics in parliament. Bleeding support among Kurdish voters for his own party, Erdogan’s goal now is aimed at depriving the opposition of its second largest faction ahead of possible elections ahead of the 2023 date.

“The conclusion is very clear – so long as the HDP is with the opposition and still popular, it is very unlikely for Erdogan to get 50 percent in any election,” said Bacik.

Erdogan is no stranger in pursuing this unrepentantly divisive strategy. Both his AKP as well as its partner Natonalist Movement Party (MHP) are each reliant on a conservative base of support,  so nakedly populist measures ensure their continued appeasement.

This was on full display with the withdrawal from the Istanbul Convention on Saturday. Bacik said that exiting the convention “gives a lot of energy to Erdogan” because it feeds his conservative, Islamist base, but it also could be part of a wider plan to break-up the large opposition bloc.

To this end, Bacik believes the move coud peel off support from the small Islamist Felicity Party that is currently against him. As Turkish politics becomes more about small gains to stay in power over compromise, Bacik contends this could be part of Erdogan’s current strategy.

The main crux of that strategy though may be in forcing the combined forces against him to split apart at the seams. Compared to the AKP-MHP’s homogeneous set of supporters, the opposition is held together more from a combined distaste of Erdogan than anything else. By making these large and controversial decisions, it enrages the opposition at the same time as exposing where they diverge, creating space for Erdogan to act.

“Erdogan is trying to focus on breaking this up, one by one,” Bacik said.