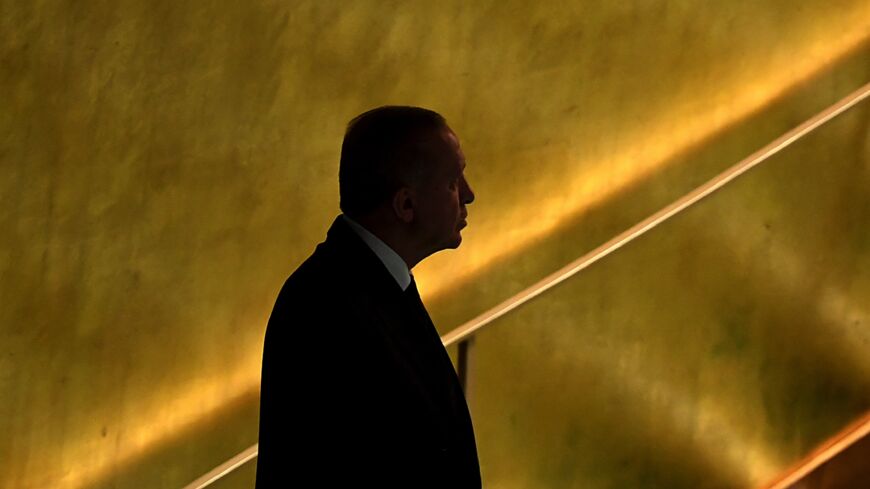 « Erdogan’s New York trip was mainly aiming to boost his dwindling support at home, yet the trip has apparently failed to achieve its main objective. » says Cengiz Candar in Al-Monitor.

During his speech at the 76th Session of the United Nations General Assembly, Turkey’s President Recep Tayyip Erdogan has likened the ideological fanaticism in the Western world to the Islamic State’s (IS) fanaticism, sending shockwaves to the international community.

“We as the humanity fight against yet another virus that is more destructive, more lethal and more insidious than COVID-19. It is called the ‘virus of Islamophobia.’ This virus is rapidly spreading in countries that have for years been shown as the cradle of democracy and freedoms,” he said. “Islamophobia and xenophobia have now taken captive the politics. They have turned into a destructive trend that disrupts Muslims’ daily lives, directs state policies and threatens social peace.”

For international politics, his comparison of alleged Islamophobia in the West to IS and treating it at equal par with the fanaticism of the infamous movement that is still alive in the Middle East has been the most memorable event of his four-day New York performance. What makes it even more interesting is that such a vitriolic assessment of the Western world is presented in the immediate aftermath of the Taliban’s takeover of Afghanistan.

Contrary to the perception of his many critics and opponents, Erdogan’s any step and statement is a well-choreographed move in advance. Contrary to the widespread belief about him, Erdogan is rarely impulsive. Therefore, his lament at the “virus of Islamophobia,” which he defined as “more destructive and more lethal” than the COVID-19 pandemic, aims to elevate and present himself as the uncontested leader of the Muslim world. He wants to be recognized as “the leader” of the Muslim world, speaking on behalf of them at the UN General Assembly.

In a way, Turkey’s president is in a quest for the reincarnation of the notable Third World leaders of the Cold War era. In addition to his attempts to posture himself as the leader of the Muslim world, he also acts as the self-appointed spokesman of the new Third World.

Addressing the General Assembly after paying lip service to Turkey’s bid in the European Union membership process, Erdogan expressed solidarity with the African Union, “drawing on the strength of Turkey’s deep-rooted ties with Africa, which dates back centuries.” He stressed that Turkey was consolidating its unifying position between Europe and Asia and the great importance that Turkey attaches to developing relations with Latin America and the Caribbean region.

He also used his visit to New York to launch a book carrying his name and undoubtedly written by ghostwriters. The 216-page book, « A Fairer World Is Possible » published in different languages simultaneously underscores his acclaimed new international ambitions. The giant billboards at Times Square advertised the book with Erdogan’s huge profile photo on its cover.

With all the fanfare around his New York visit, including an exaggerated motorcade comprised of scores of armed cars and sirens touring the streets of Manhattan, Erdogan’s performance was designed for domestic political purposes more than anything else.

For Erdogan, his priority is to boost his dwindling image in Turkey. His survival until the elections in 2023, the centenary of the foundation of Turkey, is the most pressing issue in his political and personal agenda. Thus, every step he takes and every statement he makes aims to advance that political agenda. His visit to New York was no exception in this regard. Yet he did not achieve much, despite the expectations of his team before the visit.

The Turkish public was made to believe that Erdogan would have an audience with President Joe Biden in New York. A meeting could have signaled that relations between the United States and Turkey were back on a normalization track following a tumultuous period. Erdogan and the US president had their first and only face-to-face meeting on the sidelines of the NATO summit in Brussels in June. According to Erdogan and his inner circle, a follow-up meeting with Biden in New York could have sent positive signals to international investors and world leaders on how solid Erdogan’s international status was. Indeed, Erdogan was also planning to use his days in New York to meet with corporate America and world leaders.

All of these plans were pre-choreographed to make an impact on his image inside Turkey. Yet they failed.

Biden had no time for Erdogan, and after the Taliban’s swift victory in Afghanistan, it seemed there was nothing urgent to talk about between the two leaders. Secretary of State Antony Blinken met shortly with his Turkish counterpart, Mevlut Cavusoglu. After the meeting, Blinken’s description of Turkey as a « NATO ally » instead of a « strategic ally » or a « strategic partner, » as American officials previously describe the ties over the past two decades, was duly noted by international relations experts.

Nevertheless, some have interpreted the description as some sort of a sign of improvement in relations coming from an American official who previously referred to Turkey as a « so-called strategic partner. »

In New York, Erdogan met with the heads of Croatia, Slovenia, Poland, Guinea-Bissau, Georgia, Finland, Iraq, Burundi and Libya — not sufficiently marketable for the Turkish domestic audience. He also didn’t meet with any noteworthy representatives of corporate America.

Nonetheless, Erdogan’s handpicked media entourage and sycophants from his party who accompanied him to New York tried to draw a success story on the visit. While in New York, Erdogan inaugurated the Turkish House, a 35-floor high rise just across from UN headquarters. The inauguration ceremony began with prayers by the head of the Directorate of Religious Affairs who traveled to New York for the occasion. A lawmaker from the ruling Justice and Development Party who was present at the ceremony said the inauguration of the Turkish House was « one of the most remarkable successes of Turkish foreign policy in 500 years. »

In terms of Erdogan’s image within Turkey, his New York performance seemingly failed to create much impact, neither positively nor negatively. However, what international observers should not miss is that the visit, once more, confirmed the ever-broadening wedges between Turkey and the Western world.

Under Erdogan, Turkey is steadily sailing toward a non-Western trajectory in a multipolar world where China is emerging in its East. Erdogan’s cautious tone in regard to the Uyghur issue during his UN speech also reflected his efforts not to attract any outrage from Beijing. When it came to targeting the United States and the Western world, meanwhile, Erdogan didn’t mince his words.