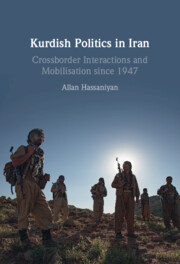 Reflecting on seven decades of the Iranian Kurdish movement, this book offers a comprehensive and critical analysis of the politicisation of national sentiments within Iran, and the connections the movement made and developed with Kurdish groups in Iraq. Looking at Kurdish-state relations through events taking place across remote, rural and urban areas in Kurdistan, Allan Hassaniyan analyses nationalist as well as non-nationalist aspects of Kurdish politics and history, reading the evolution of Kurdish nationalism through analysing crossborder Kurdish interaction. Paying particular attention to movement mobilisation and different aspects of the collective actions and insurgency deployed by actors, civil society organisations and the political parties of Iranian Kurds during different phases of the movement, Hassaniyan demonstrates how the ethnonationalist movement of the Iranian Kurds was a product of a discriminatory policy pursued by changing Iranian regimes toward non-Persian and non-Shiite communities in the country, particularly in the second half of the twentieth century.

Kurdish Politics in Iran:Crossborder Interactions and Mobilisation since 1947 by Allan Hassaniyan

Contents
1 – Introduction
2 – Kurdish Nationalism: From Emergence to Politicisation
3 – The Kurdish Peasant Revolt: the First Indication of Class Struggle
4 – Movement Mobilisation through Crossborder Interaction
5 – The 1979 Revolution and the Iranian Kurdish Movement
6 – Khodmokhtari: the Focal Point of Kurdish–Regime Dispute
7 – Internal Disintegration and Chaos
8 – Decades of Decline and Uncertainty
9 – Reform and Repression
Conclusion