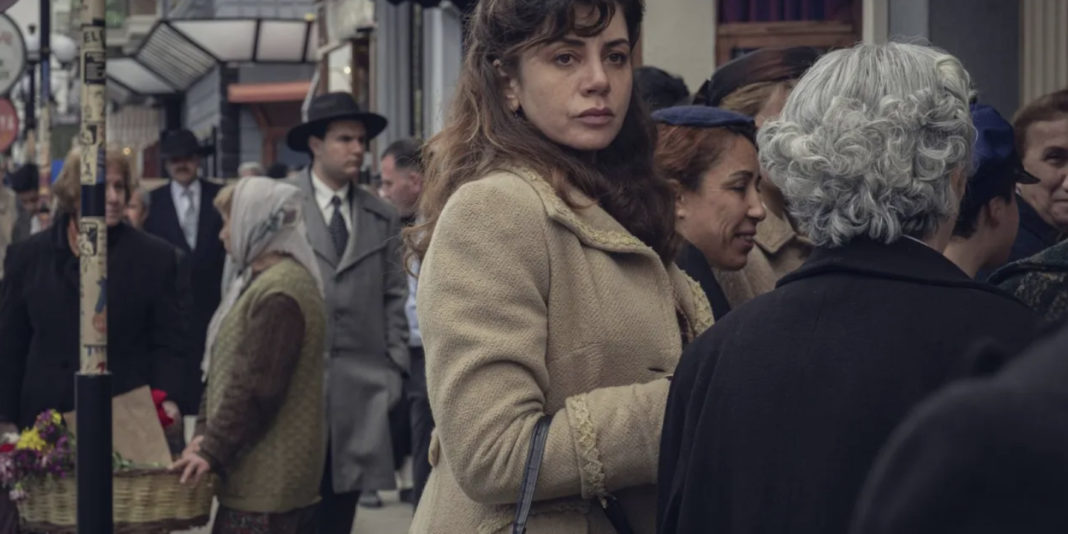 ““The Club,” a new Turkish series that was released last Friday on Netflix, sheds light on the social and political pressures Turkey’s religious minorities experienced in the early 1950s, resulting in their exodus from the country in search of a better and safer life” explains Dr. Merve Reyhan Kayıkcı on the website of Stockholm Center for Freedom.

The lead character is a young Jewish woman, Matilda, who lost her father and brother in a labor camp in eastern Erzurum’s Aşkale district. The father and son were sent to the camp after an employer wrongfully complained to authorities that they had not paid the obligatory capital tax.

The Capital Tax Law (Varlık Vergisi) was a wealth levy enacted by the Turkish parliament on November 11, 1942. Although its ostensible purpose was to raise funds for Turkey’s possible entry into World War II, it was intended to destroy the economic position of non-Muslim minorities in the country and reinforce the ongoing process of economic Turkification. The law was the final act in a series of anti-Jewish and anti-minority measures adopted in the early years of the Turkish Republic.

According to the law, the tax had to be paid in one month and although it was imposed on Muslims and non-Muslims alike, non-Muslims were made to pay taxes 20 times higher than Muslims. Many non-Muslim merchants had to pay taxes that exceeded their existing wealth and had to urgently sell possessions to come up with the money in a short period of time.

Those non-Muslims who were unable to pay the tax were sent to labor camps. A total of 2,057 people were sent to the camps, and according to official records, 21 people died.

The TV series is one of the first to discuss the detrimental effects of such discriminatory laws from the perspective of minorities. Gabi Behiri, a Turkish Jew, said on Twitter that Jews were often portrayed through anti-Semitic tropes in Turkish popular culture and that this was the first time their culture, language and religion were represented truthfully.

“Jews are often represented through stereotypes, as Mossad agents or greedy loan sharks,” he said. “Jews are shown as rich and dark figures, but thousands of Jews, such as myself, who have lived in this country know this is not true.”

Behiri added that the series had shed light on a community that had shrunk over the years due to oppressive policies.

Journalist Karel Valansi, from the Jewish Şalom newspaper, said on Twitter the series depicted the life of Turkey’s Jews that had been grossly underrepresented in Turkish popular culture.

The series doesn’t only cover the stories of the Jewish community, however. One of the main characters in the series, Orhan, who is the owner of a club, is Greek but pretends to be a Turkish Muslim. He warns his mother to speak Turkish at home and in public. In an atmosphere of increasing anti-Greek sentiment, Orhan fears he will lose everything if it becomes known that he was born as Niko into a Greek family.

Orhan’s fears are not unfounded, as he is forced to let go of his non-Muslim employees in the club because the authorities warn him that the entertainment industry should be “Turkified.” Drawing up a list of all Greek, Armenian and Jewish workers, the club management fires them one by one.

The 1950s were difficult years for all religious minorities, especially in İstanbul. The pressure to speak Turkish increased, and many Greeks and Armenians were tried for “insulting the Turkish nation.” The charges were brought as a result of the complaints of disgruntled neighbors, employers or workers.

A campaign called “Citizens, Speak Turkish!” (Vatandaş Türkçe Konuş!) was started in the 1920s and continued into the ’50s, and minorities were often yelled at for speaking other languages in public.

The political tensions gradually increased, leading to a pogrom in September 1955, during which mobs attacked the homes and businesses of İstanbul’s minorities.

According to the Greek press, 15 people died while up to 300 were injured. Scores of women were raped and thousands of properties destroyed. Thousands of Greeks and other minority communities left Turkey in the aftermath of the pogrom, permanently damaging İstanbul’s cosmopolitan social structure.

Garo Paylan, a deputy from the Peoples’ Democratic Party (HDP), submitted a motion to parliament in September demanding that an investigation be launched into the incident and that authorities identify the public officials and civil perpetrators who organized the pogrom.

On the same subject: The Next Turkish TV Sensation Has an Israeli Twist

The Next Turkish TV Sensation Has an Israeli Twist – Haaretz

"From the director who sparked 2018's 'Bride of Istanbul' craze in Israel (and elsewhere), "The Club," now out on Netflix, has all the elements...
Read more