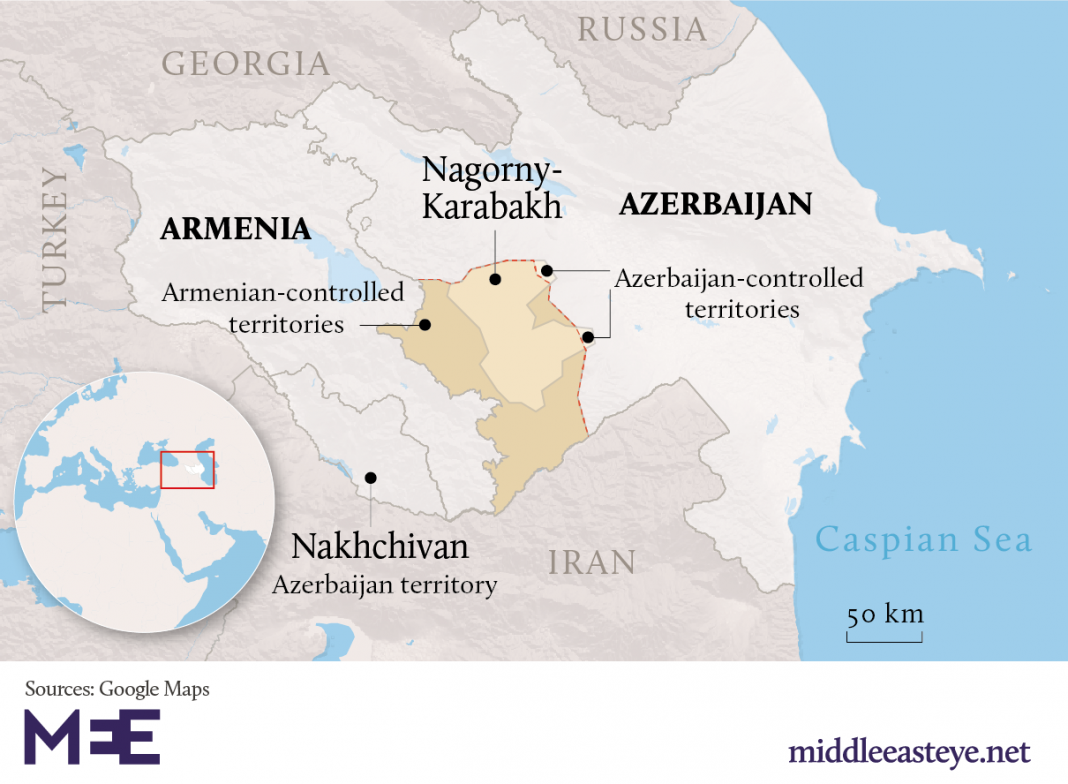 Armenians and Azerbaijanis coexisted in Soviet days. But conflict over the disputed territory exploded in the late 1980s, leaving festering wounds that have erupted anew.

SHGHARJIK, Armenia — The concrete memorial to 30 Azerbaijani soldiers — pockmarked, stained and cracked — pokes out of the craggy mountainside next to the crumbling remnants of two junked cars.

They died fighting for the Soviet Union in World War II, but the time has come, the current head of the village says, for the soldiers’ monument to go.

“We also have our heroes now,” said the village head, Shahen Babayants, who is Armenian.

Armenians and Azerbaijanis lived side by side in the Soviet days, until conflict over the disputed mountain territory called Nagorno-Karabakh exploded in the late 1980s into riots, expulsions and a yearslong war. The violence left personal wounds festering for decades, as stubborn as the tan and gray stone ruins of Azerbaijani villages still scattered in the Armenian countryside.

In the last two weeks, those unhealed scars have erupted into a modern-day conflagration of trench warfare, drone strikes and artillery bombardments. More than 500 Armenian soldiers have died, along with scores of civilians and an unknown number of Azerbaijanis. A cease-fire brokered in Moscow over the weekend has failed to hold, and President Ilham Aliyev of Azerbaijan has threatened a further escalation of his offensive.

The new war over Nagorno-Karabakh, in which Azerbaijan insists it is ready to fight to recapture the swath of land Armenia conquered in the 1990s, is emerging as this century’s deadliest conflict in the southern Caucasus region that separates Europe from Asia, between the Black Sea and the Caspian Sea.

The conflict has the potential to spiral into an even bigger crisis with unforeseeable consequences. It is already drawing in Azerbaijan’s ally Turkey, which is a member of NATO; Russia, which has a mutual-defense treaty with Armenia; and even Iran, which borders the region to the south.

For the region’s populace, the war is a continuation of on-off strife over both territory and history, with roots going back more than a century. The days when the Soviet Union kept a lid on such conflicts, and Azerbaijanis and Armenians mostly lived together in peace, feel like an irrevocably lost world.

“Each wants to say that he is the master of this land,” said Mr. Babayants, himself a refugee who left Azerbaijan in 1989. “To live together is, put simply, impossible.”

He settled in Armenia, just over the border, in a village that had recently been home to Azerbaijanis. A few years after he arrived, the village took fire from Azerbaijani forces. The Azerbaijani graveyard, of all places, was hit.

Beyond that border, a gray-green expanse of mountains, is territory that is internationally recognized as part of Azerbaijan, but has been effectively controlled by Armenia ever since the 1990s war. It includes both the Armenian-majority enclave of Nagorno-Karabakh, and land that surrounds it and links it to Armenia.

Some 500,000 Azerbaijanis were expelled, often violently, from that territory, and more than 200,000 were forced out of Armenia proper.

For decades, international mediators have been looking for a way to hand territory back to Azerbaijan while preserving the safety of Armenians in Nagorno-Karabakh. To Mr. Babayants, the lesson of history is that returning those territories is out of the question. For Azerbaijan, the loss of them has been a national tragedy.

Azerbaijanis who lost their homes in Armenia and Armenian-controlled territory make up some 10 percent of Azerbaijan’s population. Their desire to leave cramped housing and to return to village life has been a potent political force in Azerbaijan, and it helps explain the domestic support for the escalation of the conflict by Mr. Aliyev, the Azerbaijani president.