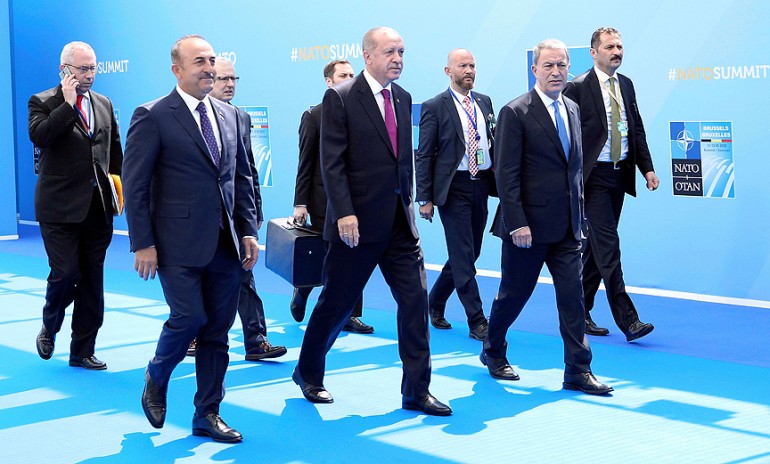 « The spat about Finland and Sweden’s application for NATO membership has taken a serious turn. Turkish President Recep Tayyip Erdoğan’s initial objections were to Scandinavian countries acting like “some kind of guest house for terrorist organisations.” His chief foreign policy advisor and spokesperson, İbrahim Kalın, claimed it was a matter of national security for Turkey » reports Robert Ellis in Ahval News.

Now Erdoğan has raised the stakes. “As long as Tayyip Erdoğan is at the head of the Republic of Turkey, we cannot say ‘yes’ to the entry of countries that support terrorism into NATO.” What originally was portrayed as a question of security has morphed into a question of personal survival. But bearing in mind next year’s presidential and parliamentary elections, this is the real issue.

In 2015, the Bipartisan Policy Center noted that Erdoğan’s governing Justice and Development Party (AKP) relied on the narrative of a booming economy for continued electoral success. Despite Erdoğan’s claim that Turkey is pursuing a suitable economic policy, all economic indicators point in the opposite direction.

Russian economist Sergei Gurlev has in a perceptive analysis noted the same pattern in Putin’s Russia. First a period of fast economic growth, which when it lost momentum led to a drop in his approval ratings. This is why Putin in 2014 decided to address an economic problem with a non-economic solution: the annexation of Crimea.

Now, running out of options, Putin has decided to return to his 2014 recipe: the invasion of Ukraine. Gurlev concludes: “Dictators are prone to making such mistakes, especially those who, like Putin, eliminate critics, suppress independent media and stifle debate in and outside the system.”

There is a similar pattern in Turkey. One month after an attempted military coup in 2016, Turkey launched its first incursion into Syria (Operation Euphrates Shield), the first of four operations. The operation was launched on the same day (August 24) that then-Vice President Joe Biden landed in Ankara in an attempt to mend U.S.-Turkey relations after the United States was accused of backing the failed coup.

In the second incursion in January 2018, the invasion and subsequent occupation of Afrin, a Kurdish enclave in northwestern Syria (Operation Olive Branch), the recipe for electoral success was confirmed. According to a survey nearly 90 percent of Turkish voters supported the operation.

In October 2019, President Donald Trump rolled over and allowed Turkey to invade and occupy part of the Kurdish-controlled Rojava region, east of the Euphrates (Operation Peace Spring). Like the previous operations, this led to a marked improvement in Erdoğan’s approval ratings, although it at the same time jeopardised the cost-effective and successful U.S. cooperation with the Kurdish-led Syrian Democratic Forces (SDF) in the war against Islamic State (ISIS).

Co-founder of the AKP and now opposition deputy, Abdüllatif Şener, has earlier said that Erdoğan would be prepared to drag Turkey into a civil war to hold on to power. On February 28, 2015, the AKP and the pro-Kurdish Peoples’ Democratic Party (HDP) agreed on a 10-point plan (the Dolmabahçe Agreement) to resolve the Kurdish question, but in June the HDP overcame the electoral threshold of 10 percent and won 80 of the Turkish parliament’s 550 seats. The AKP lost its overall majority.

In July, in a bait and switch deal, the United States was allowed to use Incirlik airbase in southern Turkey for air strikes against ISIS, but Turkey also took the opportunity to launch air strikes against the PKK. In November in a snap election the AKP regained its majority.

With a claim that Finland and Sweden harbour terrorists, the process repeats itself. In addition, Turkey is planning a new cross-border operation into Kurdish-held northern Syria, which will no doubt drum up electoral support.

At the same time, Erdoğan is understandably miffed that Greek Prime Minister Kyriakos Mitsotakis has stolen a march on him with his visit to the White House and an address to Congress. With reference to a proposed F-16 deal between the United States and Turkey, Mitsotakis warned, “The last thing that NATO needs at a time when our focus is helping defeat Russian aggression is another source of instability on NATO’s southeastern flank. And I ask you to take this into account when you make defence procurement decisions concerning the eastern Mediterranean.”

In response, Erdoğan stated that Mitsotakis no longer existed for him and he would never agree to meet with him. “We will continue our way with honourable politicians.” He also cancelled a summit with Mitsotakis planned for later this year.

Turkey has also made clear that if Greece does not demilitarise its Aegean islands, Turkey will challenge its sovereignty.

In March, at the Doha Forum in Qatar, Erdoğan’s chief advisor and spokesperson, İbrahim Kalın said he believed the need for a new security architecture would emerge after the Ukraine war.

Turkey is not only in conflict with NATO’s democratic values but also those of the 46-member Council of Europe and the European Union, whose rulings concerning  Osman Kavala and Selahattin Demirtaş Erdoğan considers “null and void.”

In 1964 Turkey considered intervening in Cyprus in defence of the Turkish-Cypriots but was warned by President Lyndon B. Johnson that if it did so, it could not count on NATO support in the event of Soviet intervention. Turkey’s President İsmet İnönü remarked, “A new world order will be formed in which Turkey will find its place.”

If what İbrahim Kalın says holds true, the question is what role Turkey will play.