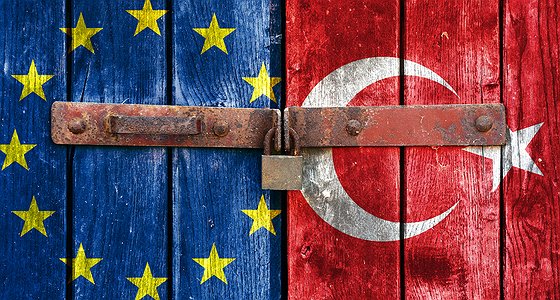 During the siege of Constantinople in 1453, the Orthodox Byzantines were debating the sex of angels instead of defending the fortress, tells a tale probably invented by Catholics. Actually, the tale referred rather to a religion-centered, intricate, decadent Byzantium, where people were at each other’s throats and consequently incapable of displaying a meaningful resistance to the assailing Ottomans.

Today both the heirs to the victorious Ottomans and their European “friends” seem to have been involved in similarly useless, yet dangerous arguments. Turks are at each other’s throats as well as the Europeans; the former are sinking fast into a bottomless abyss and the latter are trying to deal with the looming chaos at their eastern border without being capable of agreeing on a powerful and upfront response to Turkey.

Let’s consider last week’s European Council conclusions on Turkey. Actually it is not even about Turkey but the Eastern Mediterranean, as the chapter refers to. It is pathetic to see how Europeans are voluntarily letting themselves be abused by the Ankara regime’s strongman Erdoğan. Let’s take a look at three hot topics.

One can also read the Personal Blog of (HR/VP) Josep Borrell, the High Representative of the European Union for International Affairs, on March 30, 2021

Europeans are at their knees when it comes to the Syrians refugees kept in Turkey, with whom Erdoğan insidiously threatens the continent. They are ready to give in to Erdoğan’s ukases provided that he continues to keep the refugees and controls Turkey’s western borders, particularly with Greece. They are incapable of grasping that his regime, through its unlawful presence in and invasion of Syria has become one of the main root causes of the Syrian refugee crisis.

Regarding the Eastern Mediterranean and the Aegean, the so-called de-escalation celebrated by the entire Western world is also part of a pandemonium started unilaterally by Ankara years ago.Now that Ankara is pretending to back down, Europeans are rushing to take Erdoğan at his words. With the exception of the temporary retreat of Turkish gunboats and fighter jets, there isn’t a single initiative or action pointing at a lasting solution to the decades-old disagreements between Ankara, Athens and Nicosia, like the signing of the indispensable 1982 U.N. Convention on the Law of the Sea, or any other meaningful move for the re-unification of the island of Cyprus.

Precisely and thirdly, Europeans keep applausing for the upcoming informal five-party conference on Cyprus called by the UNSG in Geneva on April 27-29 when Ankara is pushing for its “two-state” solution against which there is an unwavering international consensus. Knowing perfectly well that strictly nothing will come out of this talk-shop, Europeans still pretend to consider it as a positive step, praising its tenure without referring to its “informal” nature as declared by the U.N. Moreover, they pretend to ignore Ankara’s recent fait accompli regarding Varosha, a no-go zone.

Europeans want to believe in things that have no reality. Actually they are making two false assumptions regarding their “give and take” formula baptized as a “positive agenda”. Firstly, they believe they have positive leverage over the Ankara regime, by which they can coerce it to behave in a peaceful manner towards Cyprus and Greece. (The termination of the rule of law in Turkey as well as the deplorable backsliding in Human Rights, is not in the balance there. Europeans don’t care about them and pay only lip service to them.) Alas, the only meaningful leverage they had was the future membership to the EU which is now de facto terminated.

Secondly and in connection to the first false assumption, Europe tends to ignore the fact that totalitarian regimes can neither be reformed nor reversed even to a minimally normative system to abide by the rules, in either the Eastern Mediterranean issue or in any other issue. In a nutshell, Erdoğan won’t change because he cannot change.

Appeasers refuse to diagnose that Ankara’s modus operandiis in complete conflict with the norms, standards, values and principles of the EU, which represent nothing but threats to the regime’s very existence. This is why the regime in Ankara can never be reformed. Accordingly, Turkey no longer has any means to engage with Europe or to uphold a normative institutional system, which has intentionally been dismantled over the years by the regime precisely because it constituted checks and balances to the arbitrary moves of the regime.

The Europeans’ Turkey dilemma is deep, as they have short as well as long term stakes in it. They are terrified by the prospect of losing their “NATO partner” to Russia, jeopardising their economic interests in Turkey, risking their Refugee Deal, provoking aggressive elements of the Turkish diaspora and accelerating Turkey’s implosion, which could lead to massive movements of Turkish refugees.

Therefore they are making the bet that the temerity of Ankara can be dialed down if some sweeteners can be offered. Thus they are “ready to engage with Turkey in a phased, proportionate and reversible manner to enhance cooperation”. But what will the modus operandiof such engagement be? What are Ankara’s capabilities for such an engagement, can it deliver to benefit from the so-called “positive agenda”?

Let’s take the big “carrot” that is the “modernisation of the Customs Union,’’ which has been in effect between the bloc and Turkey since January 1996. This is an old and most substantive bond that still exists between the two parties. Its revision has been stalled for years, and unfortunately was not able to be carried out during the time when relations were not as tense as they are today.

Technically, the agreement was considered as a key step towards full membership. Short of that perspective it is condemned to die out. Moreover, if extended to include agriculture and services, as proposed in the Borrell paper, it would need a very cumbersome harmonization with the relevant very dense acquis communautaire, which would take years. On top of that, these negotiations are going to have to contend with a dysfunctional economic structure in which Erdoğan is the sole decision-maker.

Politically, the conclusions mention the “effective application (of the Customs Union) to all Member States”. That implies its application also to the Republic of Cyprus that Ankara doesn’t recognize. The same problem had arisen before, when Turkey refused to extend the scope of the Customs Union to new Member Cyprus and got eight negotiation chapters blocked at the European Council held in December 2006. These chapters are still blocked to this day. It is almost impossible to conceive that Ankara will accept this condition to indirectly recognize the Republic of Cyprus. Last and certainly not the least ,the European Parliament who needs to approve the new deal, would, under present conditions never underwrite it.

All in all, the revision and the updating of the Customs Union looks unfeasible, which means that Europeans are in a way, fooling Turkey with an empty and inoperable promise.

So, what will be the end result?

First, the more the EU appeases and refrains from considering real sanctions like the ones imposed on Belarus or Russia for instance, the more Erdoğan will abuse Europe’s apprehensions, the longer the life cycle of its regime will be, and the more the turmoil it foments in the country and abroad will increase.Such “principle-free” appeasement is already having devastating consequences on European values as a collateral damage.

Second, even though Europeans profess to safeguard, cherish, and support Turkish civil society in opposition to the repressive practices of the regime, their rhetoric doesn’t match their actual three-monkey posture regarding these practices. Particularly since they forcefully advocate Belarusians’, Russians’ and other oppressed people rights. Europeans have lost the trust of the very civil society they are claiming to defend and support. There is a deep, irreparable loss of confidence and total disappointment among democrats and civil rights’ advocates in Turkey vis-à-vis the EU. A totally opposite outcome to what Europeans pretend in their useless pro-civil society rhetoric.

Those in Turkey who are trying to fight the totalitarian regime of Erdoğan have since learned that they can no longer count on the support of European governments and institutions, and are striving to survive without them. But those governments and institutions should cease to add insult to injury by using Turkey as a utilitarian object to serve their cynical interests, in total disregard to beings living on it.

Never forget: Erdoğan’s new Turkey considers itself nothing less than an alternative model, not only to the EU, but also to the entire West.

"Wait until the Turkish elections pass in May. Then, if necessary, change the rules." Andreas Kluth's analysis in Bloomberg on February 5, 2023. It takes...
Read more
INFOS & ACTUS

"Turkey-Russia ties are very important and Ankara would like to find a way to meet with Damascus without angering the Syrian rebels too much."...
Read more
OBSERVATOIREDE LA TURQUIE CONTEMPORAINE

"Wait until the Turkish elections pass in May. Then, if necessary, change the rules." Andreas Kluth's analysis in Bloomberg on February 5, 2023. It takes...
Read more