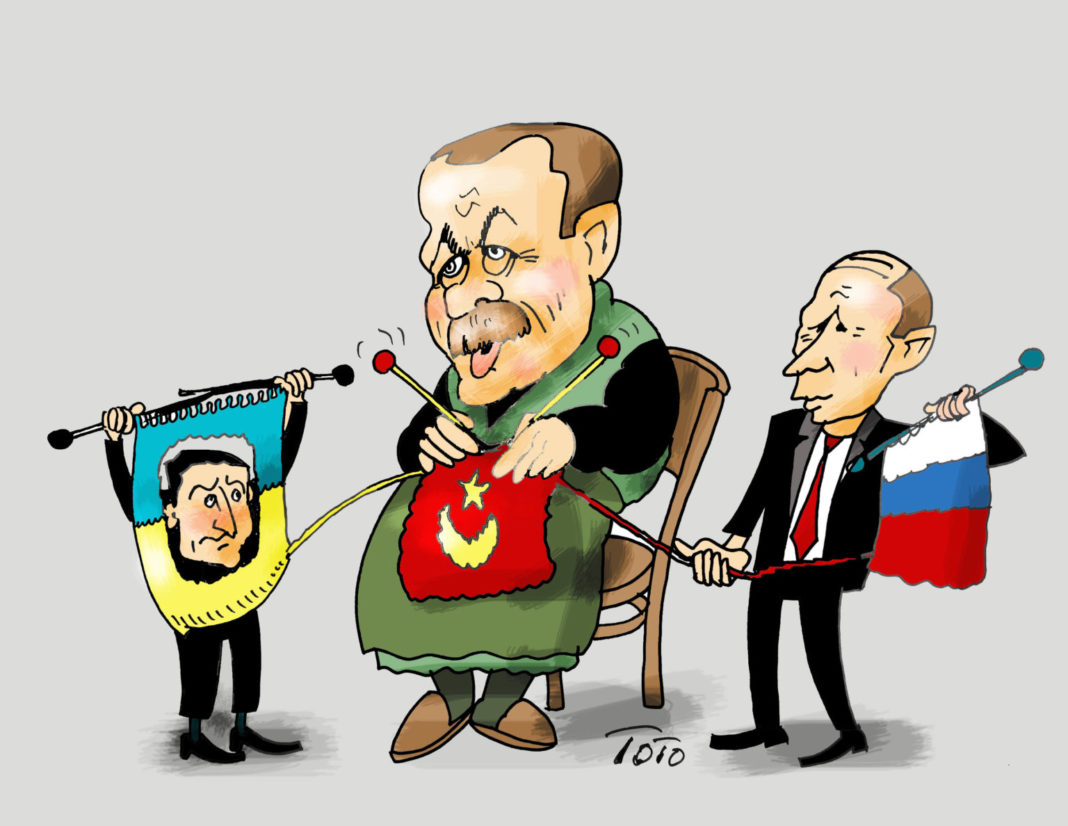 « On 9 March, the Israeli president Isaac Herzog met his Turkish counterpart Recep Tayyip Erdoğan, after a near six-year hiatus in high-level talks between the two countries. The next day, Erdoğan spoke on the phone with US president Joe Biden, a man who had not so long ago waited almost four months after being sworn into office before calling the Turkish leader. On 13 March, Greek prime minister Kyriakos Mitsotakis paid a visit. A day later, so did the new German chancellor Olaf Scholz. These official engagements, which took place within a week of each other, were the type of international attention for which the Turkish president has long been hoping » says Ramazan Hakkı Öztan* in Le Monde diplomatique.

Strikingly, all these visits to Turkey came after the Russian invasion of Ukraine. They form part of the building global momentum to put pressure on Russia and, arguably, make an example out of Putin – via sanctions, diplomatic isolation and military pressure – in order to avert what could be a more dangerous confrontation with China down the road. Highlighting the stakes, Biden himself said that the Russian invasion of Ukraine would ‘change the world’. If it does, what will it change for Turkey? Will Putin’s actions bring Ankara back into the NATO fold?

Russian invasion of Ukraine was both a blessing and a curse for Erdoğan. Over the last year or so, Turkey has battled one of the highest inflation rates in the world and Erdoğan’s plan to counteract this largely depended on an anticipated normalisation of economic activity and a smooth transition into the post-Covid era. Not only has this not materialised, but the war raised prices of gas and oil, a terrible scenario for Turkey, which is a net importer. Turkey was also poised to welcome a higher number of Russian and Ukrainian tourists this summer, but the war has dashed these hopes for the time being.

On the other hand, prospects of a re-alignment with the West could provide a major boost to Turkish markets and help bandage some of the economic damage done since 2019 and the S-400 crisis, in which Turkey bought a Russian missile system. Politically, a re-alignment could pay handsome dividends, too: high-level diplomatic engagements may help shore up Erdoğan’s legitimacy among his voters – a conservative bloc that is as anti-Western as it is anti-Russian, and which would be happy to see its leader emerge as a mediator, if not a policy-maker, on the regional stage. As such, the crisis in Ukraine has already provided opportunities for Erdoğan to exercise his preferred transactional approach to foreign policy.

However, this does not mean that the Ukrainian crisis signals a deeper shift for Turkish foreign policy and a return to a strategic partnership with the West. It is true that Russian aggression has historically pushed Turkey into a coalition with Europe and the US. This is why, in 1952, Turkey became a member of NATO when the Soviet Union openly threatened its territorial integrity after the end of the second world war. Nevertheless, Turkey’s resumption of its strategic partnership with the West is not feasible unless the crisis in Syria, in which Erdoğan has been at odds with the US, is resolved.

Historically, Turkey has moved away from the West and into the Russian sphere of influence three times, each episode related to Syria

Syria is key. Historically, Turkey has moved away from the West and into Russian sphere of influence three times, each episode related to Syria. The first was in response to Napoleon’s invasion of Egypt and his campaign in Syria (1798-99), which led the Ottomans and Russians to form a defensive alliance. In the years that followed, the Egyptian crisis continued to evolve and threaten the Ottomans. In 1833, the armies of Muhammad Ali of Egypt marched from Syria into the heart of Ottoman Anatolia, putting the very existence of the Ottoman Empire at risk. As the sultan’s pleas for help fell on deaf ears in Britain and France, Constantinople signed a treaty with the Russian tsar for defence and military aid.

The second period of rapprochement was a product of the collapse of the Ottoman and Russian empires after the first world war. In this better-known episode, lasting from the early 1920s to the late 1930s, the Bolsheviks and Kemalists made common cause as two revisionist powers that emerged to challenge the victors of the first world war. This alignment became consolidated at a time when the French ruled Syria and the British Iraq as mandatory powers. Ankara saw the presence of these Western empires next door as a threat, particularly given the British and French patronage of former Ottoman minority groups within Turkey’s new borders – the Kurds, Assyrians and Armenians.

The most recent episode of Turkish-Russian rapprochement was related to Syria, too, and came in the fallout of the Syrian Civil War. Even though the war was complex – at times Ankara neared open conflict with the Russians, such as when Turkey downed a Russian jet in November 2015 – the US decision in its fight against the ISIS to empower the Kurds came at the expense of its decades-long strategic alliance with Turkey. In June 2016, Erdoğan apologised to Putin for the downing of the Russian jet, thereby beginning a third period of rapprochement that lasts to this day and has seen extensive Turkish military operations – with Russian go-ahead – against US-backed Kurdish forces.

In all three episodes, Turkey turned to Russia after it felt an existential threat from developments in the territories to its south, particularly if it located the origin of this threat in the West. Therefore, recruiting Turkey into a coalition against the rise of revisionist ambitions across the globe is contingent on finding a political resolution to the Syrian crisis – one premised on democratic principles. Otherwise, Turkey will become the first place where the global sanctions regime could falter. In fact, the lure of taking advantage of a flagging Russian economy could push Erdoğan not toward an embrace of the West, but rather to continue operating in a transactional manner.

As we watch the war in Ukraine unfold and wonder how Ankara will be situated in the new US-led security architecture, Syria is the elephant in the room. We will see whether US policy toward Syria changes, and how the Russians respond in return. The delicate nature of the dynamics on the ground in Syria will complicate any effort to find a solution pleasing to all parties. As the most consequential piece of the puzzle for the Biden and Erdoğan administrations, the issue of Syria should be approached with extreme caution, as false steps in Syria risk spreading the current conflict beyond the bounds of Ukraine.

*Ramazan Hakkı Öztan is assistant professor of history at the Atatürk Institute for Modern Turkish History at Boğaziçi University.