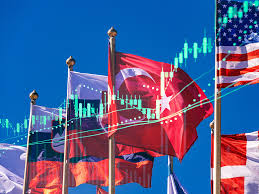 “Global markets had a heavy data agenda last week. US economy grew by 2.3% in 2019, having the weakest performance for the last 3 years. Keeping the monetary policy unchanged, Fed signaled that the repo operations would continue. While the UK formally left the EU, Bank of England (BoE) kept its policy rate on hold. In January, domestic CPI inflation was realized higher-than-expected as 1.35%. Besides, CBRT published the first Inflation Report of the year where inflation forecasts were kept unchanged. Manufacturing PMI exceeded the 50-threshold level, hitting 22-month high in January. Coronavirus outbreak related concerns were effective in the agenda of the global markets throughout the week.”

Fed did not change its monetary policy at its meeting last week and kept the policy interest rate in the range of 1.50% to 1.75%. In its press release, it was stated that job market is strong, investments and exports are weak, and household spending has increased moderately, while current policy stance is compatible with economic data. It is also stated that repo operations will continue until the end of April. Fed Chairman Powell, who made statements after the meeting, stated that they were not satisfied with inflation running below the 2% target. He also added that the current monetary policy stance will continue as long as the data are consistent with the outlook.

Growth in the Euro Area was weaker than expected in the last quarter of 2019.

GDP growth in the Euro Area was realized below expectations as 0.1% in the 4th quarter of 2019 on a quarterly basis. Thus, annual growth in the Area fell from 1.2% to 1%, indicating that the weakness of the economic activity persisted. Core inflation decreased to 1.1% on an annual basis in January and also depicted a negative picture regarding the course of consumption demand.

Bank of England (BoE) kept its policy rate on hold at 0.75% in its meeting last week. In the remarks, it was stated that signs of recovery regarding the UK economy have increased since December. On the other hand, cutting the growth rate projection from 1.25% to 0.75% for 2020, BoE also revised growth forecasts for 2021 and 2022 downwards. Removing the statement of “limited and gradual” tightening from the policy text, BoE used the guidance wording of “some modest tightening” instead.

The UK formally left the EU membership on 31 January and will be in a transition period which is due to end on 31 December 2020. During this period, the country will keep its status as a member of both single market and Customs Union. GBP depreciated more than 10% against USD since the referendum held on June 2016 that resulted in Brexit.

In December 2019, exports increased by 6.4% yoy while imports rose by 14.9% yoy, according to TURKSTAT data. Thus, foreign trade deficit expanded by 57.6% on an annual basis and became 4.3 billion USD. In the whole year of 2019, annual increase in exports was 2.1%, while imports decreased by 9.1%. The foreign trade balance gave a deficit of 31.2 billion USD throughout the year.

CBRT, publishing the first Inflation Report of this year, did not make any change regarding inflation forecasts. According to that, inflation forecasts for 2020 and 2021 were kept at 8.2% and 5.4% respectively. CBRT Chair Uysal emphasized that the aggregate demand conditions do not draw an inflationary outlook despite the recent recovery in the economic activity. Uysal pointed out that the latest adjustments in taxes are expected to put a downside pressure on inflation and the projected rise in oil prices is expected to have limited effects. In this regard, Uysal stated that they expect inflation to decline moderately towards its year-end target starting from Q2 and it would stabilize at 5% in the medium term, thanks to tight monetary policy stance.

CPI inflation came in above expectations in January.

In January, CPI increased by 1.35% mom while domestic PPI recorded an increase of 1.84%. In terms of main spending groups, the highest monthly increase was realized in miscellaneous goods and services with 4.88%, and that was followed by food and soft drinks (4.65%). TURKSTAT has revised the weights of the main expenditure groups in consumption basket. The weight of food and soft drinks group came down from 23.29% to 22.77% in the basket.

Turkey’s manufacturing PMI rose to 51.3 in January, exceeding the threshold value of 50 for the first time in the last 22 months. This development was driven by growth in new orders and acceleration in production. While the relative recovery in consumption demand reflected positively on production, new export orders also increased during this period.

Markets and the agenda of this week…

The effects of concerns originating from coronavirus, which started in China and spread to other countries, continued last week. On Thursday, the World Health Organization (WHO) announced that it was declared “a global health emergency” in relation to the coronavirus outbreak. Global stock markets were under pressure throughout the week with news that the outbreak would negatively affect global growth. BIST-100 fell 2.5% wow last week, while USD/TRY rose to the level of 5.98 at the close on Friday. This week, the agenda of the global markets includes US labor market indicators and PMI data for various economies.

For full report, please see below and attached file: