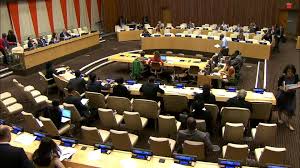 A United Nations committee deferred action on recommending Turkey’s Ensar Foundation, caught up in a child sexual abuse scandal in 2016, and the Turkey Diyanet Foundation (Türkiye Diyanet Vakfı , TDV) for special consultative status with the Economic and Social Council (ECOSOC) during its 2020 regular session in February 3, 2020.

The Committee on Non-Governmental Organizations, a standing body of the ECOSOC, is tasked with considering the applications of NGOs for consultative status with the UN. This committee makes recommendations to the ECOSOC, which can accept or decline a recommendation. The committee deferred action on the application of the Ensar Foundation as the representative of Greece reiterated a request for details on its private sector funding. President Recep Tayyip Erdoğan runs Ensar through his son Bilal Erdoğan and its founder Hayrettin Karaman, a leading theologian and chief fatwa (religious edict) giver for Turkey’s repressive regime.

“In addition to its public sources, Ensar is funded by companies having close links to Turkey’s ruling Justice and Development Party (AKP). According to recent Turkish media reports, the Turkish Red Crescent confirmed a donation of $7.925 million to Ensar. Turkish media revealed documents confirming that Başkentgaz, Turkey’s second largest gas distribution company based in Ankara and owned by Torunlar Holding, transferred the amount to the Turkish Red Crescent in December 2017, with consent for the organization to give the funds to the Ensar Foundation.” said on online newspaper Nordic Monitor.

Ahval, April 14 2021 Ahmet Altan, a Turkish journalist sentenced to prison in the aftermath of the failed coup in 2016, had his conviction overturned...
Read more
OBSERVATOIREDE LA TURQUIE CONTEMPORAINE