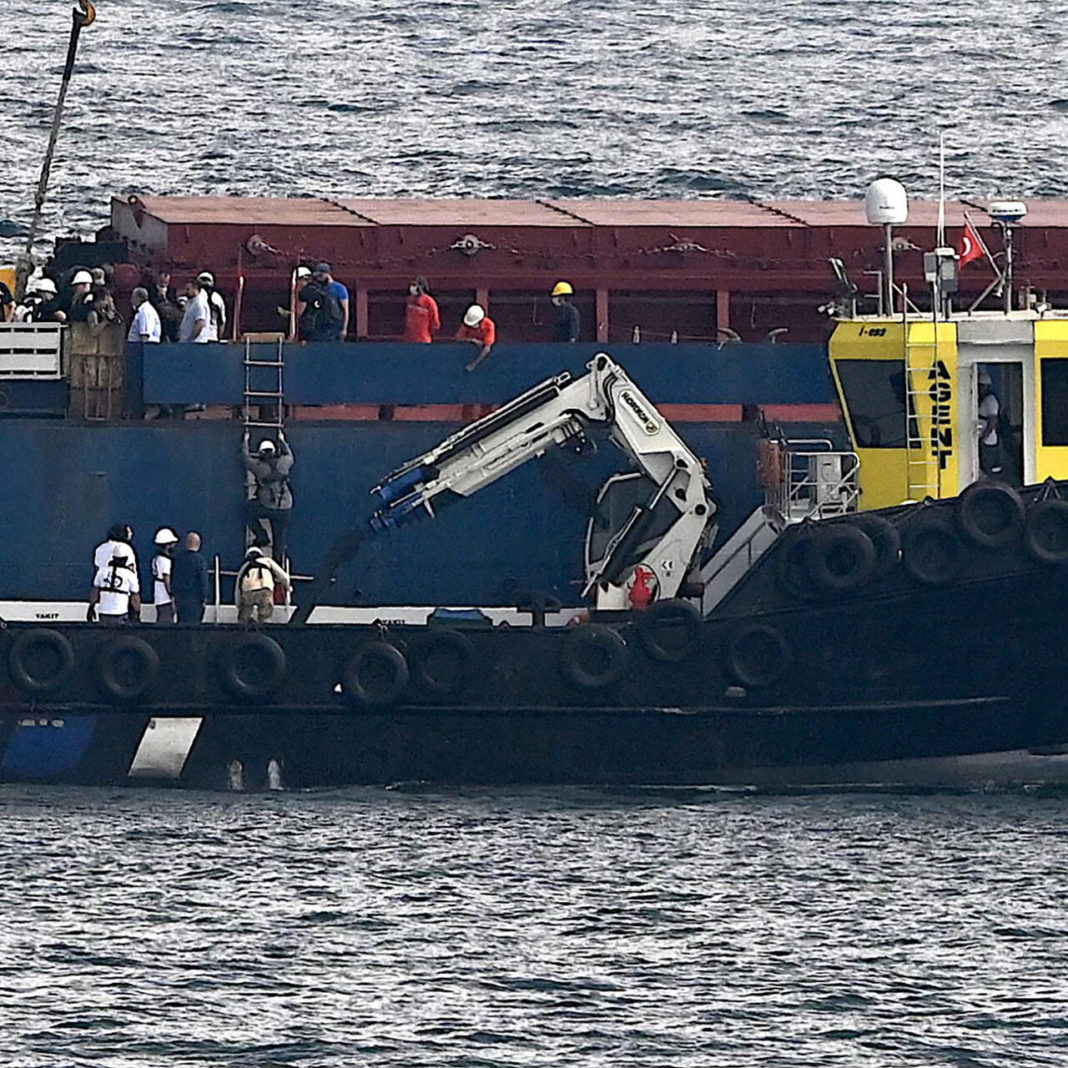 Selmin Seda Coskun from the Thomas More Institute in Paris wrote in Panorama, Online of the 4th of August 2022, an indepth article about the consequences of the cereal deal for Turkey.

« On 22 July in Istanbul, Russia signed a United Nations (UN)-backed deal with Ukraine, Turkey and the United Nations (UN) on grain shipments that would allow the export of Ukrainian grain, which had been blocked in Black Sea ports for five months due to the war, but the optimism has been short-lived. Russia, which had pledged not to launch any attacks during the transport of grain through Ukraine’s Black Sea ports in accordance with the deal reached, launched a missile attack on the port of Odessa a day later, causing damage to its infrastructure.

The deal on grain shipments provides for the opening of corridors in the Black Sea to allow the movement of merchant ships to remove 25 million tonnes of grain trapped in Ukrainian silos. It was decided to resume the opening of the Ukrainian ports of Yugny, Odessa and Chornomorsk for the outflow of grain within a few days. This process will initially be valid for four months, and will be automatically renewable if successful. Istanbul was designated as the control center of the corridor. In line with the action plans submitted by the UN and Turkey, it has been decided to carry out joint security checks at the entry and exit points of the ships and to ensure the safety of maritime transport along predetermined routes. The fact that a deal was reached has been welcomed by the world public opinion and seen as a diplomatic success of Turkey.

Any guarantee not to hit the ports by missiles ?

The most important point in the negotiations was the demand for the removal of mines placed by Ukraine along the coastline. Russia was demanding guarantees that the corridor would not lead to arms deliveries to Ukraine, while Ukraine for its part was seeking guarantees that Russia would not launch an attack through the mine-free corridor. Kiev was convinced that the clearing of the mines would be in Russia’s advantage if Russia’s goal was to seize the port city of Odessa in the coming days. Kiev therefore demanded guarantees that Russian forces would not launch an amphibious attack on Odessa before removing the mines.

Finally, the deal was reached on technical principles. Kiev received guarantees from Moscow that commercial convoys would not be attacked. However, there was no guarantee that their ports would be hit by missiles. On the morning of 23 July, it was reported that a missile had hit a silo in Odessa. It was stated that another missile attack fell in an area close to the silo, but there was no negative impact on the capacity and capability of the docks in that area. Russian officials announced that the attack targeted Ukrainian warships and an ammunition depot containing Harpoon anti-ship missiles supplied from the United States, and confirmed that they hit this warship as it threatened the grain corridor deal.

On July 26, Ukrainian President Volodymyr Zelensky announced that the Russian occupation forces mounted their attacks on Zatoka village in Odessa from 13 aircraft. Followingly, the Naval Forces of the Armed Forces of Ukraine reported that an air defense unit near the resort of Zatoka shot down a Russian aircraft that attacked one of the military infrastructure facilities.

Weakness of the deal, advantage of Russia

Russia’s statement on the attack makes it hard to predict its next move. Have these attacks put the issue of grain shipments back into crisis? Will attacks on Ukrainian port and maritime transport infrastructure continue? Having an accord is an achievement, but the lack of guarantees for its implementation and the uncertainty on the timetable are its biggest weaknesses. Could it be that Russia is taking advantage of this weakness to damage the infrastructure of Ukrainian ports and make grain exports unfeasible?

This would be a high probability. Since the beginning of the war, the balance of Russia’s naval power in the Black Sea has not favoured Russia. The sinking of the Russian warship Moskva on 15 April delivered a psychological blow to the Russians. On 30 June, Russian forces withdrew from Snake Island, which is in an important strategic position to control Ukraine’s west coast, indicating that Russia’s naval projection of power is not going well for the time being. The closure of the Straits to warships, moreover, limits the Russian navy’s room for manoeuvre in the Black Sea. Both Ukraine’s mine-strewn coastline and its progress in armaments, by recently acquired Harpoon anti-ship missiles, may be preventing Russia from incurring an irreparable loss.

However, it has already been four months since the Russian-Ukrainian war. The war between the two countries has clearly turned into a war of attrition. One of the Kremlin’s objectives in this war of attrition is likely the economic defeat of Ukraine. This is exactly what the blocking of grain shipments from Ukraine is doing. Nevertheless, Russia made the grain shipment deal after all. Is this agreement, then, an indication that Russia is backtracking on its strategy of attrition of Ukraine?

In fact, the deal could resume exports not only of Ukrainian grain, but also of Russian goods, which had been blocked by sanctions. This indicates that Russia has obtained a certain easing of sanctions in exchange for the unblocking of Ukrainian ports. Immediately after this easing, we witnessed the Russian mind raising its game one more notch in order to increase its own gains by armed attacks. The fact that Russia, which has so far carried out a missile attack in Odessa, hit a silo just after the grain shipment deal, may be an attempt to disable Ukrainian ports as soon as possible regardless of the deal. Disabled ports will make it difficult for Ukraine to export grain in terms of technical problems.

A difficult period for Turkey

Russia is accused of using grain as a blackmail tool against Ukraine, which exports 90% of its grain by ship, and of stealing Ukrainian grain and selling it through Turkish ports to Middle Eastern and African countries, especially Syria. As a matter of fact, the sighting of a Russian ship loaded with grain in a Turkish port in early July caused tension with Ukraine.

Furthermore, before the deal, Ankara was of the opinion that it was important to lift international sanctions against Russia to be able to reach an agreement so that a secure grain corridor could be realized. Whereas, Russia’s attacks on Odessa were met with a firmer reaction from the Western states.

In addition to all this, right after the Russia attack, Turkish Defense Minister Hulusi Akar said that Russia denied carrying out the strike on the Ukrainian port Odessa. Just a few hours after Akar said this, however, Russia officially claimed responsibility for the attack. How should one explain Ankara’s position after Akar’s statement?

The Turkish President stated that Istanbul has upped its diplomatic efforts to prevent any repercussions from the attack in Odessa, and urged Russia and Ukraine to follow through on their commitments to the deal regarding the export of Ukrainian grains. No doubt that Turkey’s role in the grain crisis allows it to increase its international prestige after hosting the inconclusive peace talks between Ukraine and Russia in March 2022. Nonetheless, it suffers from the erosion of its political and diplomatic reputation in the international arena. Indeed, Ukraine and many Western countries, while benefiting from Turkey’s role as a facilitator, are increasingly uncomfortable with what appears to be an overly conciliatory stance towards Russia. No matter how much effort Turkey makes, the continuation of Russia’s actions, which cast a shadow over the negotiations, will put Turkey in a difficult position. It is likely to be forced into a strategic choice in the foreseeable future considering its relations with the US, Russia, Ukraine and  the EU as well as its position in NATO. »

Selmin Seda Coskun has a degree in International Relations at Bilkent University. She completed a Master’s degree in International Political Economy and then obtained her doctorate at the Faculty of Political Science in Istanbul University. She started her career as an analyst in charge of political affairs for various diplomatic representations in Turkey. Concurrently, she worked as a professor in international relations at the Faculty of Political Sciences of the University of MEF (Istanbul). Selmin Seda Coskun is currently an associated researcher conducting Turkish studies at Thomas More Institut in Paris. She is also lecturer in political science at Paris Catholic University. She maintains academic studies on geopolitics in cyberespace at the University of Paris VIII. She is the author of Vekalet Savaşları ve Çözümü Zor Sorunlardaki Yeri [The Proxy Wars in International Conflicts] (Ankara, Nobel Bilimsel Eserler, 2021).

"Following the post-coup purge of supporters of Islamic preacher Fethullah Gülen from Turkey’s key public services, rumours abound that the vacuum was filled by...
Read more