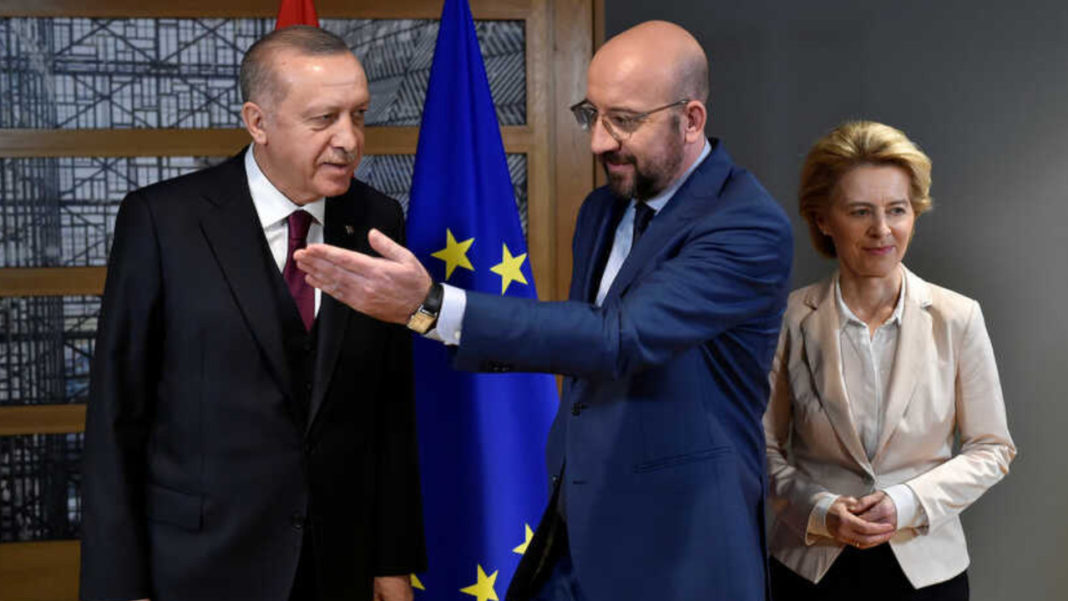 President Erdoğan is trying to conceal Turkey’s international withdrawal via anti-law, anti-human, anti-woman, anti-environmental domestic operations. He is pushing the limits in order to convert authoritarianism into totalitarianism. Within the international system, there appears to be a surface-level attempt at harmony out of necessity; however, Turkey is pitting neighbor against neighbor. Thus, the quest for normalization of foreign relations is horizon-less.

The ruling Justice and Development Party (AKP) government has seen many NATO summits and EU meetings. They have had family photos taken with world leaders, one-on-one meetings, trilateral meetings, etc. In doing so, they attempted to magnify themselves against their own people and put on airs for other countries in the region. It became a huge mission to legitimize NATO’s campaign in Afghanistan and the U.S. invasion of Iraq. They became “Muslim and democratic;” a partner and a ‘model’ for the Islam world. Since the Arab Spring, the ruling Justice and Development Party (AKP) leader Recep Tayyip Erdoğan also blew wind in those sails. Now he is going around one by one lowering those sails; in the eastern Mediterranean, in Libya, in Egypt, and in the Gulf.

President Erdoğan is trying to conceal this international withdrawal and shrinkage with several bold domestic operations violating Turkey’s separation of powers with anti-law, anti-human, anti-woman, anti-environmental decisions and initiatives. He is pushing the limits in order to convert authoritarianism into totalitarianism.

Within the international system, there appears to be an attempt at harmony out of necessity; however, domestically, we are seeing a fervent show of power. Just prior to the summit, the EU sent a message to Turkey asking them to take steps in the name of democracy and rule of law. President Erdoğan responded first by presenting the Human Rights Action Plan, followed by filing a suit to shut down the pro-Kurdish Democratic People’s Party (HDP), expelling HDP deputy Ömer Faruk Gergerlioğlu from parliament, and detaining Öztürk Türkdoğan, co-chairman of the Human Rights Association (İHD). He thinks he will be able to maintain his domestic power grip until foreign crises force him to relax. There are a number of examples that suggest this:

Foreign Minister Mevlüt Çavuşoğlu shook hands with U.S. Secretary of State Anthony Blinken in Brussels the other day. Unfortunately, this amicable display did not disperse the storm clouds which hung in the room: The S-400 issue is still at a deadlock and the Biden administration is saying that via a law (CAATSA) there is no space left to avoid sanctions. The U.S. is not interested in Ankara’s attempts at avoidance and refuses to accept a joint mechanism to address NATO’s concerns.

Additionally, the Halkbank case is at a breaking point. The repeated response from the Turkish government has been that “the Biden administration cannot interfere with the judiciary;” Twisting the meaning of separation of powers to use to their advantage. Perhaps there are whispers flying around the ‘palace’ that ‘poor’ Biden does not have the authority to influence Turkey. They certainly said the same about Barack Obama.

Of course, political entities are always trying to find ways to circumvent the law. While President Erdoğan is ready to make any concession on his own defective policies, the S-400 and Halkbank problems are unavoidable thorns. This is the catch in being a so-called partner to Washington, while also being a ‘precious partner’ on Brussels circles.

Such is the process of harmonizing relations with NATO; In other words, the return to exploratory negotiations with Greece after naval quarrels and navtex wars and the promise of not further stirring the waters in the eastern Mediterranean. The U.S. also sees NATO’s fine tuning of Turkish-Russian relations as essential. U.S. efforts to revive the Transatlantic Alliance is a power display for Russia. Such is the reason why they are reminding Turkey of its place in the alliance.

In furtherance of such carrot-and-stick politics, Turkey is hosting talks between the Taliban and the government to encourage them to leave Afghanistan: A carrot.

Next is Syria. After going through the points which the U.S. and Turkey cannot agree on, Secretary Blinken highlighted the countries’ joint interests in Syria and Afghanistan. In an article he wrote for Bloomberg, Erdoğan pointed to Syria as the place where cooperation will re-ferment. On this point the Turkish military presence is valuable in the fight against Syria and its allies.

The EU is eagerly embracing its role in guiding Turkey, as it is unable to execute foreign policy strategies without the U.S. The EU’s encouragement of Turkey includes authorizing European Commission negotiations regarding the Customs Union, renewing the refugee readmission agreement, and restarting high-level political dialogue.

If tensions are alleviated, Turkey will be praised. Otherwise, reprimand is likely to follow: Bans on exports and imports, travel barriers to undermine the tourism sector, restrictions on cooperation with the European Investment Bank and other financial institutions, which are important in financing energy and infrastructure projects, etc.

Relations with Turkey are being downgraded to trade and security only. Turkey is expected to be a barrier to migrants, stand up to Russia, participate in NATO operations, and provide cheap military power.

They are also expected not to depart from free market rules and regulations, to keep its economic appeal, not rollover on its debt, and be predictable in its decisions.

If Turkey’s sensitivities on these matters start to affect its economic interests, the country may be left without a plan. As the EU maintains its own inconsistencies parallel with Ankara’s, the AKP leadership can pick and choose when to participate in such an alliance.

Last week, German Chancellor Angela Merkel in a speech, spoke favorably of dialogue with an emphasis on “cooperation for the welfare of the EU.” She referred to Turkey as a “neighbor” and not a partner. She essentially said, “what we are doing is none of your business!” Sounds familiar, no?
The quest to adjust relations is beyond the control of the EU-U.S. axis. It extends to the coast of North Africa into Israeli waters and into the Gulf. They are all critical and interrelated, but incompatible. Thus, a diplomatic failure. This magnifies a very fundamental problem: mistrust.

Partnership with Egypt and Israel is being sought to counterbalance Greece and Greek-Cypriots. In order to make an agreement with Egypt, conflict with Libya must be deescalated, relations with the Saudi-Emirati axis must be stable, and a solution to the Muslim Brotherhood burden in foreign relations should be sought. Egypt appreciates preparations to withdraw Syrian militias who had been transferred to Libya. Such developments will determine the final state of relations.

By taking such measures regarding the Muslim Brotherhood, Turkey is showing its intention to meet the most important condition set by Egypt. We are also seeing an effort in Yemen to re-secure its place in the heart of the Saudis. It is suggesting a Karabakh model for Yemen; Militias from Syria and Turkish drones are being offered up.

They are pitting neighbor against neighbor. Thus, the quest for normalization is horizon-less. The government has lost its hand in the game of give and take, which it fancies itself competent in. Once again, we are back to the era of capitulations, this time in regard to diplomacy.