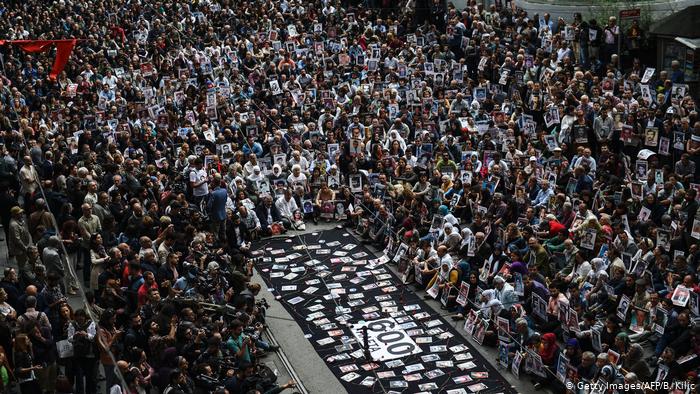 US Department of State has released its 2020 country report on human rights practices in Turkey, listing a series of violations of rights including “torture”, “limited steps to investigate and penalize members of security forces” and “violence against minorities.”

The State Department of the United States (US) has released its 2020 Country Report on Human Rights Practices in Turkey.

« Under broad antiterror legislation passed in 2018, the government continued to restrict fundamental freedoms and compromised the rule of law, » the US report has indicated, listing a wide range of violations of rights and freedoms committed in Turkey throughout 2020.

In the executive summary of the report, the following significant human rights issues have been listed by the State Department:

Listing these issues, the US State Department report has commented, « The government took limited steps to investigate, prosecute, and punish members of the security forces and other officials accused of human rights abuses; impunity remained a problem. »

Under Torture and Other Cruel, Inhuman or Degrading Treatment or Punishment, the report has shared the following details:

« The constitution and law prohibit torture and other cruel, inhuman, or degrading treatment, but domestic and international rights groups reported that some police officers, prison authorities, and military and intelligence units employed these practices.

« In July, Human Rights Watch reported there was credible evidence that police and community night watchmen (bekcis) committed serious abuses against at least 14 persons, including violent arrests and beatings, in six incidents in Diyarbakir and Istanbul from May through July.

« In four of the cases, authorities refuted the allegations and failed to commit to investigate. In one case on June 26, masked police allegedly raided former mayor and HDP member Sevil Cetin’s home in Diyarbakir city, setting attack dogs on her while beating her.

« On June 28, the Diyarbakir Governor’s Office released a statement refuting the allegations and stating authorities did not intend to investigate. »

The US State Department report has also drawn attention to the abuses committed by the members of the security forces, briefly saying:

« Clashes between security forces and the Kurdistan Workers’ Party (PKK) terrorist organization and its affiliates continued, although at a reduced level compared with previous years, and resulted in the injury or death of security forces, terrorists, and civilians.

« The government did not release information on efforts to investigate or prosecute personnel for wrongful or inadvertent deaths of civilians linked to counter-terrorist operations.

Reference to the elections

The report has also referred to the elections in 2018 through the reports of the Organization for Security and Cooperation in Europe (OSCE):

« In 2018 the country held early parliamentary and presidential elections that had been originally scheduled for late 2019. The campaign and election both occurred under a state of emergency that had been in place since 2016 and that granted the government expanded powers to restrict basic rights and freedoms, including those of assembly and speech.

« While most candidates generally were able to campaign ahead of the elections, the HDP’s candidate remained in prison during the campaign and the candidate for the IYI (Good) Party faced a de facto media embargo.

« Despite the ability to campaign, the observation mission of the Organization for Security and Cooperation in Europe (OSCE) noted the elections were held in an environment heavily tilted in favor of the president and the ruling party, noting, ‘The incumbent president and his party enjoyed a notable advantage in the campaign, which was also reflected in excessive coverage by public and government-affiliated private media.’

« The period between the April 2018 announcement of early elections and the vote in March 2019 saw a number of attacks on political party offices, rallies, and members, including some incidents that led to death and serious injury. Violence most commonly targeted the HDP and its campaigners.

« Opposition party members faced frequent accusations from the highest levels of government of alleged terrorism-related crimes. A number of opposition candidates for parliament continued to face legal charges in connection with such claims, and the HDP’s presidential candidate, Demirtas, was in prison during the campaign.

« The OSCE noted that key amendments were adopted within months of the early elections, without consultation, and were perceived as favoring the ruling party. » (PT/SD)