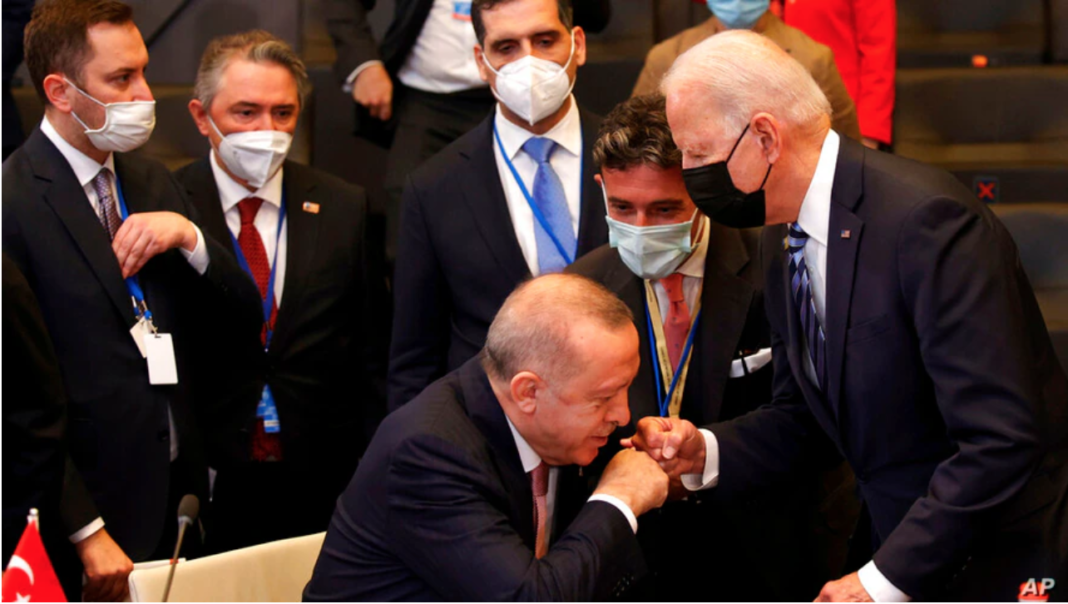 President Erdoğan has pushed Russia’s buttons by volunteering to serve U.S. interests in Afghanistan at last week’s Brussels meeting. Erdoğan will have to face Russian leader Vladimir Putin one day. He has too many deficits in that account. The ice that started melting in Brussels could freeze at any moment.

Just for a photo-op with Joe Biden, Turkey’s President Recep Tayyip Erdoğan kept pushing Russia’s buttons. He did so by selling armed unmanned aerial vehicles (combat drones) to Ukraine, by supporting Kiev in Crimea, by marketing combat drones to Poland (again) and, most recently, by volunteering to serve U.S. interests in Afghanistan by guarding their intelligence and diplomatic staff in the field. The intention was to end frustration caused by the S-400s and display an image of friendship to Turkey’s allies.

Former Prime Minister the late Bülent Ecevit must have gotten his revenge. Ecevit was teased for years for his photo op with Bill Clinton, which was regarded as disrespectful as Clinton sat on the back of a sofa while Ecevit was bent over. When Erdoğan met Biden, all the major news agencies simultaneously decided to use the same unfortunate moment on their front pages. The picture was taken from an angle that made it look as if Erdoğan was kissing the hand of Biden. No doubt, this was a misleading frame that did not reflect what was going on.

The 1999 image of Ecevit across Bill Clinton was also unfair. However, since then, the right-wing and Islamist politicians and policy makers have used it irresponsibly. Nevertheless, what goes around comes around.

It is necessary to point out that the Brussels meeting was a routine NATO summit, that all leaders participated, and that bilateral talks were held on this occasion. In other words, it was not a special summit organized for Erdoğan. Despite this, Erdoğan attributed extraordinary importance to it, along with his entourage, trying to turn the summit into an opportunity to escape the pressure he has been under domestically and internationally. So, what came out of this ‘extraordinary’ event?

The most significant result was confirmation of Turkey’s place in NATO. On a platform where political partnership has been crippled by mistrust, relations have been fixed at the security level. This cannot exactly be called a success. NATO has a bid for expanding the alliance’s defense parameters by adding political dimensions to them, while Turkey is the barrier that protects the alliance’s eastern borders – against Russia. The real loss is on that side. Erdoğan has been building bases from the Mediterranean to the Red Sea, from the Indian Ocean to the Gulf for several years. In his mind, he has taken the ‘independent Turkey’ to another level.

However, in the face of incompetence and forthcoming sanctions, his position is less than advantageous. Now he is calling NATO, saying, “From the Mediterranean to the Black Sea, from Europe to Asia, wherever the security umbrella provided by NATO is needed, the alliance must take an active role.”

He also boasts about Turkey being one of the five top contributing members to NATO operations. He is eager to do more. He is willing to enroll, more than ever, in the American-led global suppression apparatus. This is why he is so eager to undertake the mission to protect the Kabul International Airport. Of course, Turkey has invested in Afghanistan since 2001, undertaking NATO’s civilian operations and now wants to receive credit. However, it is the U.S. agreement with the Taliban and the ongoing negotiations between the Taliban and the Kabul government that have set the terms for withdrawal. The Taliban says Turkey may be a partner of Afghanistan in the future, but now must leave because it is a part of the NATO invasion. No decision was made regarding this at the NATO summit.
This topic will surely be further discussed. However, Erdoğan has an appetite and imperial dreams that draw him near NATO. This pleases the alliance. NATO Secretary General Jens Stoltenberg is all smiles. Biden should be happy, too, but he is discreet because he wishes to get more out of Erdoğan. Hours after the 90-minute meeting, Erdoğan’s words were just these: “We had a positive and productive meeting. We had detailed discussions on how to proceed on a number of issues. Our teams are going to continue our discussions. I’m confident we’ll make real progress.”

While the White House did not issue any statement 24 hours after the meeting, Biden on Tuesday responded to a question about Afghanistan ahead of the U.S.-EU meeting: « We had long discussions, and I feel very good about our meeting. And I’ll let the Turks tell you about it.” This has more than one meaning. He does not want to spoil the artificial picture that made Erdoğan happy.

By progress, Biden means keeping Turkey in line. After all, the thorny issues remain in place: What the U.S. expects is that the S-400s will never be operational, that relations with Russia will be reviewed, that there is no return to the “Blue Homeland” adventure in the Eastern Mediterranean, that there is no proposal for a two-state solution in Cyprus, that the ongoing resolution process in Libya does not stumble due to Turkey’s military-militia presence, and that the animosity against the Kurds in Syria comes to an end. However, the Turkish side wants to find a middle ground that will satisfy both sides regarding the S-400s, an end to the CAATSA sanctions, returning Turkey to the F-35 program, support for the war against the PKK, discontinuation of support for the YPG, and the management of the Halkbank case. Erdoğan said he reiterated Turkey’s position on these issues. There is no sign or confirmation that the positions of the two parties are getting any closer.

A change in the attitude of the U.S. was not expected. For the sake of the first face-to-face meeting, these matters were glazed over. For Erdoğan, for the summit to be successful, the other side should have changed its attitude. If that were the case, we would have heard about it accompanied by fireworks.

Why was this kind of a fake image needed? First, this is the nature of international politics. Second, Biden’s emphasis on returning to Europe, his goal of recovering NATO, his target of building a strong front across Russia from the Baltics and Eastern Europe to the Black Sea basin and the Caucasus, all call for keeping Turkey by its side. As the U.S. withdraws from Afghanistan, strategic setup in Asia is at risk. The Taliban are returning just as strong. When the U.S. troops withdraw totally on Sept. 11, the U.S. hopes to keep control via a network of diplomatic, intelligence, and private security guards. For this reason, the presence of an allied component on the ground is vital. They also need partners who can affect political processes, especially those who are able to work with the Taliban.

In addition to Pakistan’s political-intelligence-logistic support, Turkey’s military presence on the field and its capacity to influence have become more important. Central Asia is one of the fronts repressing Russia and China. The U.S. would not leave this place to others after 20 years of fighting. Erdoğan is aware of Biden’s needs in this respect and is playing the game accordingly.

In return for his contribution, Erdoğan is hoping to develop a bilateral channel with Biden and achieve favorable changes in those troubling files. He wants a give and take. Biden, however, is aware that Erdoğan is in no position to stand his ground. Erdoğan may receive certain favors in return for his service to American interests. For now, the American side is in no rush. They did not even feel the need to make a statement. U.S. domestic politics is also not suitable for doing any favors for Erdoğan. The S-400s determine the mood in the Congress. Biden would not want to be blocked by congress because of Turkey before he passes his first 6 trillion-dollar budget.

Erdoğan said there are no issues within Turkey-U.S. relations that cannot be resolved, and that the areas of cooperation are wider. We know these words from the times when the ruling Justice and Development Party (AKP) was at the beginning of its path to power in 2002. From those days when they told the U.S. they would be “their men” in the “Greater Middle East Project.”

So, it seems we are back to square one. However, Erdoğan partners are not even confident in this. In the final statement of the EU-U.S. Summit, the only sentence regarding Turkey was: « We aim for a cooperative and mutually beneficial relationship with a democratic Turkey.” The Turkey they are seeking is not Erdoğan’s Turkey. Let’s say Erdoğan is ready to reset certain things because of his desperate situation. However, any transformation in foreign relations would require the breaking up of the domestic vicious cycle.

The nationalist, Ottoman unionist, and Islamist circle that dominates the administration has left no stability or predictability in international relations. When he is back in his natural habitat, as he was in Azerbaijan the other day, Erdoğan’s Ottoman unionist tendencies return. He has another dilemma, though. Erdoğan will have to face Russian leader Vladimir Putin one day. He has too many deficits in that account. The ice that started melting in Brussels could freeze at any moment.